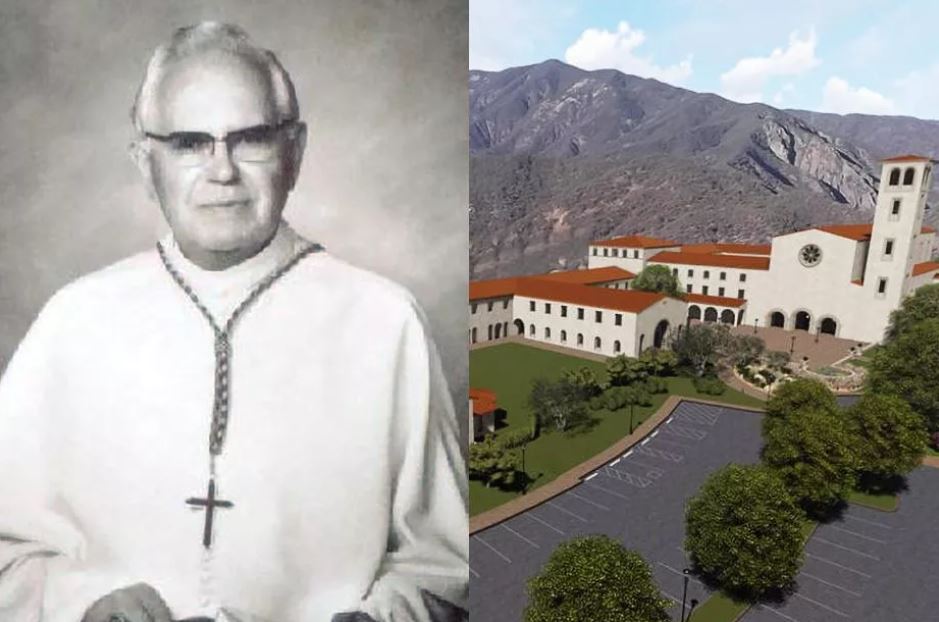 The Southern California Norbertines, who are known for their piety and orthodoxy, will soon have a new, larger abbey to accommodate their growing community.

It’s been 10 years since the death of Norbertine “Father Abbot” Ladislas Parker (1915-2010), one of seven founding Hungarian priests of St. Michael’s Abbey in El Toro. The community has grown steadily since its establishment in the early 1960s; its priests are known for their piety and orthodoxy, drawing many to join the community and necessitating the building of a new, larger abbey several miles away from its original site. Abbot Parker headed the community for 35 years until his retirement, and played a key role in navigating the abbey in a healthy direction in the turbulent years following Vatican II.

Born Dec. 19, 1915, in the Empire of Austria-Hungary, young Ladislas Parker grew up an only child to a widowed mother. From a very early age, he showed signs of a religious vocation. At age 5, he remembered his mother turning a kitchen stool upside down and standing him in the middle of the room, where he would imitate the gestures of his town’s parish priest in the pulpit. He faithfully served at Mass, and by age 11, knew he wanted to be a priest.

But the family vineyard needed a caretaker, and his mother and grandparents thought Ladislas the logical candidate. However, one evening, his grammar school teacher at the time, Steven Szomor, paid a visit to the future priest’s home and told Ladislas’ mother and grandparents, “It would be a shame not to send this boy on in school.” Putting aside concerns about the vineyard, the family agreed and enrolled Ladislas in a local Norbertine high school. Throughout his life, Abbot Parker kept a framed photograph of Szomor in his office, a reminder of the teacher’s fateful intervention in his life.

Ladislas entered the Norbertine high school and learned firsthand of the Norbertine order. Founded 900 years ago by St. Norbert, Archbishop of Magdeburg and Vice Chancellor for the Holy Roman Empire, the special charism of the order, explained the abbot, is “to combine the contemplative life of a monk with the active life of a parish priest, and to tie this work to the community in an abbey.”

The Norbertines are easily recognized by their traditional white cassock (which, according to pious belief, was given to St. Norbert by the Blessed Virgin Mary as a sign of her protection and favor) and their motto, “Prepared For Every Good Work.” The essence or “heartbeat” of the order is fervent devotion to the Holy Eucharist, central to Norbertine spirituality.

The order’s primary apostolate is the education and moral formation of youth, preparing them to be good Catholics as well as productive, stable members of society. Abbot Parker, who recognized the importance of this apostolate early in his career, opined, “I am convinced that a person’s basic character traits are developed by the 17th year. And, in the first six years, a child at home learns more than in the 60 years after. Consequently, parents have a tremendous responsibility. Without religion and faith, you cannot form children properly.”

In 1935, Ladislas was accepted as a novice at the ancient Abbey of St. Michael of Csorna, Hungary, and was ordained a priest five years later. Hungary was spared many of the worst ravages of World War II and Father Parker led a rather peaceful life as a young novice master in the early 1940s. Yet many of the challenges of his life were just beginning as he watched the communists come to power in his native Hungary after the war. Like the Norbertines, the communists saw the importance of the early education of youth, and began an intense struggle to wrest control of the state’s school system from the Church.

While the takeover of the country began slowly, the aims of the new communist government became clear in 1948, when it outlawed political parties and arrested Hungary’s famed primate, Cardinal Joseph Mindszenty (who, the abbot was proud to note, graduated from a Norbertine high school). The state then declared God a myth, a product of feeble men’s minds.

Father Parker responded to the state’s self-declared atheism by delivering a series of sermons defending the reality of God’s existence and the immortality of man’s soul. The authorities carefully watched the young priest. In fact, during one Lenten retreat in 1950, the secret police intervened and ordered Father Parker back to the abbey, declaring that his sermons were “undemocratic.”

By this time, government mandates had outlawed much of the work of the Church. On the evening of July 11, the abbey received word that a detachment of police was on its way to disperse the community and seize the abbey. Heeding the words of Christ: “When they persecute you in one town, flee to the next” (Matthew 10:23), Father Parker and fellow Norbertine Father Siard Haigli planned an escape to the free world. Five other abbey priests agreed to join in the plan. With their abbot’s blessing, they decided they would establish a community in an English speaking country, learn the language, and serve in their community. In five or six years, once the communists were forced from power, they would return to Hungary and their abbey (this process, in reality, was to take 40 years).

At midnight, the fugitive priests slipped out. They headed for the border across some of the country’s roughest terrain, reasoning that the authorities would be the least likely to expect an escape in this region. Along their escape route they dodged patrols, cut through barbed wire, tiptoed through a mine field and finally swam across a 60-foot wide river holding their clothes above their heads. A parish priest friend arranged their final 50-mile dash to freedom in the back of a pick-up truck across Soviet-occupied Austrian territory.

The seven fugitive priests were to later learn that their beloved abbey was converted into a government headquarters building, and the remaining Norbertines dispersed. They also came to realize the good fortune of their escape, learning of the capture of a group of Cistercians who were trying to escape by the same route a few weeks later.

Father Parker and his six brother Norbertine priests then booked passage on a ship to New York with $3,000 in borrowed money (“Money we paid back!” he later asserted.) They were welcomed to the Norbertine Abbey in DePere, Wisconsin, and went to work in parishes and schools for the next five years.

In 1957, Cardinal James McIntyre invited the seven priests to teach at Mater Dei High School in Santa Ana, California. By 1960, Father Parker and his fellow Norbertines had collectively earned $46,000 and purchased a remote strip of cattle-grazing land at the base of the Saddleback Mountains (in what would later become the Diocese of Orange, California), and established St. Michael’s Priory, named for the abbey of Csorna.

“There was not a tree in sight,” recalled the abbot. “We planted every one.”

Excited that they had finally re-established their community, the Norbertines knew they now needed vocations. Father Parker visited local diocesan high schools and preached to the students about the Norbertine way of life. By 1962, 29 young men had entered St. Michael’s newly opened junior seminary.

But the Norbertines’ excitement over their new community, and the initial rush of young men testing their vocations, was soon to end. At the close of the Second Vatican Council, many of the young people in religious orders and seminaries rebelled against the rigorous schedules and disciplines of religious life and left their communities. St. Michael’s was no exception. By 1968, all of the St. Michael’s seminarians had left; only Father Parker and the six Norbertine priests remained.

“We were depressed,” recalled the abbot.

But realizing that this time of desolation could, in fact, be a time for renewal, the seven priests gathered together and re-evaluated the purpose and direction of their community. Under Father Parker’s leadership, they affirmed St. Michael’s as “an institution specifically dedicated to the mind of the Church, the authentic and perennial sense of the vocation to religious life, a structured community prayer life and intellectual formation patterned after Augustine and Thomas Aquinas.”

St. Michael’s became a target of criticism in some Catholic circles, which labeled the Norbertine community as “arch-conservative” and “pre-Vatican II.” The abbot, sensitive to such criticism, responded with his favorite post-Vatican II motto, “At St. Michael’s, we seek ‘to hold steadfast to all that was good in the old, and not to shy away either from that which is new.’”

The years after the close of Vatican II through the 1980s were a period of steady recovery and rebuilding for St. Michael’s. The priory became better known nationally, and an increasing number of men from across the U.S. came to test their vocations. In time, St. Michael’s was able to establish several apostolates: a full time residence high school, a summer camp for 6- to 12-year-old children, the staffing of parishes and schools in Los Angeles, Orange, Riverside and San Bernardino counties and assistance provided at many local parishes.

A special honor came to St. Michael’s in 1984, when the Abbot General of the Norbertines and Pope John Paul II approved the conferral of abbey status on St. Michael’s. At this time, Father Parker received the title of “Father Abbot.”

In 1990, another milestone was achieved with the fall of communism in the Soviet Union and eastern Europe. Too old to return himself, Abbot Parker was able to send two young Norbertines back to Hungary to preach the Gospel and teach English. Forty years of communist rule had taken its toll on the original St. Michael’s Abbey in Csorna; however, a new abbot had been elected and a new generation of Norbertines began refilling the abbey.

Abbot Parker made more frequent trips to Hungary after his retirement in 1995, but was slowed down by illness, including Parkinson’s disease. He died in 2010 at the age of 94. Many turned out for his funeral Mass at Mission Basilica San Juan Capistrano, followed by his burial at Ascension Cemetery in Lake Forest, a short drive from the abbey.

From his initial community of seven priests in 1961, Father Abbot’s community has grown to include 49 priests and 48 seminarians. And, having outgrown their abbey, in 2018, the Norbertinesbegan construction on a new, $120 million abbey in Silverado Canyon, several miles from the original site, which is on schedule to be dedicated in early 2021. Although neither Father Abbot Parker nor the other founding Norbertines are still alive to see the dedication, they would no doubt be proud.