70 Years Ago, Pius XII Proclaimed Assumption — and Saw Miracle of the Sun 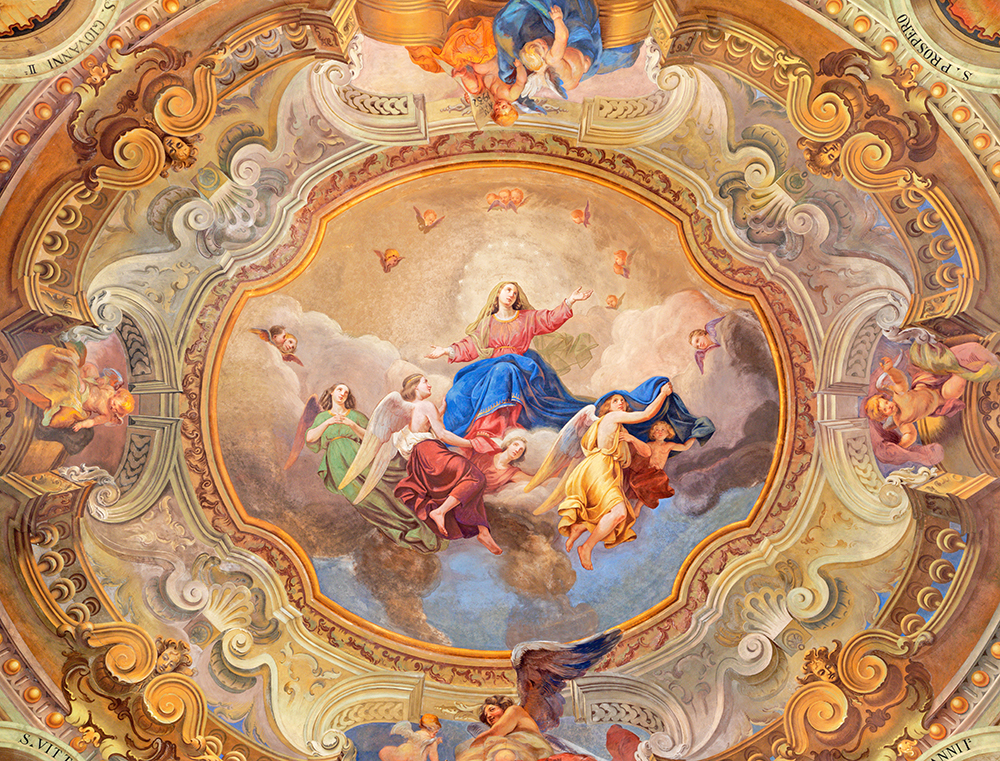 70 Years Ago, Pius XII Proclaimed Assumption — and Saw Miracle of the Sun

How does the Miracle of the Sun fit with this 70th anniversary of the declaration of the Dogma of the Assumption of the Blessed Virgin Mary?

It was 1950, and Pius XII saw the Miracle of the Sun. Not once, not twice, not three times, but four times. The banner appearance was on the day of the definition of the dogma. It was as heavenly gift, a heavenly smile, a heavenly thank you for what he did for the Church, our faith, and the Blessed Virgin Mary.

Let’s take a look at what happened.

Pius XII privately saw the Miracle of the Sun — the same phenomenon which had occurred Oct.13, 1917 — several times within days of his declaration of the dogma of the Assumption on Nov. 1, 1950.

“I have seen the ‘Miracle of the Sun.’ This is the pure truth,” the venerable pope wrote of the events that began just two days prior to his proclamation of the dogma. Years later he described the events in handwritten notes. They were on public display at a Vatican exhibit in November 2008, as recorded in Catholic news reports of the times. The Holy Father wrote that, at 4 p.m. on Oct. 30, 1950, during his usual walk in the Vatican Gardens, “I was awestruck by a phenomenon that before now I had never seen.”

“The sun, which was still quite high, looked like a pale, opaque sphere, entirely surrounded by a luminous circle,” he recalled, and he could look at it “without the slightest bother. There was a very light little cloud in front of it.” The Holy Father also said the sun “moved outward slightly, either spinning, or moving from left to right and vice versa.”

Pius XII related how he saw the same miracle again on Oct. 31 and Nov. 1, “the day of the definition of the dogma of the Assumption, and then again Nov. 8, and after that, no more.” He took it as a divine sign endorsing the dogma’s proclamation.

He proclaimed this dogma exactly 33 years after Fatima’s first apparitions. And here’s another tie-in. Pius XII was the first pope to publicly name and promote Fatima. And he was the first pope to try to do a consecration to Mary’s Immaculate Heart as Our Lady requested at Fatima. No wonder.

InMunificentissimus Deus(Defining the Dogma of the Assumption), he referred to himself as “we, who have placed our pontificate under the special patronage of the most holy Virgin, to whom we have had recourse so often in times of grave trouble, we who have consecrated the entire human race to her Immaculate Heart in public ceremonies, and who have time and time again experienced her powerful protection.”

So why shouldn’t heaven’s smile to him on, and around, the dogma of the Assumption’s proclamation be in the form of the Miracle of the Sun?

Exactly on the Solemnity of the Assumption in 1950, that day Lucia of Fatima was being interviewed by Carmelite Father Howard Rafferty, when he noted that books so far did not list the scapular as a necessary part of the Fatima message. He made it very clear in his report: “Lucia said immediately, ‘Oh, they are wrong; Our Lady wants all to wear the scapular.’”

The priest asked if Mary wanted the scapular as part of the message. Lucia said, “Yes.” And she added, “Now the Holy Father [that was Pius XII she was referring to] has already told this to the whole world, saying that the scapular is a sign of consecration to the Immaculate Heart. Nobody can disagree now.”

Another time she said that at Fatima Our Lady of Mount Carmel held and showed the brown scapular “Because She wants everyone to wear it. As Pope Pius XII has said, ‘It is the sign of consecration to Her Immaculate Heart’”

Father Rafferty persisted — was the scapular also a condition of the Fatima message? “Yes, certainly,” Lucia answered. “Yes, the Rosary and the scapular are inseparable.”

Again, this happened on the Feastof the Assumption.

Let’s take a look at just a few of the words of Pius XII in that document, Defining the Dogma of the Assumption.

“Now God has willed that the Blessed Virgin Mary should be exempted from this general rule. She, by an entirely unique privilege, completely overcame sin by her Immaculate Conception, and as a result she was not subject to the law of remaining in the corruption of the grave, and she did not have to wait until the end of time for the redemption of her body.”

Thus, from the universal agreement of the Church’s ordinary teaching authority we have a certain and firm proof, demonstrating that the Blessed Virgin Mary’s bodily Assumption into heaven —which surely no faculty of the human mind could know by its own natural powers, as far as the heavenly glorification of the virginal body of the loving Mother of God is concerned — is a truth that has been revealed by God and consequently something that must be firmly and faithfully believed by all children of the Church.”

“Nor can we pass over in silence the fact that in the Rosary of Mary, the recitation of which this Apostolic See so urgently recommends, there is one mystery proposed for pious meditation which, as all know, deals with the Blessed Virgin’s Assumption into heaven.”

Pius XII cited several saints and holy writers already for centuries teaching about Mary’s Assumption into heaven as they used “various images and analogies of Sacred Scripture to illustrate and to confirm the doctrine of the Assumption, which was piously believed. The Evangelical Doctor, St. Anthony of Padua, holds a special place. On the feast day of the Assumption, while explaining the prophet’s words: ‘I will glorify the place of my feet,’ he stated it as certain that the divine Redeemer had bedecked with supreme glory his most beloved Mother from whom he had received human flesh. He asserts that ‘you have here a clear statement that the Blessed Virgin has been assumed in her body, where was the place of the Lord’s feet. Hence it is that the holy Psalmist writes: ‘Arise, O Lord, into your resting place: you and the ark which you have sanctified.’” And he asserts that, just as Jesus Christ has risen from the death over which he triumphed and has ascended to the right hand of the Father, so likewise the ark of his sanctification ‘has risen up, since on this day the Virgin Mother has been taken up to her heavenly dwelling.”

Pius XII added “the Seraphic Doctor [St. Bonaventure] held the same views. He considered it as entirely certain that, as God had preserved the most holy Virgin Mary from the violation of her virginal purity and integrity in conceiving and in childbirth, he would never have permitted her body to have been resolved into dust and ashes. Explaining these words of Sacred Scripture: ‘Who is this that comes up from the desert, flowing with delights, leaning upon her beloved?’ and applying them in a kind of accommodated sense to the Blessed Virgin, he reasons thus: ‘From this we can see that she is there bodily…her blessedness would not have been complete unless she were there as a person. The soul is not a person, but the soul, joined to the body, is a person. It is manifest that she is there in soul and in body. Otherwise she would not possess her complete beatitude.’

“St. Robert Bellarmine exclaimed: ‘And who, I ask, could believe that the ark of holiness, the dwelling place of the Word of God, the temple of the Holy Spirit, could be reduced to ruin? My soul is filled with horror at the thought that this virginal flesh which had begotten God, had brought him into the world, had nourished and carried him, could have been turned into ashes or given over to be food for worms.’”

“In like manner St. Francis de Sales, after asserting that it is wrong to doubt that Jesus Christ has himself observed, in the most perfect way, the divine commandment by which children are ordered to honor their parents, asks this question: ‘What son would not bring his mother back to life and would not bring her into paradise after her death if he could?’ And St. Alphonsus writes that ‘Jesus did not wish to have the body of Mary corrupted after death, since it would have redounded to his own dishonor to have her virginal flesh, from which he himself had assumed flesh, reduced to dust.’”

Pius XII called it “the supreme culmination of her privileges, that she should be preserved free from the corruption of the tomb and that, like her own Son, having overcome death, she might be taken up body and soul to the glory of heaven where, as Queen, she sits in splendor at the right hand of her Son, the immortal King of the Ages.”

To finish, he said this to show Our Lady’s Assumption is a forerunner and promise for us and how we should act in this world looking forward to that: “Mary offers us may be more and more convinced of the value of a human life entirely devoted to carrying out the heavenly Father’s will and to bringing good to others. Thus, while the illusory teachings of materialism and the corruption of morals that follows from these teachings threaten to extinguish the light of virtue and to ruin the lives of men by exciting discord among them, in this magnificent way all may see clearly to what a lofty goal our bodies and souls are destined. Finally it is our hope that belief in Mary’s bodily Assumption into heaven will make our belief in our own resurrection stronger and render it more effective.