A Baptism in London’s Westminster Cathedral 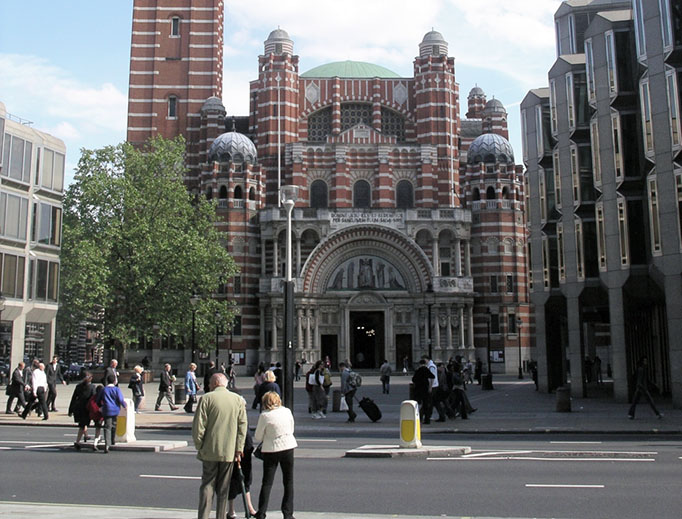 A Baptism in London’s Westminster Cathedral

So much seems strange and frightening, but the Church is alive.

London’s Westminster Cathedral seemed even larger than ever, and very silent. Under the coronavirus regulations, rows of chairs have been grouped together, with just a few labeled available for use. Only the sanctuary seemed alive — glowing with light, the great crucifix hanging above its entrance.

And then I saw S. beckoning me, from one of the choir stalls right up in the sanctuary, and things began to feel normal and welcoming again.

Normal — and yet not normal. This was a baptism, postponed from the Easter Vigil, when it would have been performed before a vast crowd, all holding glowing candles, spilling out into the London night afterwards, into a city that boasts that it never sleeps.

I had met S. on one of my Catholic History Walks, and she had impressed me with her interest and enthusiasm. When she emailed saying she was seeking baptism, and asking if I would be her godmother, I was touched and thrilled. I bought a white-and-gold Missal and planned what I would wear, how we’d celebrate. … Easter at the Cathedral is the great event of the year.

Instead, with churches closed throughout Holy Week and all of Easter, and for many weeks afterwards, here we were on this summer Saturday, spaced out carefully along the choir-stalls — probably the only time I will ever sit there.

What was it like, I pondered, when the first baptisms were performed, on this then-marshy spot along the Thames? A Romano-British group of converts, in the days of the Roman Empire? Or freshly-converted pagan Saxons a couple of centuries later, with Augustine coming up from Canterbury?

Certainly centuries later again, when Edward the Confessor built his Minster, baptism was a standard part of life for everyone. And then, in the 20th century, Pope St. John Paul II made history here, and in the 21st Pope (now Emeritus) Benedict XVI, celebrating Mass with vast crowds amid great goodwill, milestones in our story.

In this strange coronavirus baptism, history echoed around us. The candidates’ voices were young and strong as they made their promises. The splashing of water was generous — health rules insisted that water — duly blessed, be poured from a great ewer and not scooped up repeatedly from the font, and we’d been supplied with towels for some necessary mopping afterwards. S. looked solemn as the white garment was draped across her shoulders, and wore it proudly as we walked out into Victoria Street afterwards.

A strange Westminster bereft of crowds, with silent shops and a Parliament building currently under wraps because of repairs. Even the familiar outline of Big Ben has disappeared under scaffolding. The statue of Sir Winston Churchill has only recently emerged from protective boards, following insults and graffiti in recent riots. There is a somehow sad feeling in London at the moment.

But outside the Westminster Cathedral, new lines of people were already forming, eager for entrance. The Church is alive when so much else seems strange and even frightening. We went off to celebrate in a nearby pub. Baptism, new converts, and the promise of tomorrow.