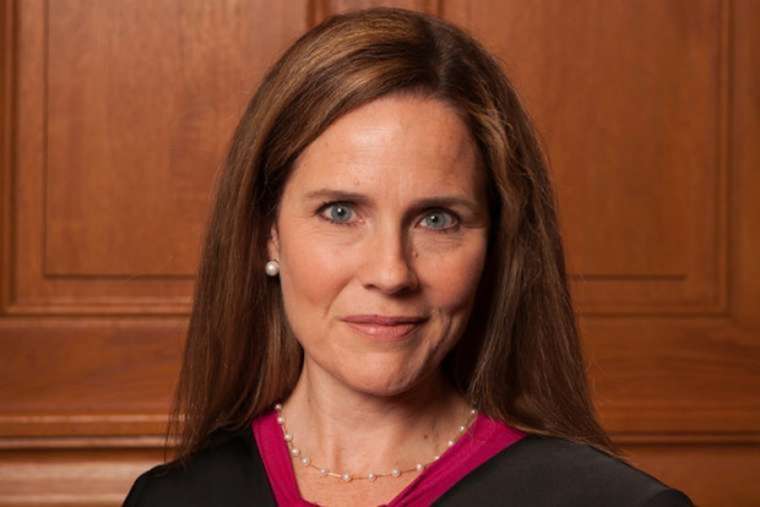 Supreme Court nominee Amy Coney Barrett is a “consensus-builder” who appliesthe law as written without consulting her own religious beliefs, according to her colleagues and fellow lawyers.

More than 95% of Barrett’s majority opinions on the Seventh Circuit court were unanimous, Barclay said, emphasizing her ability to unite colleagues around her conclusion.

Carter Snead, another Notre Dame law professor, wrote in the Washington Post recently that Barrett “has an incandescent mind that has won the admiration of colleagues across the ideological spectrum.”

“Time and again, I have seen her gently reframe a colleague’s arguments to make them stronger, even when she disagreed with them. And she is not afraid to change her own mind in the search for the truth, as I have seen in several of our faculty seminars,” he wrote.

As far as Barrett’s legal philosophy, it is that of “judicial restraint,” Notre Dame law professor Paolo Carozza told CNA.

When being considered for the Seventh Circuit court in 2017, Barrett was asked in writing by Sen. Dianne Feinstein (D-Calif.) how she defined her approach to the law. Barrett replied that she would apply relevant Supreme Court precedent—previous rulings by the Court—to determine a case; if the existing precedent was insufficient to settle the case, she said she would apply the text of the Constitution.

“Where precedent applies, it controls. If precedent does not settle an issue, I would interpret the Constitution with reference to its text, history, and structure,” she said.

This legal reasoning leaves the crafting of law to democratically-elected legislators and not judges, Carozza said.

In 2017, the influence of Barrett’s religious beliefs on her legal reasoning were questioned, with Sen. Feinstein notably telling her in person that “the dogma lives loudly within you, and that’s a concern.”

A 1998 article Barrett co-authored as a law student with law professor John Garvey was also the subject of questioning from Democratic senators. In the article, Barrett addressed the possibility of Catholic judges recusing themselves in capital cases, where the death penalty may be legal but their conscience might be opposed to its use.

Democratic senators asked her if she would rule in favor of the death penalty despite her conscience—or if she would recuse herself in another case where she might experience a conflict of conscience, such as an abortion case.

Barrett said in her response to written questions from Sen. Feinstein that “I cannot think of any cases or category of cases, including capital cases, in which I would feel obliged to recuse on grounds of conscience if confirmed as a judge on the Seventh Circuit.”

She added that, as a clerk to Justice Antonin Scalia, she worked on capital cases.

Barrett is strongly opposed to reaching a legal conclusion via any religious belief, Carozza said.

She believes that it is the “fundamental responsibility of the judge to do everything she can to keep her personal commitments from getting in the way of fidelity to what the law actually says, and what it meant to those who adopted it,” he said.

“And I think Amy takes that very seriously. So she will not interpret a provision of the Constitution or a federal statute in a way that’s simply designed to align with whatever her moral and religious beliefs are. She will be quite determined to set that aside.”

Asked by Sen. Mazie Hirono (D-Hawaii) about abortion in 2017, Barrett responded that, if confirmed, she would “resolve any case, including abortion cases, by engaging in the judicial process, which includes examining the facts, reading the briefs, conducting necessary research, hearing argument, consulting with colleagues, and writing and/or reading opinions.”

Barrett has been involved in multiple abortion cases at the Seventh Circuit, joining opinions or dissents that focused on Supreme Court precedent.

She heard a challenge to Chicago’s eight-foot “buffer zone” rule, barring pro-life sidewalk counselors from approaching within eight feet of an abortion facility.

Barrett joined the court majority in upholding the city’s rule, because of Supreme Court precedent in Hill v. Colorado. “While the Supreme Court has deeply unsettled Hill, it has not overruled the decision. So it remains binding on us,” stated the majority opinion to which Barrett joined.

Barrett also joined Judge Frank Easterbrook’s dissent in the case Planned Parenthood v. Commissioner of Indiana in June of 2018. Indiana had banned abortions that were based on the sex, race, or disability of a child, and had also required that the remains of aborted babies be cremated or buried.

Easterbrook—joined by Barrett—argued that Supreme Court precedent has not overturned sex-selective abortion or similar race or disability-based abortions. Regarding the fetal remains law, the court could not strike it down just by ruling that an unborn baby is not a person, Easterbrook said, noting that the courts elsewhere have upheld animal-welfare statutes out of respect for animals.

Barrett’s religious beliefs have been the subject of some discussion and criticism of late. In her 2006 commencement address to Notre Dame Law graduates, she exhorted graduates to “always keep in mind that your legal career is but a means to an end,” and “that end is building the kingdom of God.”

Barrett is also a member of the ecumenical group People of Praise, that has been described in the media as a “cult” where, according to a former practice, husbands and wives were given the Scriptural references of “heads” and “handmaidens.” Members originally formed a covenant where they agreed to tithe, live according to Christian beliefs, and meet regularly for acts of service.

Barclay, who previously worked at the religious freedom law firm Becket, has represented people of various faiths, and said that the practices of People of Praise “are totally commonplace across a lot of different religious practices.”

The group’s beliefs—and Barrett’s statement about “building the Kingdom of God”—are not uncommon, she said.

“After she graduated from law school, I wrote a one-line letter of recommendation for her to Justice Antonin Scalia: ‘Amy Coney is the best student I ever had.’ He was wise to hire her as a clerk,” Garvey wrote.

The Constitution, he said, guarantees “a tolerant pluralism in our country.”

Barrett’s opinions and dissents show that she focused on Supreme Court precedent and the text of existing laws to examine individual cases.

In one recent case on the court, Barrett ruled against the Trump administration in the case of an immigrant applying for a U visa.

In Yeison Meza Morales v. Barr, decided on June 26 and amended on Sept. 3, Barrett considered the case of a Mexican citizen who entered the United States as a child and applied for a U visa as an adult. When Morales was ordered removed by an immigration judge as his application was still ongoing, he appealed.

Barrett ruled that the order of removal was wrongly decided and allowed Morales’ petition for the case to be reviewed.

In another immigration case, Barrett denied the asylum appeal of an El Salvadoran citizen, saying that his asylum claim based on a fear of torture in El Salvador was too speculative and she could not over rule an immigration court under the existing legal standards.

In a fair wage case involving GrubHub drivers and overtime pay, Barrett authored the majority opinion that ruled against them.

The drivers had pressed for overtime pay under the Fair Labor Standards Act, and argued in court that they could not be compelled to arbitration under an agreement they had signed, as they were engaged in interstate commerce.

Citing Supreme Court precedent, Barrett ruled that the workers did not meet the definition of interstate workers actively involved in moving goods across state lines, and thus were not exempt under existing law from court-ordered arbitration.

While she never ruled directly on the Affordable Care Act, she was critical of the 2012 decision that upheld the law’s individual mandate, in a 2017 article in Constitutional Commentary. She wrote that Chief Justice John Roberts interpreted the law “beyond its plausible meaning to save the statute.”