A Lesson From ‘Animal Crossing’ About the Gospel 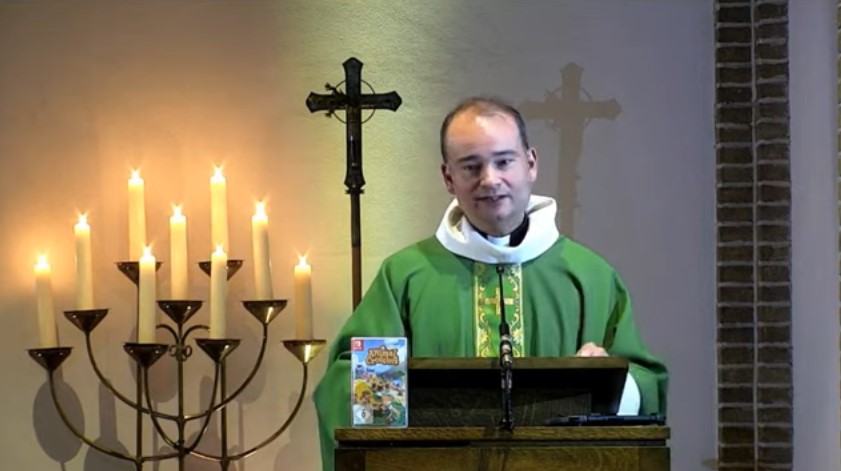 A Lesson From ‘Animal Crossing’ About the Gospel

“You have to be careful when you work in the garden.”

Father Roderick earned internet fame years ago when he posted his reaction to the Star Wars trailers in videos that will still put a smile on viewers. Father Roderick has posted a Mass from July 19 in which he makes an interesting comparison to the Mass readings to the hit Nintendo Switch game Animal Crossing: New Horizons.

“The game is called Animal Crossing … it’s a tiny planet.”

Animal Crossing is one of the fastest selling video games of all time, and the concept is simple: move into an island, cultivate it, make a home, invite neighbors, craft items, and build a community. Players can build their house, plant a garden, complete a museum, participate in fishing tournaments, and a lot more. The depth of the game allows for a highly customized experience.

Roderick describes the gameplay: building a town, getting animal visitors, cultivating gardens, giving and receiving presents from friends and the animal residents. He says “I have built my own island as well, it is called ‘paradisum,’ in Latin because I am a priest and it sounded cool to say ‘I’m going in paradisum.’” The island is named after the heavenly paradise.

Father Roderick takes the Catholic audience attending his Mass (or watching online) on his journey of discovering and eventually growing the game’s coveted golden rose. “It was shining in the morning sunlight. And I was so excited that immediately I wanted to water it and hope for more roses.” But his joy turned to frustration. “But then I noticed next to the rose where a couple of patches where weeds were growing. I wanted this golden flower to be the center! An so I walked to the weeds next to the rose and I thought I was going to uproot the weed…”

He explains how the Nintendo Switch joycon’s buttons are so small that sometimes, you don’t always make the action you wanted. “So I pressed A, and I thought I was going to take away the weeds, and instead, I took away the golden rose.” Weeks of work, gone.

He laughs, but you can see the disappointment still on the fact of the priest as he explains his reaction: “And I remember it like, ‘Ah, no, please, not that one!” and how “the only flower on my island that I wanted to preserve, I destroyed it by trying to take away the weeds.” He relates this personal story to the reading for that Sunday, July 19, 2020:

Jesus told them another parable:‘The kingdom of heaven is likea man who sowed good seed in his field.But while everyone was sleeping, his enemy came and sowed weeds among the wheat, and went away.When the wheat sprouted and formed heads, then the weeds also appeared.’

The owner’s servants came to him and said, ‘Sir, didn’t you sow good seed in your field? Where then did the weeds come from?’

‘An enemy did this,’ he replied.

The servants asked him, ‘Do you want us to go and pull them up?’

‘No,’ he answered, ‘because while you are pulling the weeds, you may uproot the wheat with them.Let both grow together until the harvest. At that time I will tell the harvesters: First collect the weeds and tie them in bundles to be burned; then gather the wheat and bring it into my barn.’

The parable is explained later in the reading:

Then he left the crowd and went into the house. His disciples came to him and said, ‘Explain to us the parableof the weeds in the field.’

‘As the weeds are pulled up and burned in the fire, so it will be at the end of the age.The Son of Manwill send out his angels,and they will weed out of his kingdom everything that causes sin and all who do evil.They will throw them into the blazing furnace, where there will be weeping and gnashing of teeth.Then the righteous will shine like the sunin the kingdom of their Father. Whoever has ears, let them hear.’

I think Father Roderick has the right idea for our generation, and for Catholics who play video games: Pause, and think before you judge. Watch the full video “Mass for Geeks” and homily in the video above.