A Spider With Purpose: Raymond Arroyo Pens Christmas Book for Children of All Ages 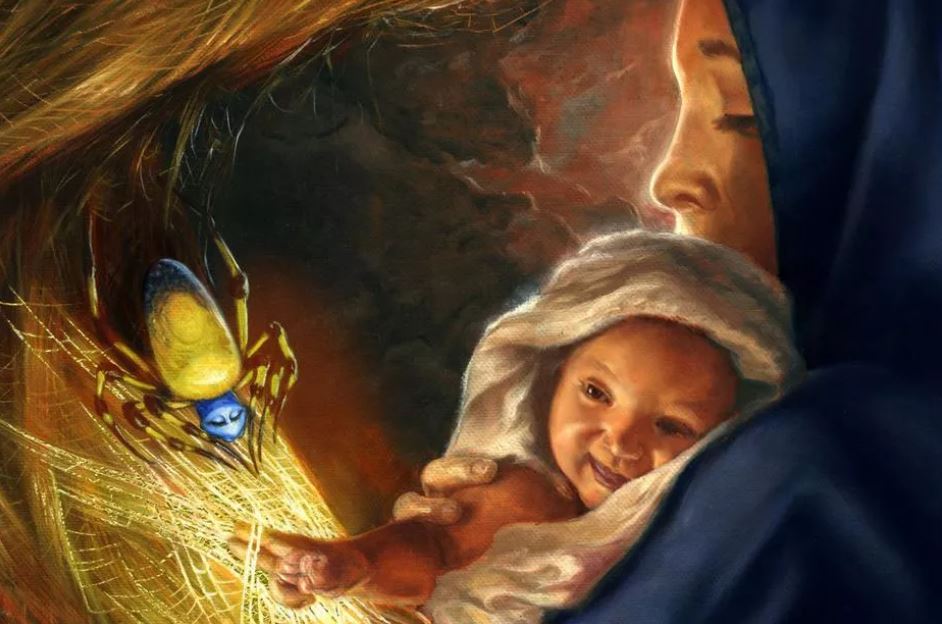 A Spider With Purpose: Raymond Arroyo Pens Christmas Book for Children of All Ages

‘The Spider Who Saved Christmas’ is a legendary tale shining the light of Christ.

Kerry Crawford and Patricia A. Crawford

The Spider Who Saved Christmas

The common thread that weaves through all of Raymond Arroyo’s endeavors is his ability to draw out a good story.

Arroyo, founding news director for EWTN (the parent company of the Register) and host and managing editor of the network’sThe World Over, is the author of a slate of books, including a biography of Mother Angelica and his popularWill Wilderadventure series for young readers in the middle grades. The launch of theWill Wilderseries was new ground for Arroyo, who is the father of three children.

In time for Christmas, Arroyo the storyteller does it again.

With the release this week of the touching picture bookThe Spider Who Saved Christmas,Arroyo reaches back in time to revive a nearly lost legend.

In the new tale, the Holy Family is on the move at night, fleeing to Egypt from Herod’s advancing soldiers. As they shelter in a cave, Nephila, a large golden-backed spider, dangles above Mary and the Child. Joseph slashes its webbing, sending Nephila into the shadows to protect her future: her sac of eggs.

As Joseph raises his staff again, Mary stops him. “All are here for a reason,” she cautions.

The Holy Family encounters a special helper in a dark cave in Egypt.(Photo: Sophia Institute Press)

Nephila later hears the far-away shrieks of children in peril. Seeing the Child Jesus, she knows what she must do — and does what she does best.

She spins. She weaves.

Her silken threads knit together into the intricate golden webs for which her family is known. Suspense builds as she and her older children work through the night. Will they finish? What will the soldiers find when they approach the open-mouthed cave in the morning? Can she protect this holy trio?

As good legends often do,The Spider Who Saved Christmastells a historical truth — the Flight Into Egypt — but, delightfully, adds so much more.

The Flight Into Egypt is the crux of this yarn with a Christmas theme.(Photo: Sophia Institute Press book cover)

Yes, Nephila is whimsical — indeed, a welcome addition to the Christmas canon.

However, and, this is important for young readers who revel both in elements of fantasy as well as accuracy, her behavior is spot-on. Like those of her descendants, the Golden Silk Orb Weavers, her webs gently lift and anchor in place, setting the stage for her to move back and forth to add the needed threads, both strong and elastic. It is so true to form that readers may wonder, if only for a fleeting minute, “Could this really have happened?” And, in the next moment, they wish only that it had.

The Spider Who Saved Christmasis at its heart apourquoistory. French for “why,”pourquoilegends are origin stories that explain how things came to be as they are — similar to the “Just So” stories of Rudyard Kipling.

Why do we hang shimmering tinsel as the final touch to our evergreen boughs? Why do many people in Eastern Europe, where this tale is rooted, still tuck a spider ornament among their tree decorations? Nephila, spinner of glittering webs, holds the answers and begs a question: If a tiny spider like her could sacrifice at such great cost, what can we do to embrace this Child of Mary?

She was there for a reason.”

Arroyo’s text and the illustrations of artist Randy Gallegos work in tandem to present the story as if it were a movie, moving dynamically but subtly from frame to frame. Gallegos’ work is dazzling in its brightness and contrasts. Readers need only to follow the light — the lantern in Joseph’s hand, guiding his young family into the darkness of the cave; the bright golden back of Nephila hard at work; the shaft of moonlight penetrating the recesses; and the sunlight glancing off the drape of webs in the morning — to be reminded that the light of Christ overcomes all darkness. This is a theme which young readers may gently absorb and grow in their understanding of as they revisit the story from one Christmas to another.

A good picture book is not for children only. In fact, C. S. Lewis, no stranger to writing for young readers, observed that “a children’s story enjoyed only by children is a bad children’s story.”The Spider Who Saved Christmas, the debut book in a larger “Legend Series,” will find a cherished home in the hearts of both parents and children alike.