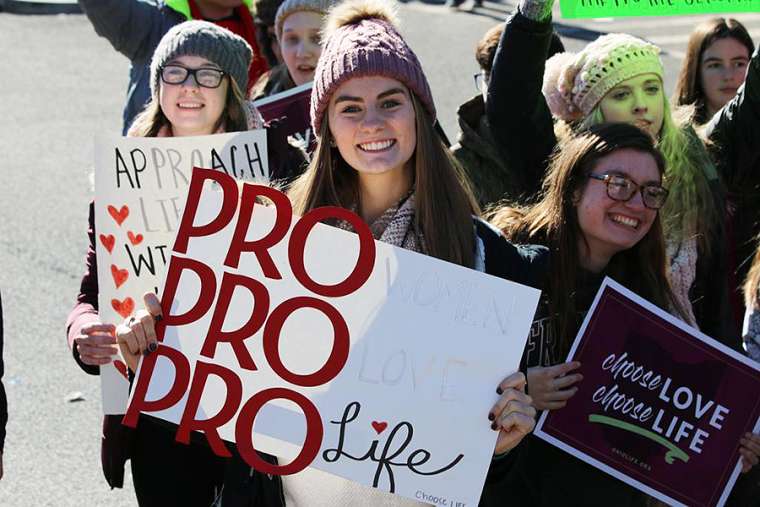 Abortion is a “fundamental threat to the beginning of life itself” and Catholics can’t be passive on the “pre-eminent” human rights issue, the right to life, Bishop Felipe Estevez of St. Augustine has said in a pre-election letter to his diocese’s Catholics about the importance of conscientious political participation.

“Pope Francis has made it clear that if we fail to protect life, no other rights matter. He also said that abortion is not primarily a Catholic or even a religious issue: it is first and foremost a human rights issue,” Bishop Estevez said inhis Oct. 7 letter.

He rejected the claim of those who say, “as a matter of faith, I am against abortion, but I cannot impose my belief on others.” Such claims reflect a commitment to the “false belief” that some human beings don’t deserve legal protection, said the bishop.

“It is not a matter of imposing a belief, but of being committed to the truth about human life, which, as biological science confirms, begins at conception,” he said.

Citing the Declaration of Independence, Estevez said the Founding Fathers knew that the right to life “surpassed all others in importance” because “without the right to life, none of the other rights could be protected.”

“The right to life was, and is, preeminent,” said the bishop.

He said the bishops are praying for Catholics who seek to be educated voters with well-formed consciences.

“This is a difficult time in our nation and a critical time to not only exercise your right to vote but to do so with the utmost integrity,” he said.

Discussing the importance of participation in public life, Estevez said that politics is about “securing justice in society” and is thus “a fundamentally moral activity.”

“While the Church and its clergy cannot endorse a particular candidate or political party, we do have a responsibility to encourage you to understand the issues in the context of Church teaching and to help you in this area of the ‘proper formation of your conscience’,” he said.

“As Catholics, our belief is that there are fundamental truths about the human person and society that are accessible to both faith and reason,” he continued. “We, therefore, have a right and a duty to participate in the public square in a way that reflects these truths, both for the good of our community and for the glory of the God who created us.”

He cited the words of the Our Father, when Christians pray to fulfill God’s will “on earth as it is in heaven.”

“We cannot with integrity pray the words of the Our Father or say ‘Amen’ when receiving the Eucharist, and then be passive on the issues that destroy God’s creation,” he said. “This is true for all people of faith, elector, and elected officials.”

“Some would prefer that Catholics and others of faith remain silent, or they will say that such beliefs have no place in the public square,” Estevez said. “Such views run contrary to our fraternal bonds and commitment to the common good as equal and valued citizens.”

He rejected the claim that focusing on “the preeminent issue of abortion” means the Church promotes “single-issue voting that will tend to support a particular candidate or party.”

“The Church will always act to promote the dignity and value of every human life from conception to natural death. We care about both mothers and their children, born and unborn, as well as the poor, the immigrant, the sick, the disabled, the elderly, those who are marginalized, and those on death row. We seek to promote a Culture of Life through our teaching and through our ministries, some of which are threatened by the extreme positions taken by some on issues of life and the family.”

“The political parties and their candidates have provided you with information that they believe will help you to understand their positions on issues that are important to you and for the good of the country,” he explained. “The Church engages in this political process by providing you with the faith context to judge some of these positions.”

Estevez spoke with CNA about his letter.

“It is very important that our citizens vote, and that they vote consciously reflecting on the spectrum of the entire social teaching of the Church and that they consider the intrinsic evils in a very prominent way,” he said Oct. 9.

“Like I say in my (letter’s) first paragraph: I don’t tell you who to vote for, that is your great and awesome responsibility,” the bishop said. “Please vote. It is a patriotic and common good responsibility.”

Estevez told CNA he put euthanasia on “the same level of intrinsic evils” as abortion, drawing from the teachings of Benedict XVI and St. John Paul II. “I think we need to protect as well our senior citizens. Regretfully, there are several states as well that do not protect them,” he said.

The letter includes a quotation from St. John Paul II’s 1995 encyclicalEvangelium vitae, addressing the case of “an intrinsically unjust law, such as a law permitting abortion or euthanasia,” in which the pope said “it is therefore never licit to obey it, or take part in a propaganda campaign in favor of such a law, or vote for it.”

Estevez said that in his letter “I enumerate all the other issues, including the death penalty, which are you aware is on the other side of the political spectrum, Republican and Democrat.”
He said the diocese and the Florida Catholic Conference had done much work to provide Catholics with a list of issues presenting the positions of the political parties.

However, he decided to write the letter after continued requests from laity who were “struggling with how to make a decision.”