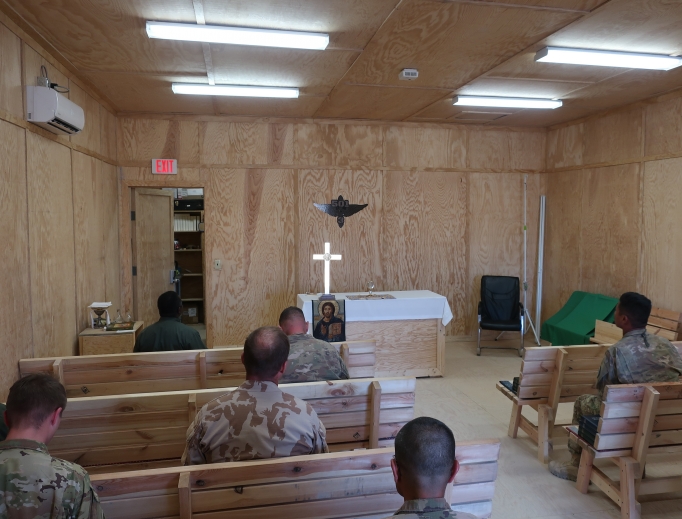 Military chaplain-priest explains the blessing of bringing the Eucharist to remote bases.

When Father Michael Creagan celebrates Mass at his Minnesota parish on certain days, the military boots visible beneath his chasuble reveal he’s headed for a drill weekend as an Army National Guard chaplain.

They’re also evidence of his call to bring the sacraments and pastoral support to not only his large suburban Minnesota parish but to military men and women in the U.S. and abroad.

Last spring, the 49-year-old diocesan priest left his cassock and full schedule at St. Joseph parish in West St. Paul, Minnesota, and donned military fatigues for deployment in Afghanistan. There as a chaplain, he served at remote mountainous bases, bringing the Eucharist to soldiers at Mass, in Communion and in adoration.

The experience of Father Creagan, National Guard chaplain for the 347 RSG in Brooklyn Park, Minnesota, reveals the desire of servicemen and women for the Eucharist. It also emphasizes the need for more Catholic priests to serve as military chaplains.

When a chaplain friend first suggested the cheerful, shaved-headed priest consider becoming an Army National Guard chaplain in 2012, Father Creagan told his friend he was too busy. He didn’t think he could take on military service while pastoring more than 1,900 families and overseeing a Catholic school.

But as part of the discernment process, he brought up the idea of becoming a chaplain with his spiritual director and then his archbishop, who both offered encouragement to go forward.

The military wasn’t entirely unfamiliar to Father Creagan. Though he grew up less than 20 miles from St. Paul in Hudson, Wisconsin, Father Creagan was born on an Air Force base in Japan, where his father was serving at the time. Some of his other relatives also belonged to the military.

In 2015 Father Creagan was deployed to Kosovo and tasked with assisting the U.S. soldiers during a NATO mission maintained by partner nations. He offered direct religious support for Catholic servicemen and women and assisted non-Catholics in practicing their faith.

Last year he was deployed again, this time to the Middle East. From May through August, he was assigned specifically to support the U.S. Catholic soldiers at another NATO mission by offering them the sacraments and pastoral counseling, as well as bringing them Communion if their work prevented them from attending Mass. Kosovo had been relatively peaceful, but Afghanistan was an active area with some conflicts and casualties, he said.

Father Creagan was stationed at Bagram Air Base located in northeastern Afghanistan. The largest U.S. military base in the country, it is staffed not only by the U.S. Air Force but also by rotating units of the Army, Navy, Marine Corps, Coast Guard and the NATO-led military mission called the International Security Assistance Force. For safety and speed, Father Creagan regularly traveled by helicopter to serve several smaller military bases. At one especially remote base, where the servicemen and women only had access to the sacraments every two weeks, Father Creagan met a soldier while sitting outside the chapel. He discovered that not only was the young man also from the Minneapolis-St. Paul area, but he knew the soldier’s home parish and his confirmation sponsor.

The soldier, Lt. Tom Batina, asked Father Creagan if it would be possible to have Eucharistic adoration at the base, and he told the young man he would try.

“It is not easy to offer Eucharistic adoration in a deployed environment, as everyone has busy schedules,” he said. “I was also on the move a lot, so it did not make it easy to establish a schedule.”

In the chapel at Bagram, Father found a small, eight-inch monstrance and brought it on his next trip to the remote base. The soldiers typically could spend about a half-hour in adoration before Mass, he said. “This necessitated carrying the Eucharist on the flight to the [base],” Father Creagan said. “I must add that those were some of the best flights!”

A few more times during his deployment, he offered periods of contemplative Eucharistic adoration in a designated sacred space on the base. Soldiers from four NATO partner nations also participated, he said.

“Meeting the young soldier from Minnesota really confirmed my mission of bringing the sacraments to Catholics serving far away in harm’s way, and it was also an added blessing that I would be serving someone from my own archdiocese,” Father Creagan said.

Along with offering adoration at the Minnesota soldier’s base, Father Creagan brought the Blessed Sacrament to another location. “I think many who have participated in Eucharistic adoration will speak about the incredible peace and comfort that Jesus offers in this contemplative prayer,” said Father Creagan, who added that he was moved by the soldiers’ desire for the Eucharist and their faithfulness in attending Masses. When he wasn’t traveling, the chaplain offered several daily Masses at the air base. Servicemen and women attended when possible, many of them commenting to Father Creagan that they “were so happy to be refreshed and renewed by Jesus in the Eucharist.”

A year later, Father Creagan is busy again at St. Joseph parish — now dealing with the challenges of COVID-19 — but he looks back at his Afghanistan deployment as a blessed opportunity serving as a chaplain major. “I was asked to bring the Catholic sacraments to soldiers in some very remote places,” he said. “Thanks to the wonderful help of many people from the chaplain assistants, soldiers helping to coordinate travel and leadership, I was able to participate in a great mission. It is an honor to serve our military, especially those who are deployed.”

Why medical students should learn...