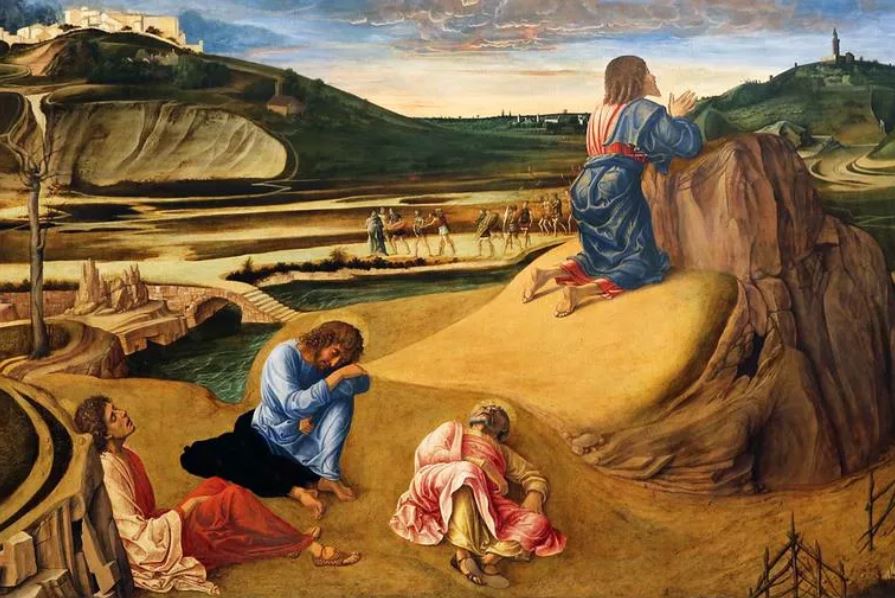 “Be watchful! Be alert! You do not know when the time will come.”

Welcome to the Advent series, “The Scriptures and Art.” The first and most important meaning of Sacred Scripture is salvation and, therefore, theological. That said, the Bible has had a huge impact on culture, particularly (although not only) Western culture which, paradoxically, Western man is increasingly losing sight of. In this series, we will reflect on one of the readings for that Sunday, not just from a theological but also an artistic viewpoint, i.e., from how that passage has been represented in a piece of art. We hope you find it enriching in many ways.

It’s hard to launch a series when your first Gospel — Mark’s citing the Lord’s injunction to be “watchful and alert” because the Day of the Lord comes unannounced and unexpectedly, whenever the lord of the house wants to come home — has not been depicted frequently in art. That said, let’s consider Giovanni Bellini’s “Agony in the Garden,” dating from ca. 1465, in conjunction with the First Week of Advent.

Launching into Advent with a Passiontide painting may seem out-of-place until we remember that the leitmotif of both Advent and the entire Christian life is Our Lord’s constant injunction: “Be watchful! Be alert!” Although the French poet Charles Péguy wrote a tribute to God’s gift of sleep [here and here], the truth is that the Bible repeatedly urges us to be awake and rise from sleep. Look up “wake” and “watch” in a biblical concordance and you’ll easily find more than 300 entries for each.

The year A readings for the First Sunday of Advent (last year’s) prominently feature Romans 13, where St. Paul calls on us “to awake from sleep, because our salvation is nearer now than when we first believed.” (Romans 13 used to be the Epistle for the First Sunday of Advent in the Tridentine Mass, before we had a three year lectionary, and remains the reading for the Extraordinary Form of the Mass for this day).

Christianity demands alertness and vigilance, because we are in a three-way struggle, with the world, the flesh, and the Devil (see Ephesians 2:1-3). That is essentially prefigured in the three temptations of Jesus (satisfy your bodily cravings by changing stones to bread, possess the world and its riches by worshiping the Devil and presuming upon God’s Fatherly care). We’ll revisit them on the First Sunday of Lent (in 12 weeks’ time).

We’re cautioned to “work out our salvation in fear and trembling” (Philippians 2:12) not because God is unfaithful but because we are inconstant. Bad things happen when people are not alert: the tares are sown among the wheat while the workers sleep (Matthew 13:25) and the lamps of the virgin bridesmaids flicker and go out while they doze (Matthew 25:5).

When people are not alert, they fail to notice things — important things — in their lives. In what I think is the best depiction of Dickens’ Christmas Carol — George C. Scott’s 1984 version — the Ghost of Christmas Past remarks that Scrooge’s nephew Fred looks a lot like his mother Fan, Ebenezer’s beloved sister. “I never noticed,” he remarks. “‘You never noticed? I’m beginning to think you’ve gone through life with your eyes closed. Open them! Open them wide!’” Good Christian advice. Don’t sleepwalk through life.

The worst thing that happens when we are not alert, when our eyes are not open, is depicted by Bellini: Jesus experiences his Agony in the Garden and is betrayed. Jesus finds Peter, James, and John fast asleep three times (which, in some sense, corresponds to Peter’s triple denial of Jesus) and even wakes them up twice, noting that even though “the spirit is willing but the flesh is weak” they should remain in prayer to avoid temptation (Matthew 26:41).

The key figures are all on an X-shaped cross: the three Apostles through Jesus, who is clearly the center of the painting, to the angel offering Him consolation; the elevated city of Jerusalem through Jesus and the rock on which he kneels, building the salvation he will offer through his Church. (A lesser line leads from the Kidron Brook bridge through Jesus to the fence on the right). Bellini’s painting, from the mid-15th century when the Renaissance was already influential in Venice, is part of what we call the “Quattrocento” period, where some medieval traces remain in the painting but Renaissance elements are already apparent, e.g., the dress of Judas’ party or the style of the Kidron Brook bridge that looks like it could easily span a Venetian canal.

Jesus and the Temple are set in clear contrast to each other: the New Covenant is presented not so much fulfilling as replacing the Old. While medieval painting may have ignored the material world in its emphasis on the spiritual, the landscaping of the scene (and the bodily shapes of the sleeping disciples) already show a Renaissance interest in focusing on this world as also revelatory of God’s Designs. Jesus is watching and waiting. Evil is awake and coming. The Apostles, about to be put to the test, are napping. [An old joke used to ask, “what is the Scriptural basis for the institution of the rank of monsignor? When Jesus told His disciples, “dormite iam et requiescite” (Matthew 26:45)].

What is wrong in Bellini’s painting is the sky: it’s dawn. His chronology is literally off. The biblical text tells us that when Judas leaves the Last Supper it was already “night” (John 13:30) — in a chronological sense for us and a spiritual sense for him.  Jesus speaks of the arresting party in Gethsemane as carrying torches and lanterns (John 18:3), absent in Bellini’s painting. The whole reason why Jesus’ trial before Annas and Caiaphas cannot be validated in Jewish law until morning (Luke 22:66-71) is that Jewish law forbade nocturnal trials.

Bellini obviously knew that, so why does he paint his sky? Perhaps Bellini wants to emphasize that a new day is dawning in salvation history. Perhaps he wants to underscore the Christ is the true Light of the World (John 8:12). Perhaps he wants to turn from the generally bleak depiction of the scene. Perhaps he has in mind Romans 13:11-13, that traditional First Sunday of Advent opening – “awake from sleep for your salvation is closer now than when we first believed. The night is far spent, the day draws near” when the sleepy-time Apostles need to gird themselves with the “armor of light” rather than rely on Peter’s knife play. The key figure of this event is acutely awake, even as He had previously “arisen early in the morning, while it was still dark, to go to a solitary place to pray” (Mark 1:35). And had he ever been more alone up until that moment?

God wants our salvation. The communion of saints, with Our Blessed Lady in the lead, support us in that effort, “now and at the hour of our death.” No one is saved alone, because salvation is always through Christ’s Body, the Church (Lumen gentium, no. 9 ). Pope Francis warns us of the danger of thinking we can “save ourselves” and to be worried only about ourselves as individuals. Ultimately, salvation is loving God and being loved by him — and we cannot love the God we do not see if we do not love the brother we do (1 John 4:20).

But no one else but me can derail my salvation. I can do that all by myself. As St. Augustine reminds us, “God who created you without you, will not save you without you.” Indeed, He cannot. No one — including God — can force me to love another. So, in that sense, before temptation and sin I am very much alone in terms of choosing my destiny. I can refuse his Grace. I can put him off. As St. Faustina Kowalska tells us (Diary, no. 8), she once had a vision of Christ reproaching her for not getting on with her spiritual life: “How long shall I put up with you and how long will you keep putting me off?” (emphasis added).

Advent is a time of watching and waiting for the Lord, not expecting Him who neither slumbers nor sleeps as He watches over Israel (see Psalm 121:4) to wait for us. While his future coming — at the hour of our death or at the end of the world – is unknown to us (Mark 13:33), it will be as unexpected at the return of the Master of the house (who, after all, should come home to take charge of all that is his – see I Corinthians 15:24-26). So, not with fear but with the alert joy that animates bridesmaids awaiting the heavenly nuptial feast, “Watch!”

Dorota Grondelski, an art historian, consulted on the painting.