After Discovering His Baptism, Ordination Were Invalid, Priest Speaks of God’s Grace 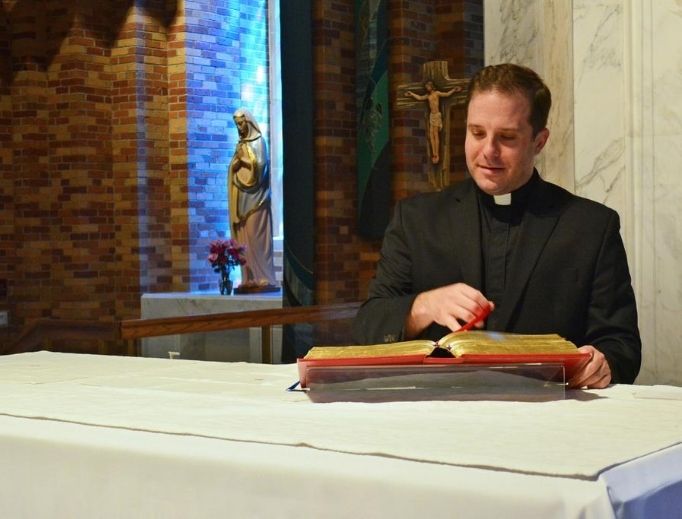 After Discovering His Baptism, Ordination Were Invalid, Priest Speaks of God’s Grace

Father Matthew Hood looks back on the sequence of events as surreal, but also divinely orchestrated.

“Lord, help there to be some drastic step in my life as I follow you to be faithful and holy and to be a saint,”Father Matthew Hood, a priest in the Archdiocese of Detroit, had prayed.

A week later, on Aug. 6, his world turned upside down. He discovered his baptism 30 years earlier was not valid and thus he was not a priest at all — and not even a Catholic.

As a non-baptized person, Father Hood could not even receive Holy Communion at Mass. The Catechism of the Catholic Church states: “Holy Baptism is the basis of the whole Christian life, the gateway to life in the Spiritand the door which gives access to the other sacraments” (1213).

“This was definitely drastic,” Father Hood told the Register. Father Hood had just been assigned associate pastor of St. Lawrence Parish in Utica, Michigan, following his service at Divine Child parish in Dearborn since 2017. The sacramental situation was remedied quickly, with Father Hood receiving the sacraments of initiation and getting ordained to the priesthood for real on Aug. 17.

But the wider ramifications for the Archdiocese of Detroit are still being addressed. Father Hood looks back on the sequence of events as surreal, but also divinely orchestrated.

It began with an old home video this past April. “My dad had extra time during quarantine, so he digitized our old family videos and emailed them to me,” Father Hood explained. “One said ‘baptism video,’ so I watched it expecting a heartwarming scene.”

Instead, he became startled: The deacon had used the wrong words.

Deacon Mark Springer, who was assigned to St. Anastasia Church in Troy, Michigan, from 1986 to 1999, had used an invalid formula. He said, “Webaptize you in the name of the Father and of the Son and of the Holy Spirit” instead of “Ibaptize you …”

“I knew right away that the words were wrong,” Father Hood said. He had written a paper about the words of baptism in his canon law class at Sacred Heart Major Seminary in Detroit. The ministers must allow Jesus to speak through them, by saying, “Ibaptize you in the name of the Father and of the Son and of the Holy Spirit.”

Not sure what to make of this, Father Hood reached out to a former seminary instructor, the archdiocese’s chancellor and a canon lawyer. “The Church had never spoken definitively on it,” Father Hood said. “There were other theological documents with a range of interpretations, but no Vatican document.” Since the Church presumes validity of the sacraments unless shown otherwise, his advisers told him not to worry about the mistake. And so, he did not. “Jesus said have no anxiety about anything,” Father Hood explained to the Register. “The people with more knowledge about this said I was good. I took their word for it and was not worried.”

Then, on Aug. 6, there suddenlywasa Vatican document addressing the words said during baptism. The Vatican’s doctrinal officeissued a clarificationon baptism, stating that changes to the formula that turn it into a community act are not permitted. The Congregation for the Doctrine of the Faith was responding to a question about whether it would be valid to administer the sacrament of baptism saying, “We baptize you” instead of “Ibaptize you.” No it would not, the Vatican office determined.

The document made clear that the minister of baptism is acting in the person of Christ who acts in his Church, and he does not have authority to modify the formula that has been entrusted to the Church.

“It is therefore understandable that in the course of the centuries the Church has safeguarded the form of the celebration of the Sacraments, above all in those elements to which Scripture attests and that make it possible to recognize with absolute clarity the gesture of Christ in the ritual action of the Church,” it said.

On that very day, Father Hood had just sat down for a parish meeting when he opened up his laptop and noticed an email from one of the professors he had conferred with earlier.

“He had sent the Vatican bulletin about the document on baptism,” Father Hood said. “I knew what that meant. I left the meeting right away.”

Father Hood received the Catholic sacraments of initiation — baptism, confirmation and the Eucharist — three days following the shocking news. The next day, a Monday, he went on a five-day canonical retreat. On Aug. 15 he was ordained a transitional deacon; and on Aug. 17 he was ordained a priest.

“It was a great consolation with how quickly it all happened,” Father Hood said. “That period of being an outsider was short. There was a grace, too.” He is convinced that discovering the problem like he did defies all odds and was surely God’s doing.

“The thing I’m most grateful for is that God’s concern for me came to the light through this,” he said. “What are the odds? It has to be God’s providence — my dad going through videos and sending it to me when he did, instead of letting them sit on a shelf for another 10 years, and then the Vatican coming out with the document only five months later.”

There are wider ramifications that must now be addressed. The Archdiocese of Detroitannounced the unusual circumstancesin a letter released Aug. 22 and provided adetailed guideas to what it all means.

“It is the duty of the local Church to ensure that everyone entrusted into her care has the full benefit and certainty that come from the valid reception of the sacraments, which have been given to us to keep us as secure as possible on the path to heaven,” Archbishop Allen Vigneron stated.“On behalf of our local Church, I am deeply sorry that this human error has resulted in disruption to the sacramental lives of some members of the faithful. I will take every step necessary to remedy the situation for everyone impacted.”

Ironically, while the confessions, confirmations and weddings are invalid, Father Hood’s baptisms are valid.

“In extraordinary circumstances baptism can be celebrated by anyone,” Father Hood said. “In almost every circumstance it should be a minister of the church — priest or deacon — but it doesn’t require a priest as long as the proper words, matter and intention are present.”

Absolutions performed by him in confession were not valid, but Archbishop Vigneron stated that “we can be assured that all those who approached Father Hood, in good faith, to make a confession did not walk away without some measure of grace and forgiveness from God.” However, he instructed anyone aware of any grave (mortal) sins confessed to Father Hood to bring those to confess at their next confession.

According to Father Hood, the RCIA adults he confirmed at Divine Child this past Palm Sunday and married over the last three years — 30 couples in all — have all been contacted by the archdiocese and the process of remedying their situations will take place during the next two weeks. The bigger task is contacting anyone baptized by the now-retired Deacon Springer. The archdiocese has been going through baptismal records and is working to contact all concerned. The archdiocese has also set up a websitefor anyone who believes they received an invalid sacrament, in order to learn what steps need to be taken. No other Detroit archdiocesan priests are believed to be invalidly baptized.

Father Hood hopes that his experience does not cause undue anxiety for anyone. “God clearly wanted me to know of my situation, but it should not be a reason for people to have anxiety about their baptisms unless they have clear knowledge for concern,” he said. “Any experience of the sacraments, even if they were celebrated invalidly, God was still present, and he still honors that. God doesn’t repent ofthe desire he’s given us to follow him and be faithful to him.”

What It Means If OCP’s Angel Is Mo...