After Hurricane Laura, priests’ support group responds to a ‘brother’ in need 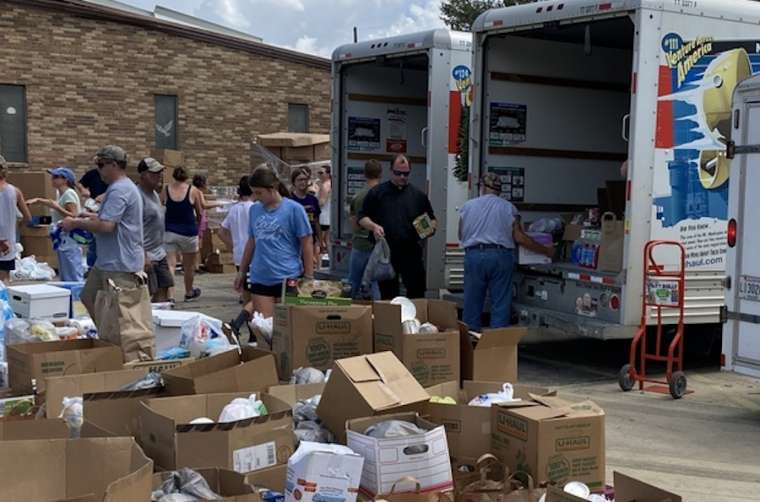 After Hurricane Laura, priests’ support group responds to a ‘brother’ in need

Support groups for priests provide ongoing camaraderie and spiritual nourishment, and now that list of benefits can be expanded to include hurricane relief.

The relief help also included hundreds of hot meals – mostly jambalaya and red beans and rice – cooked by the parishioners of Annunciation Parish in Bogalusa, where support group member Father Daniel Brouilette is pastor. Those staples of Cajun cuisine were passed out to more than a thousand cars with drive-thru service.

“It’s simply the gift of the priesthood – people being generous to one another,” said Father Starkovich, the spokesman for the Lake Charles Diocese who was ordained in 2011.

“I’ve never driven any truck like that before,” Father Howard said, laughing. “It got a little hairy at times.”

Father Hemelt said what touched him were his memories of Hurricane Katrina in 2005, when he was one of thousands of New Orleanians who needed help.

“I thought about it when I saw that line of people waiting to see all the volunteers,” Father Hemelt said. “Fifteen years ago, I was in one of those lines waiting for supplies. The amazing thing is the people volunteering are the same people who also lost their own stuff. They are unloading trucks, and they are probably in the same position as those coming for help.”

After Laura hit on Aug. 26, the support group members reached out to Father Starkovich and contacted their own parishioners about trying to mount a quick collection campaign. In addition to dropping off supplies, Our Lady of the Rosary parishioners donated about $10,000 in direct financial assistance.

Father Hemelt said he hoped Our Lady of the Rosary and St. Maria Goretti parishes could work together on a plan for long-term support of St. Pius X in Ragley.

Despite being stationed hundreds of miles apart over five dioceses, the support group members meet monthly for a meal and fellowship – the venue rotates – and they also try to vacation together annually, Father Hemelt said.

Hurricane Laura destroyed the St. Pius X office building and religion education classrooms, badly damaged the church roof and damaged the roof of the parish hall. But Father Starkovich celebrated the 8:30 a.m. Mass in the church on Sunday, and 65 people showed up.

“What really touched me is the people are so filled with hope and happiness,” Father Starkovich said. “Today everyone was joyful. We were short on volunteers, and we sent out a text message, and 50 volunteers came to the church in 10 minutes. They all left their own homes, which they were working on, to give food and water and supplies to everyone else. We had planned for 12 to 2. Well, it’s 9:30 to 5.”

Because there is no water or power at the parish plant, Father Starkovich is living temporarily with nearly two dozen family members at his parents’ home.

In addition to donations from the respective parishes of each support group members, Our Lady of Prompt Succor Parish in Chalmette and St. Luke the Evangelist Parish in Slidell also donated supplies.

“Most of our parishes are talking up collections to help with financial assistance,” Father Hemelt said.

“As one my parishioners told me,” said Father Howard, “after Katrina, we were hit so hard, and help was coming from all over the country. Now it’s our turn to return some of that help and support them.”

Father Starkovich said that message is not lost on Lake Charles Catholics.

“Our diocese helped New Orleans during Katrina, and now receiving that gift in return is a beautiful reality,” he said.