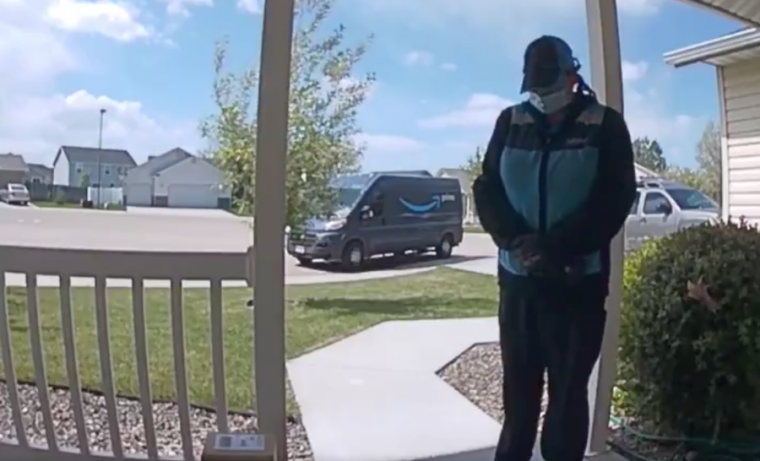 When Monica Salinas went to work on May 2, she didn’t expect to become a viral social media hit, or the subject of news features across the country. But she did. Because she took a moment to pray, and that moment was caught on camera.

Salinas, 41, delivers packages for Amazon in Idaho. A native of Texas, Salinas lives in Idaho, and along with her mother sings in the parish choir at St. Paul Catholic Church in Nampa, Idaho, outside of Boise.

On her May 2 route, Salinas saw a sign at the door of one customer that gave her a moment’s pause. The sign explained that a child with medical needs lived at the home, and thanked delivery drivers for delivering the supplies he needed.

The child, nine-month-old Lucas Pearson, has a cardiac condition that has led to feeding issues. He requires thickeners that were being delivered by Amazon.

When Salinas saw the note, she stopped to pray for Lucas.

“I was delivering a package and I saw a message on the door explaining that the baby at home needed many things and was grateful for us delivering things. It touched my heart,” Salinas told CNA.

“I said ‘‘Dearest God, please protect this family through your Precious Blood, and this baby, so that he may grow to become a man.’”

After she finished praying, Salinas made the sign of the cross, and left the porch.

Raquel Pearson, Lucas’ mother, saw Salinas praying through the video feature of her Ring doorbell. She was touched.

“My husband and I saw the video and started crying. We were very grateful that a stranger would take time out of her very busy day to pray for our baby,” she told CNA.

“We posted the video on Facebook and people started recognizing her.”

Indeed, people did start recognizing Salinas. The video went viral, and was shared more than 100,000 times. It was featured in national news broadcasts for several days.

“We both belong to a choir in our parish. She sings, she plays the guitar, she praises God with all her soul always,” Dora Salinas told CNA of her daughter Monica.

“That day she felt compassion for the sick baby and for his parents’ suffering” … That’s why she stopped there for a little while, just a little while to pray, because they (delivery people for Amazon) are always rushing, they have a very little time to deliver their packages,” Dora added.

“God has always been very important in my whole life…and I would like to let everyone know that God is good. I always tell people, every day, that God is good, one day at a time.”