Amy Coney Barrett and ‘building the Kingdom of God’ 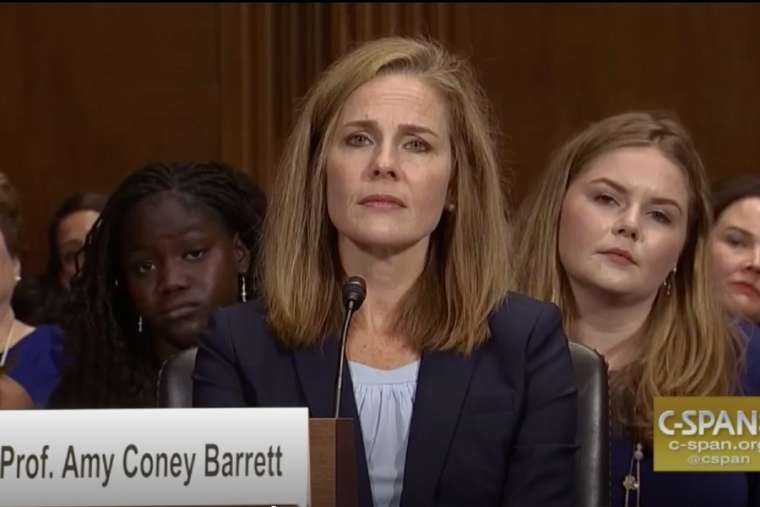 Amy Coney Barrett and ‘building the Kingdom of God’

Judge Amy Coney Barrett has been the subject of renewed criticism regarding her Catholic faith, following reports that she is a leading candidate for President Donald Trump’s nomination to fill the current Supreme Court vacancy. With much criticism focused on a comment she made in 2006, CNA asked experts what is means for Catholics to “build the Kingdom of God.”

A Catholic mother of seven, Barrett is a member of the ecumenical charismatic community People of Praise; her membership, along with her faith, was scrutinized in 2017 during her confirmation process to the federal circuit court.

In her 2006 commencement speech for Notre Dame Law School, Barrett exhorted graduates not to make their legal careers an end in and of themselves, but “a means to an end” that is part of “building the Kingdom of God.” Barrett is a judge on the Seventh Circuit Court of Appeals and a former professor at the University of Notre Dame Law School.

During Barrett’s confirmation hearings before the judiciary committee, Senate Sen. Dianne Feinstein (D-Calif.) observed to Barrett that “the dogma lives loudly within you, and that’s of concern.”

The liberal website Bustle,pointedto her remarks on “building the Kingdom of God” again in 2018 as an example of “why many liberals are worried about her potential nomination.” Barrett was reportedly being considered at that time to replace retiring justice Anthony Kennedy on the Court bench.

Barrett’s name is once again in consideration, as President Trump said he would announce on Saturday his nominee to replace the late Supreme Court Justice Ruth Bader Ginsburg, and the same line from her 2006 speech has been the focus of severalmedia profiles.

Matthew J. Franck, a lecturer in politics at Princeton University and senior fellow at the Witherspoon Institute, told CNA on Tuesday that Barrett’s reference to the “Kingdom of God” had nothing to do with building a theocracy or proselytizing.

“Anyone who reads into this that Judge (then Professor) Barrett wants them to pursue ‘the kingdom of God’ in the sense of some political project just isn’t interested at all in what she actually said,” Franck told CNA.

The full text of Barrett’s 2006 speech illustrates a wider point being made by her, that Notre Dame Law graduates are distinct, and the judge gave some practical career advice for aspiring Catholic lawyers.

At the beginning of her speech, Barrett asked graduates “what does it even mean to be a different kind of lawyer in the Notre Dame tradition?”

She went on to say that it wouldn’t necessarily entail practicing a specific type of law, or even in being ethical—as “maintaining high ethical standards ought to be something that characterizes our whole profession.”

Rather, she said, “one way” Notre Dame Law graduates could distinguish themselves is to “always keep in mind that your legal career is but a means to an end,” and “that end is building the kingdom of God.”

She went on to advise graduates against treating their career as an end in and of itself, such as through letting “ambition,” or “satisfaction, prestige, or money” guide their career decisions. She advised graduates to prayerfully discern job opportunities, tithe, and try to make friends with a similar faith wherever they move.

Theology professor Jacob Wood of the Franciscan University of Steubenville said that Barrett was not talking about any theocratic political project, but “was simply restating the teaching of Vatican II that the Kingdom of God is built up any time Catholics join with fellow citizens of any faith or none to work for the common good of our society.”

Such an effort, he said, “is at the heart of what it means to be a lay Catholic,” but is also “the very first thing a new justice promises to uphold when she or he takes the oath of office.”

Barrett’s comments, Wood told CNA said, speak to the power of God’s grace in human affairs–and to the tragedy of Catholics in public life who do not bring their faith into the public square.

Grace, he said, “presupposes, perfects, and empowers what we do as individuals and a society, by healing all of our cultural and political endeavors from sins that make them less than human, less than fair, and less than just, and restoring them to the basic goodness that God intended for them from the beginning.”

Many Catholics, however, overlook this and are “abdicating” their vocation to holiness.

For those who do bring their faith into the public square, he said, “politics and culture have nothing to fear from faith, and everything to gain,” as grace would empower a judge to serve “with a justice and fairness which is more powerful than ideology or political party.”

“Our nation desperately needs that justice and the peace it brings right now,” he said.

Incoming Supreme Court justices take an oath to uphold the Constitution as well as a second oath—or a combination of the two. In their oath, justices must swear to “administer justice without respect to persons, and do equal right to the poor and to the rich.”

This pledge to uphold justice, Wood said, is also part of the call of Catholics working for the common good.

Furthermore, Wood said, those who argue that Barrett might promote some kind of theocracy or would proselytize from the bench “are often trying to distract us from the real issue at hand.”

This issue, he said, is the imposition “by judicialfiatbeliefs about human life, gender, and marriage upon our nation that are contrary to the natural moral law which is present in the heart of every person.”

“That is why some people are worried about a faithful Catholic judge like Amy Barrett: not because she would impose her religious beliefs on our nation, but because they know that she would stand up against the political pressure to impose theirs,” he said.

Know some excellent parishes of th...