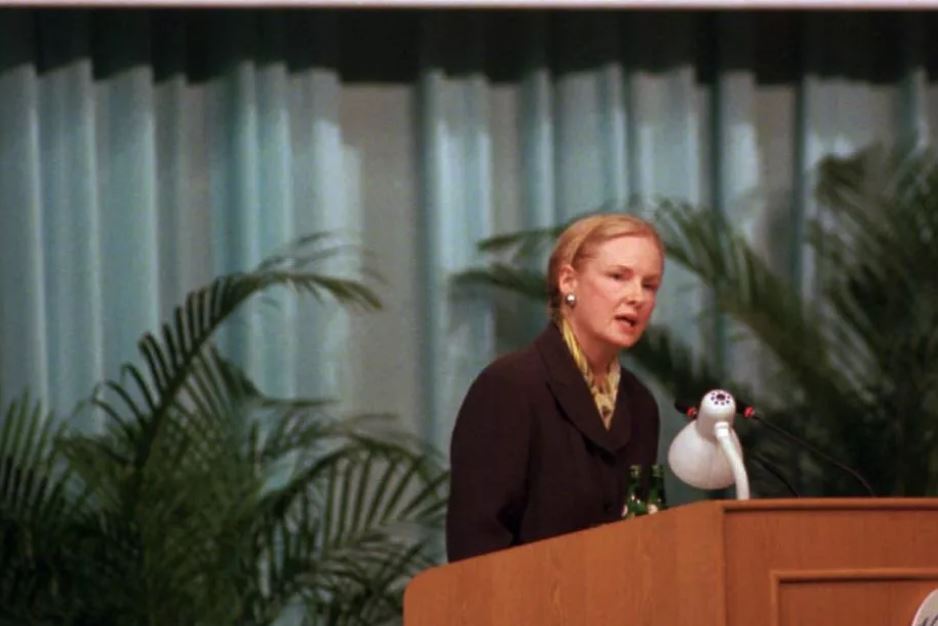 Glendon was at the center of the Catholic Church’s pushback against a kind of feminism that pitted women’s public contributions against their mission in the family and culture.

When President Donald Trump nominated Amy Coney Barrett for the Supreme Court last month, my mind traveled back 25 years ago to another September of high drama featuring another prominent Catholic woman. In September 1995, the U.N. Conference on Women was held — in Beijing, of all places — and Professor Mary Ann Glendon of Harvard was appointed by St. John Paul II to head up the Vatican delegation.

It was the first time a woman had been appointed to head a Vatican delegation. The previous year at the 1994 U.N. Conference on Population and Development in Cairo, the Clinton administration had committed American diplomacy to a determined push to establish abortion as a “universal human right.”

John Paul fought back with equal determination and led an international diplomatic coalition against the American administration. After a titanic battle, the Cairo conference’sfinal documentagreed that abortion should not promoted as a means of family planning. The Clinton push for a universal expansion of America’s unlimited abortion license had been defeated.

Similar forces gathered the next year for the 1995 Conference on Women in Beijing. The Clinton administration, led by First Lady Hillary Clinton, had been chastened in Cairo, so did not take the same aggressive lead. But others did, with the European Union — supported by Canada and South Africa — attempting to achieve by the back door in Beijing what the Americans had failed to achieve in Cairo.

Glendon was at the center of the Catholic Church’s pushback against a kind of feminism that pitted women’s public contributions against their mission in the family and culture.

“The implicit vision [in the preparatory documents] of women’s progress was based on the model — increasingly challenged by men and women alike — in which family responsibilities are avoided or subordinated to personal advancement,”Glendon wroteabout Beijing. “When dealing with health, education, and young girls, the drafts emphasized sex and reproduction to the neglect of many other crucial issues. The overall effect was like the leaning tower of Pisa, admirable from some angles, but unbalanced, and resting on a shaky foundation.”

As part of his efforts leading up to Beijing, St. John Paul II published aLetter to Women, which summarized the fuller teaching on the dignity and vocation of women that he had offered in his 1988 apostolic letter,Mulieris Dignitatem.

The Holy Father wrote of his hope that the Beijing conference “will bring out the full truth about women.”

“Necessary emphasis should be placed on the ‘genius of women,’ not only by considering great and famous women of the past or present, but also those ordinary women who reveal the gift of their womanhood by placing themselves at the service of others in their everyday lives. For in giving themselves to others each day women fulfil their deepest vocation. Perhaps more than men, women acknowledge the person, because they see persons with their hearts,” John Paul wrote.

The juxtaposition of the “feminine genius” and the appointment of Mary Ann Glendon led some sympathetic observers to note that the “feminine genius” was easier to achieve by, well, an actual genius like Glendon. Some critics were more pointed, accusing John Paul of proposing an impossible standard, where women could excel in professional advancement alongside their usual family responsibilities. Fine for Mary Ann Glendon, but what about the rest?

Fair enough. Catholic heroines like Mary Ann Glendon and Helen Alvare are hardly a norm. Then again, there are few men who would be their equal, either. The point was not that many women could achieve what Mary Ann Glendon — or Amy Coney Barrett — have achieved. It is certainly not to suggest that it is easy to “have it all” — it isn’t — but rather that women’s authentic advancement cannot make motherhood a hostile rival to professional contributions.

Amy Coney was a law student at Notre Dame when Glendon was representing the Holy See at Beijing. I don’t know whether she followed such things as a student, or was personally inspired by Glendon. But the generation of Catholic women leaders to which Barrett belongs have demonstrated the truths which Glendon expounded at Beijing on behalf of St. John Paul II.

Back in 2005, when President George W. Bush had to replace retiring Justice Sandra Day O’Connor, he chose Harriet Miers, a Texas friend who was so poorly qualified that she failed her nomination questionnaire — the Senate judiciary committee sent it back to her as incomplete. A bipartisan embarrassment, she withdrew from consideration but it demonstrated how cavalier Bush was about the Supreme Court. Republican voters remembered.

It is likely that her role at Beijing disqualified Glendon from a federal judicial nomination, but she would have been a deserving choice in 2005.