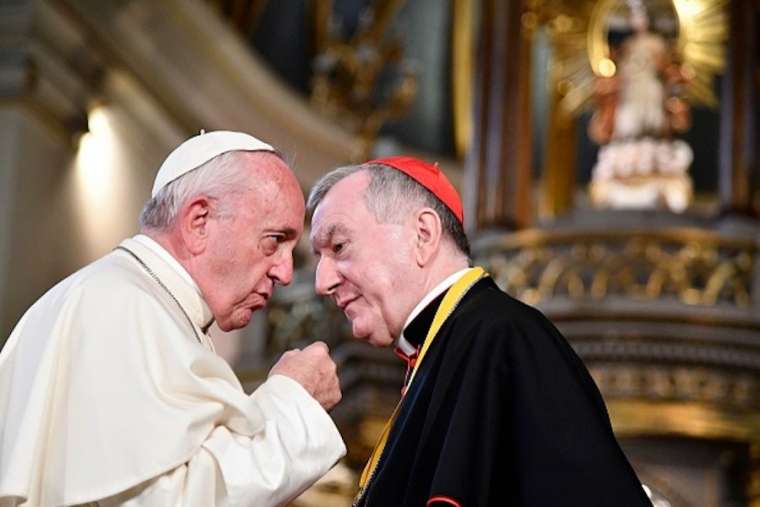 As details continue to emerge about a raft of financial scandals at the Vatican Secretariat of State, some observers have been left wondering at the apparent lack of urgency or interest in the Holy See’s response.

While vague updates have been issued about ongoing investigations, mounting political and diplomatic pressure behind the scenes could be slowing moves to bring charges against suspended staff members.

Some curial officials are privately concerned that, while clerical staffers might be expected to quietly take responsibility for misconduct, lay staff facing prosecution could start talking. If they do, some fear, they might make the scandals exponentially worse, and implicate more senior figures.

Details and allegations have steadily emerged over months about secretariat officials trying to disguise debts and assets on Vatican balance sheets and forging relationships with individuals and institutions connected to allegations of corruption, fraud, and money laundering. At the same time, investigators have carried out a series of raids on curial offices, resulting in several suspensions

One lay secretariat official, Fabrizio Tirabassi, was responsible for overseeing investments at the department. While the Secretariat of State invested hundreds of millions in a London building, Tirabassi was appointed a director of a Luxembourg holding company owned by the businessman brokering the property deal.

In any other jurisdiction, details like this might be expected to provoke swift and decisive action. Instead, the Holy See has offered only opaque updates, saying that “measures” have been taken against some “individuals,” but declined to say what the measures are, or to whom they have been applied.

In short, there may be no trials at the end of the Vatican’s investigation. And those observing from outside Rome are likely to wonder why.

One factor may well be politics, especially the kind steeped in the opaque traditions of the Holy See. Prosecutors could find themselves at odds with the secretariat over filing charges, or even publicly dismissing implicated employees, because of concerns about where a trial might lead.

“If you file charges, you have to go to court,” one source close to the Prefecture for the Economy told CNA. “If you go to court, you have to present evidence and assign blame. Once you do that, it could be every man for himself and who knows where the fingers will start pointing.”

One source suggested to CNA that senior clerics caught up in the investigation, like Msgr. Alberto Perlasca and Msgr. Mauro Carlino – both of whom served in senior positions in the Secretariat of State – could probably be relied upon to observe curial omerta about sensitive matters, and even to accept punishment.

But there is a sense among some in the curia that if lay officials, like Tirabassi, were facing conviction, future unemployability, or even prison, they might deploy a scorched-earth policy in their own defense. In curial culture, that risk alone could be enough to halt a prosecution. Or at least to tempt some officials to argue for a more quiet resolution to the whole affair.

“Everyone remembers what happened in 2016,” one Vatican source said, in reference to the so-called Vatileaks 2.0 trial which saw three curial officials, including a lay woman, indicted for passing confidential material to journalists.

“[Francesca] Chaouqui took the stand and all hell broke loose – sordid text messages, name calling, it was a circus. Can you imagine the same thing, but with someone who knows the details of billions of euros of confidential investments over years and could start pointing the finger at serving cardinals?”

While Cardinal Parolin, as Secretary of State, has already taken personal responsibility for some controversial projects at the department he leads, Tirabassi, Carlino, and Perlasca all spent years reporting directly to Cardinal Angelo Becciu who, from 2011-2018 served as sostituto of the secretariat.

The reluctance to provoke further public scandal or exposure may prove to be a determining factor in decisions about whether to press charges, and could go some way to explaining the continued reluctance of the Holy See to even acknowledge, let alone address recent revelations.

At the same time, a decision not to prosecute apparent financial misconduct could have serious potential diplomatic consequences.

Vatican efforts to combat money laundering and other financial crimes are under continued evaluation by Moneyval, the Council of Europe’s anti-money laundering watchdog, which is currently conducting a review ahead of issuing a report in December.

A favorable review from Moneyval is vital if the Vatican wants to be seen as a trustworthy member of the international financial community. A sufficiently damning report could lead to a return to international blacklists and, in extremis, the switching off of credit card machines in Vatican shops and museums.

A public financial crimes trial of senior Holy See officials of the Holy See’s most important government department could become an illustration of how badly some administrative issues are being handled behind the scenes.

Paradoxically, a trial might be the only thing that could satisfy Moneyval that the Vatican is taking real action.

At the time of its last report, in 2017, the watchdog noted the Vatican had yet to prosecute a single case of money laundering in court – it only prosecuted its first successful case in 2018.

The “overall effectiveness of the Holy See’s engagement with combating money laundering depends on the results that are achieved by the prosecution and the courts,” that report concluded.

Beyond diplomatic concerns there is the question of perception by the faithful.

Catholics have been calling for more transparency in ecclesiastical leadership, especially in the wake of the Theodore McCarrick revelations and other recent abuse scandals. A trial would be seen by some as evidence of movement towards that transparency. But those steeped in the old school will likely exert influence for a resolution that saves face, in deference to a long-standing disposition to avoid scandal. Tension between those camps will be real.

The Vatican may soon have to decide if it is willing to allow prosecutors to commit to a full legal process, wherever that may lead and whomever it may implicate. That choice could decide the conflict between self-preservation and real reform for the highest levels of the curia.