Analysis: How a papal handshake became an ‘extraordinary turning point’ for LGBT activists 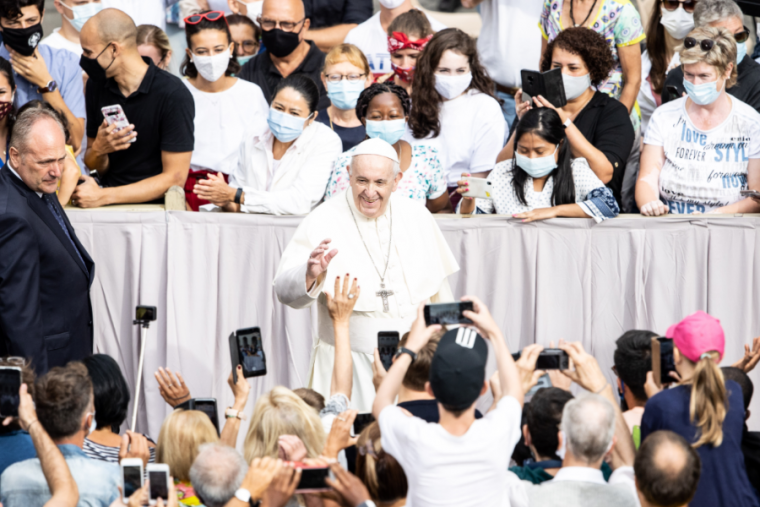 Analysis: How a papal handshake became an ‘extraordinary turning point’ for LGBT activists

L’Avvenire, the official newspaper of the Italian bishops’ conference, reported yesterday that Pope Francis “at the end of an audience” greeted a group of some 40 people, some of whom identify as LGBT, along with their parents.

Although none of the reported words from Pope Francis are new, or doctrinally problematic, they have not been confirmed by the Holy See.

But the episode drew media attention.

The Spanish blog “Religion Digital,” directed by laicized Catholic priest José Manuel Vidal offered its own version of the episode, quoting anonymously one of those who met the pope: “In the painful journey that each one of us have made as LGBT believers, I confess that I would not have imagined that we would have reached this stage; to meet in audience with the Holy Father.”

“These are the words of one of the representatives of the Italian association Tenda di Gionata (Jonathan’s Tent), of LGBT parents and children. About 40 of its members were received at the Vatican yesterday,” Religión Digital wrote, suggesting that the group had a formal, private meeting with the pope.

In fact, the group Tenda di Gionata was not received in a private audience, but met briefly by the pope during the massive greetings that follow his Wednesday general audiences.

During the minute-long encounter, Mara Grassi, vice president of the association, presented Pope Francis with a Spanish translation of the booklet “Genitori Fortunati” (“Fortunate Parents”), a collection of mostly negative experiences that parents of those identifying as LGBT have had with the Catholic church. The groups also presented the pope a rainbow-colored T-shirt with the words “In love there is no fear,” a quote from 1 John 4:18.

Most of the initial coverage about the reported words of Pope Francis to Tenda di Gionata came either from L’Avvenire or the Italian socialist newspaper La Reppublica, both of which interviewed Grassi, a mother of four children, one of whom, who is 40, identifies as gay.

La Repubblica’s report included remarks from Grassi that suggest the Church’s doctrine is arbitrary or unfair.

“After I came to know that my son was homosexual, I suffered a lot because the rules of the church made me think that he was excluded from the love of God,” she said.

TheL’Avvenire version of the meetingwas described by journalist Luciano Moia as a historic event.

Moia offered this description of the encounter: “In the Church of Pope Francis, who wants to tear down walls and build bridges of acceptance and understanding especially with the most fragile and marginalized people, this morning’s meeting appeared to many parents as an extraordinary turning point, confirming that what is written in some recent ecclesial documents, fromAmoris Laetitiato the Final Report of the Synod of Youth, can truly be translated into pastoral practice.”

Moia, the author of the book “Chiesa e Omosessualitá, Un’inchiesta alla luce del magistero di papa Francesco,” (Church and Homosexuality, an investigation under the light of Pope Francis’ Magisterium”), is longtime editor of a monthly insert in the official Catholic newspaper of the Italian bishops’ conference. He has been a proponent for the Catholic Church to change its doctrine on homosexuality as expressed by the Catechism of the Catholic Church, especially the concepts that “homosexual acts are intrinsically disordered,” and that theyare “contrary to the natural law, and therefore, that “under no circumstances can they be approved.”

The pope’s reported remarks on Wednesday were an expression of the Church’s most basic truth: That God loves all people, and that his love is not conditional. Neither those remarks, nor his brief conversation with Tenda di Gionata, suggest an endorsement of the group’s positions, a change in Catholic doctrine, or a “turning point” of some kind in the pope’s pastoral ministry. Reports to the contrary may indicate more about the