Angels and Ministers of Grace, Defend Us! 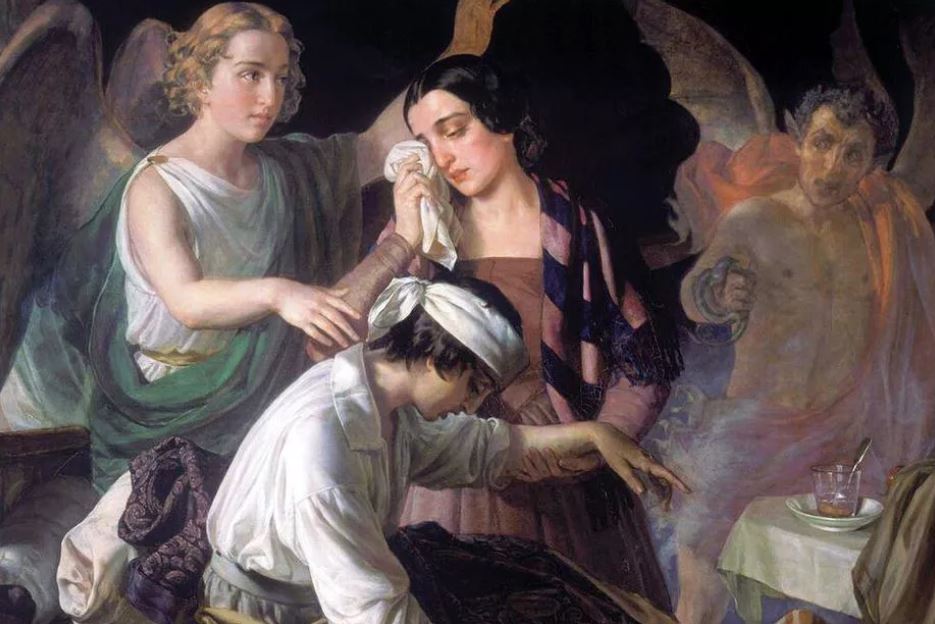 Angels and Ministers of Grace, Defend Us!

“Angel of God, my guardian dear, to whom God’s love commits me here, ever this day, be at my side, to light and guard, rule and guide. Amen.” —Prayer to Your Guardian Angel

In Italian, Spanish, Portuguese and Greek cultures, anonomasticois the celebration of the feast day of the saint after whom one was named and baptized. All Catholic and Orthodox European and South American countries and cultures will celebrate one’s personal feast in one way or another. But it’s not very common in the North America unless one grew up in a traditional family.

It had been a great deal more popular in the years prior to Vatican II, however, one can see a resurgence in the interest in celebratingonomastici(plural).

Angels are God’s servants and messengers. The word is derived from the Late Latinangelus(literally “messenger”) which, in turn, is derived from Late Greek???????(angelos) They are unseen but ever-vigilant companions in our pilgrimage on earth. Angels also accompany, attend and protect the Church in general. St. Teresa of Ávila assures us that the church’s sanctuary is positively resplendent with angels during Mass.

The Catechism of the Catholic Church teaches that “from infancy to death, human life is surrounded by their [angels’] watchful care and intercession. Beside each believer stands an angel as protector and shepherd leading him to life. Already here on earth the Christian life shares by faith in the blessed company of angels and men united in God.” (CCC 336)

In hisSumma, St. Thomas Aquinas wrote that all human beings –– Christian or not –– have guardian angels, however, believers especially benefit from their presence in their lives. In a sense, the sacrament of Baptism “activates” the angel as a minister of grace.

In the Parable of the Lost Sheep, Jesus reminds us of the wonderful gift he gave us upon our creation: “See that you don’t despise any of these little ones. Their angels in heaven, I tell you, are always in the presence of my Father in heaven” (Matthew 18:10). The Catechism of the Catholic Church (328) states that “the existence of the spiritual, non-corporeal beings that Sacred Scripture usually calls ‘angels’ is a truth of faith.” From our birth until our death, man is surrounded by the protection and intercession of angels, particularly our guardian angel: “Beside each believer stands an angel as protector and shepherd leading him to life.” (336)

What Catholic mother or father knows, as a tenet of faith, that they can rely upon the angels to protect their child? It’s comforting to know that your child has a built-in babysitter, watchdog and 24/7 security guard watching over their most precious treasures. Christian parents can halve their worries by sharing their duties with the Guardian Watchers (Isaiah 62:6).

But it’s not just parents who rely upon guardian angels. After we leave our mothers’ sides, our guardian angels are our guarantee of God’s love and presence in our lives. Our angel helpers’ main role is to represent individuals before God, to watch over them always, keep them from harm (physical and spiritual), to aid in their prayer and to present their souls to God upon their charge’s death. They guard, guide, protect, nurture, enlighten and direct us toward God.

Sts. Francis of Assisi, Benedict of Nursia, Bernard of Clairvaux, Josemaría Escrivá, Padre Pio, John XXIII, Teresa of Ávila and Thérèse of Lisieux were all very dedicated to the angels, especially their guardian angels.

Christians have honored guardian angels as early as the fourth century. The modern feast dates back to the 11th century but the concept of guardian angels is found in ancient Judaism. St. Ambrose, in hisSermons on the Psalms, points out, “Air and earth and ocean, everything is full of angels.” God is definitelythePrime Mover but his angels are the secondary movers who put God’s plans to work. Ambrose found evidence of this in Scriptures: “When the waters saw you, O God, they were afraid, and the depths of the sea trembled” (Psalms 76:16).

This is not to say that mere matter is sentient but rather the angels responsible for that material creation trembles in God’s presence because of his great love for all creation.

Raphael played an important role in Tobit and Tobias’ witnesses to the Faith (Tobit 12). Michael will play an important part in the Apocalypse when the time arrives. Angels were also the witnesses and heralds of Jesus’ Resurrection. Michael leads hosts of angel warriors to combat Lucifer and his forces (Daniel 12:1, Revelation 12:7-9). He has always been called upon as a stalwart protector against evil in all of its forms.

Though we can’t normally observe angels, they encourage us in trying times. They remind us of God’s presence and importance in our life. They assist us in our own personal struggles and in our contemplation of God. In a myriad of unseen ways, the angels help us on our earthly pilgrimage by assisting us in work and study. They help us evade and conquer temptation and they protect us from physical danger. St. Ambrose pointed out that when Elisha was besieged by his enemies’ army, the Patriarch was fearless because he felt a host of angels standing shoulder-to-shoulder around him (2 Kings 6:16).

Devotion to our guardian angels is an outward expression of our love for God and his love and providential care for us. He loves us so much that he wants angels to guide and guard us (Psalm 91:12).

Remember always to honor your guardian angels, and if you want to get on your kid’s angels’ good side, urge your kids to honor them as well. Consider using the prayer listed above once or twice a day.

Further, what better way to celebrate and honor them than to share a special meal on their feast day? What would angels like to eat? Angel hair pasta and angel food cake, of course! Every third-grader knows that!

Heat oven to 450°F.
Slice eggplants lengthwise and cut into 1-inch cubes and add them to a large mixing bowl.
Toss the eggplant with olive oil, thyme, oregano and garlic powder. Salt and pepper to taste. Spread the mixture across a baking sheet and bake for 20 to 30 minutes until golden brown.
Heat a heavy-bottomed frying pan and add olive oil and sliced garlic on low heat. Once the garlic is light brown in color, add the tomato sauce and vinegar and the red wine. Reduce heat to medium-low, and simmer for 20-30-minutes stirring occasionally.
As the sauce is cooking, fill a deep pot with water and boils. Angel hair pasta cooks faster than most other pasta shapes so follow the instructions on the package. Before you drain the pasta, reserve 1 cup of pasta water and set it aside.
Combine the eggplant and the pasta sauce and simmer for 10-15 minutes.
In a large serving bowl combine the pasta and the eggplant sauce and mix well. If a bit of the reserved pasta water is necessary to thin the mixture, use it now.
Dress the pasta with the grated cheese, chopped basil, and add salt and pepper to taste. Drizzle a bit of olive oil on the pasta and serve.
If you’ve chosen to use prosciutto, chicken, kielbasaor bacon,you may add them now and mix well.

½ teaspoon salt
1¼ cups all-purpose flour
1¾ cups egg whites (Keep them on the counter for an hour before using them. They should be at room temperature.)
1¾ cups granulated sugar
2 teaspoons cream of tartar
2 teaspoons vanilla extract

Preheat oven to 375°F
Mix flour and ¾ cup sugar until well combined. Set aside.
In a bowl, beat eggs and add the cream of tartar, vanilla and salt. Beat gently until soft peaks form.
Slowly add the remaining sugar, continue to beat until the batter forms stiff peaks again.
Gently fold in flour mixture. Don’t rush the mixing or the cake will not be as light and fluffy as it can be. It’s better to err on the side of not mixing well rather than mixing too well.
Gently ladle the batter into two 9-inch round cake pans. (An angel-shaped pan would beheavenly!)
Bake for 30 to 35 minutes (or until the cake springs back when lightly touched)
Remove the pans from the oven and invert them to cook.
Fold the cream cheese, yogurt and sugar in a separate mixing bowl until smooth.
Once the cake is cool, assemble and apply the frosting.
Serve the cake to your little angels and bask in the familial love.