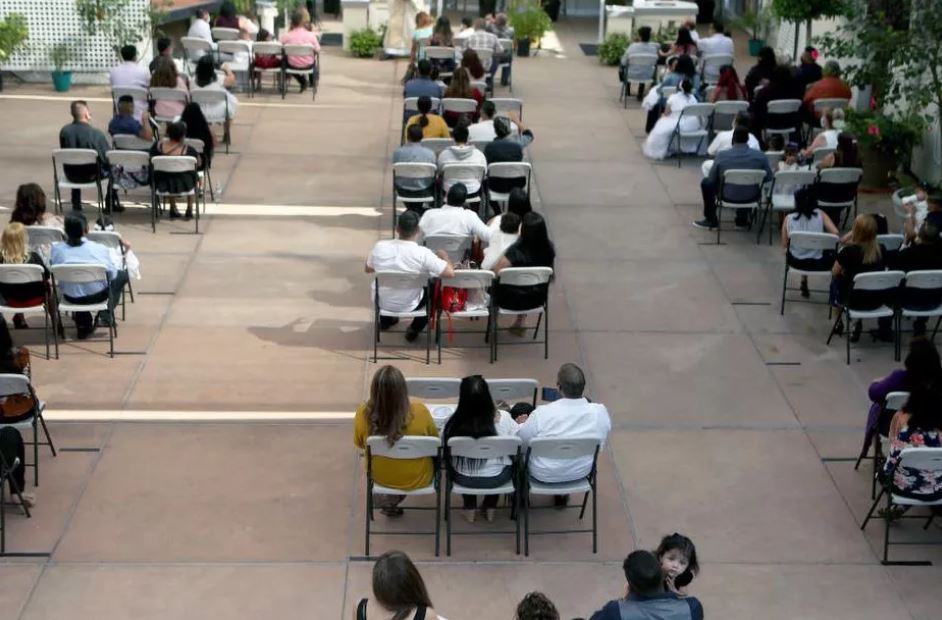 Some people seem to be holding out the fear that they are “protecting” society against illness to advance their view of religion as just another “special interest.”

Faithful readers of these essays know that I frequently analyze editorial content fromThe New York Times.I do that because, whatever one might think of that paper’s editorial leanings, it has historically shaped the opinions of America’s elites, and so it behooves Catholics to know how that thinking is being formed to our weal or woe. I also find it useful to survey the comments that follow up opinion pieces, because they usually spell out implications the original writer was too polite to admit or directions where that opinion will likely shift in the future.

Linda Greenhouse, who opines on the Supreme Court for theTimes,deserves particular attention. The title of her July 30 piece,“The Supreme Court’s Religious Crusaders Take on the Pandemic Response,”already lets the cat out of the bag as to her intended spin.

InCalvary Chapel Dayton Valley v. Sisolak et al.,[opinionshere,here, andhere], a Protestant church in Nevada asked the federal courts for an injunction against that state’s governor’s COVID-19 regulations that put a 50-person-in-attendance cap upon churches, while imposing no such rule on casinos and gaming halls. The Supreme Court split 5-4 against Calvary Chapel. The majority was made up of the Court’s so-called “liberal wing” (Justices Breyer, Kagan, Ginsburg and Sotomayor) coupled with Chief Justice Roberts. The so-called “conservative wing” (Justices Alito, Gorsuch, Kavanaugh and Thomas) would have granted the temporary injunction, with Justices Alito, Gorsuch and Kavanaugh filing explicit dissenting opinions (which clearly irritated Ms. Greenhouse).

Branding the dissenting justices “religious crusaders,” Greenhouse claimed that they were “seeking to elevate religious interests over those of secular society” by attempting to “turn a public health issue into a religious crusade.” They pressed their crusade in an opinion marked by “ferocity” supposedly oblivious to “the facts on the ground, particularly the well-documented role of religious services in spreading the virus.”

Professing puzzlement at the “mystery” why Calvary Chapel could not halve its attendance (especially when Greenhouse does not take seriously its desire not to continue worship in on-line mode) or add services, she impugned the motives of the Alliance Defending Freedom (which represented the Chapel) for seeing an “opening” in that “casinos are treated more generously than … churches.” (She throws a bone to churches, saying they – unlike theaters, for example – were given a concession by Governor Sisolak to have outdoor services).

She is amazed the case even reached the Supreme Court, because the Court threw out a challenge to onerous California regulations against churches two months ago, inSouth Bay United Pentecostal Church v. Newsom[seehereandhere, clearly signaling that this case represented another attempt by conservatives to undermine the sacred ofstare decisis,precedent. She attacks Justice Alito for trying to protect Calvary Chapel on free speech as well as free exercise grounds but, in the end, insists it’s all important because the “rhetoric” of the dissenters wants to put the Court into the middle of someplace it doesn’t belong: making public policy on health issues.

Chief Justice Roberts recognizes that and saved the Court from going “where it is least qualified to be, at the center of a national debate” over “public health” in a pandemic. She closes with a swipe at her fellow liberals, “fascinated” that “some liberal commentators found the dissenting opinions persuasive and the case a close one.” Not Greenhouse: “generosity towards the religious claim here loses sight of the broader context ….”

As Justice Alito “ferociously” observes: “The Constitution guarantees the free exercise of religion. It says nothing about the freedom to play craps or blackjack, to feed tokens into a slot machine, or to engage in any other game of chance. But the Governor of Nevada apparently has different priorities.”

The Bill of Rights enumerates the basic liberties of all Americans. As the late Richard Neuhaus indefatigably pointed out, thefirstright listed in theFirstAmendment of that Bill of Rights deals withreligion.Not freedom of speech nor freedom to protest nor even freedom to bear arms. Thefirstright the Constitution bothers with is freedom of religion. It is not a specialinterestbut aright. There is, as Justice Alito simply observes, an explicit Constitutional right to religious freedom.

Asserting that Calvary Chapel’s right to free exercise of religion is not some special pleading, as Greenhouse implicitly suggests. It is simply defending what the Constitution says to be its right. She seems to think that religious institutions are just another special interest alongside a plethora of others, jockeying for special treatment (as, presumably would those others). Governor Sisolak has done the hard work of adjudicating among those special interests and, apparently, churches lost. So be a good public citizen and sit down. That’s clear in Greenhouse’s conclusion that churches were treated equally to other indoor institutions, whereas as she admits the only privileged ones were casinos. This same attitude is borne out among commentators who, assuming the public square should be thoroughly secular, find repugnant the attitude of those seeking what they perceive as a special carve-out for the superstition of religion.

Two observations to Greenhouse’s view: fake “science” and the perdurance of rights.

Furthermore, have we reached the point where common sense no longer has a claim over the ability of some researcher to quantify data (remembering Mark Twain’s famous dictum about “lies, damn lies, and statistics”) in “confirmation” of just about whatever you want to “prove?” On the basis of this cursory data (which Greenhouse would almost certainly not admit if it were to infringe on “abortion access” during COVID-19) are we going to allow county executives to tell us whether or how Communion may be administered, state governors to engage in hymn choices, orTimeseditorial writers to tell churches to be satisfied with on-line worship? We must demand clear and indisputable proven data — not just suggestions — before we concede any abridgement of religious freedom because there is very much an attitude abroad that religious venues are particularly dangerous to the public health, an attitude one might with a hermeneutic of suspicion suggest is as much a function of a rabidly secular worldview as it is of “science.” Is it really plausible that COVID-19 is more aggressively spread by Christians socially distanced in a church singing “Lady of Knock” than by gamblers cheek-to-jowl at slot machines yelling “C’mon, c’mon 25! Yeh! C’mon, Lady Luck!”

Have we reached the point where elite opinion now holds that “public health” allows the state to use its police power to enact any generally applicable norm, without taking account of Constitutional rights, as long as it is not explicitly targeted at religion in a bald-faced way? Does the claimed threat of infection — however preliminary or tenuous — justify deferring to public policies that violate those rights? Has the Catholic Church in the United States abetted that abridgement of religious freedom by (a) its being conspicuously AWOL in pushback on aggressive state control (except for the bishops of Minnesota back in May) and (b) its fostering the thinking that, in the threat of potential mortality, all ecclesiastical activity, including Mass and the sacraments, can be suspended?

Second, rights perdure. Rights do not go away in emergencies. Greenhouse would certainly not deny that, considering (a)she has attackedKorematsu v. United States,the 1944 Supreme Court decision upholding internment of Japanese-Americans as part of the national emergency called World War II; and (b) one would expect Greenhouse to align with all those who challenged COVID-19 bans on elective surgery when they included abortion. The Bill of Rights does not have a “these rights don’t apply in a national emergency” clause. Greenhouse certainly advocated that position when it came to expanding “rights” for Guantanamo detainees accused of terrorism, but she would deny them to her fellow Americans who — as Barack Obama put it, “cling to … religion.”

To wrap up, two more observations. Abortion is always on Greenhouse’s mind, even if she doesn’t admit it. In arguing that this case should have never even made it to the Supreme Court because the Court addressed this issue in May, we see the specter ofstare decisisin the background: the Court must hew to “precedent” or lose its “institutional credibility” (at least in the eyes of Greenhouseet al.), a threat essentially lobbed at the Chief Justice. If we breach that wall here,Roeis threatened! Never mind that the defense of explicitly articulated Constitutional rights like free exercise of religion should never be out of season.

No, Greenhouse wants to drive all free exercise of religion claims against COVID-19 rules under the “facts on the ground” rule to be determined by public authorities, not judges. (One clearly sees her allusion to Chief Justice Roberts’ justification, inNewsom,for refusing an injunction because of the “changing facts on the ground”). She would give those public authorities practically limitless indulgence in shaping public policy on COVID-19 and how it might affect religion (as long as some fig leaf “facts” could be adduced to justify the claim). One suspects the elites are betting they can get away with this by holding out the fear that they are “protecting” society against mortality, a fear allowing them to advance their view of religion as just another “special interest.”

As I read this article, I could not help but compare how Greenhouse’s argument is antithetical to her position inJune Medical.No state regulation of abortion-on-demand ever gets aprima faciepass from her hermeneutic of suspicion. No abridgement of the abortionÜber-Rechtis ever so slight not merit recourse to a federal judge to drive out the camel’s nose from beneath the tent of choice. No public authority would ever be given the deference to “protecting life” she gives to COVID-19 rules (even though limits on abortion actuallydoprotect lives). No, this argument is as much ideology as “fact” driven. What is at issue is how Greenhouseet al.want to write the public narrative. Those who believe in a real right of free exercise of religion need to stop her.

Be faithful to Christ, Pope Franci...