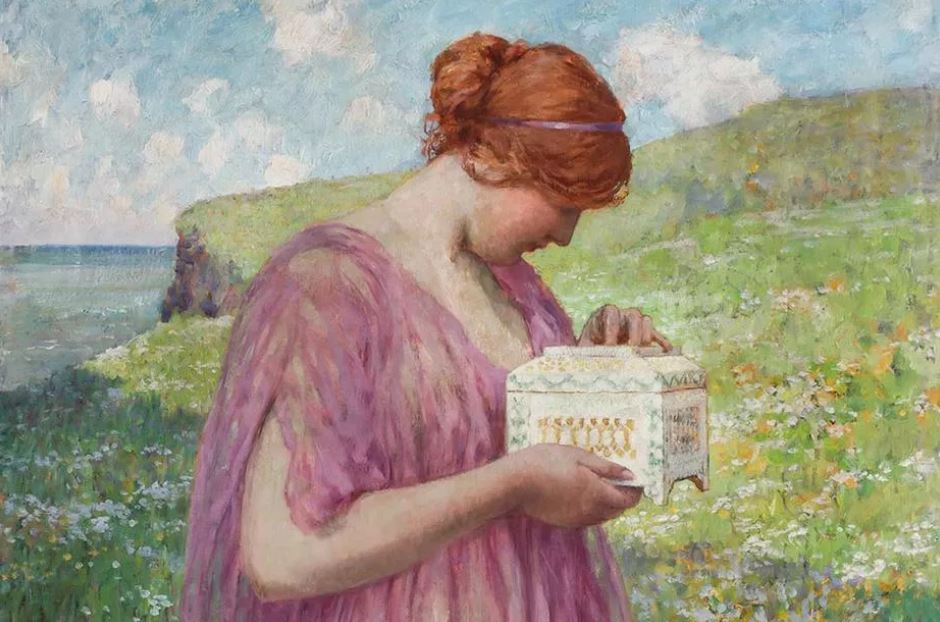 The prophetic Sheen again sounds as he were looking at today’s society, finding hope in an unusual example amid violence and runaway science

It was the mid-1960s but it might as well be today. Bishop Fulton Sheen was explaining to his TV audience the three sources of the despair and nihilism in the world — which have only multiplied — and the one solution that definitely eradicates it because he was talking about “hope for a wounded world.”

But through the next five decades, people listened less and less to what he had to say, for the most part ignoring his insights and guidance as they did the prophet Jeremiah’s.

Let’s listen to Sheen’s perceptive revelations in the midst of today’s constant blaring headlines and skewed news reports to see the perennial problem yet still have strong reason to hope.

“There seems to be so much despair in the world,” Sheen began. Then right away he gave an image that despair does not have the final word. He pulled out the legend of Pandora’s box.

“Pandora opened the box and death, disease, destruction, economic chaos, leprosy, fears — all came out. And she barely slammed the lid on the box. Otherwise, hope would have got out. Hope was the only thing that was left in the box to indicate that there’s some hope even amidst all the evils of the world.”

Because he was “going to show therealbasis of hope,” he wanted to start with the three wounds and origins of modern despair. Not only aren’t they healed yet because people ignore the salve, but they’re stronger than they were 55 years ago. A look around the world confirms it.

First,“God is dead. In other words, we have nothing left in this world except the world itself. If there’s any hope, it’s technology and science.” Read that again. He saw it then and growing more even though there were no personal computers, iPhones, smart this-and-that’s. And just look at the coronavirus. Limit church attendance. Look mainly to science to save us. How about the politicians who insist science has the answer to save us? How about the constant barrage of commercials for tons of medications?

Sheen saw it coming: “Maybe if we just give enough time, technology may be able to take care of all of our diseases,” he said ironically, echoing the standard chorus. “There’ll be no more poverty. But there’s no such thing as guilt. Or sin. We have only to deal with social issues. This is one of the despairing pictures of the modern world.” Programs and more programs, money and more money, will fuel the technology and science to make it happen, of course.

Second,“the second is violence which disturbs us all.” Sheen said of all the different facets of violence, he was “just going to choose one phase of violence, and that will be modern wars. And what is terrible about modern wars is that they involve less and less the soldiers who fight. They touch more and more the civilians.”

“We could go on,” he said, “to robberies, muggings, murders, and so forth, but this shows that civilians and non-combatants are less and less immune from violence and destruction.”

Third,“a third basis of… despair in our modern world, is what might be called the despair that comes from the secular city. The anxiety of modern man in contemporary civilization. His fears. His dreads. His neurosis, his psychosis. His loneliness. He’s a wanderer on the earth.” Look at just one piece of this — the growing anxiety in the last few weeks of people locked in, unable to work for the most part, life turned topsy-turvy.

“You add up these three — the world in which science is the only hope and there is no guilt; violence; and secularism — you have the despair in which we’re all involved,” the bishop said. He was showing a snapshot of much of today’s world.

For more insight, Sheen turned to three myths in history that “typify these three” wounds and origins of the despair. Why? “Under the guise of a story, or a legend, or a novel that depicts the mind of history there is hidden a great truth.”

Next Sheen explained the myth of Prometheus who stole fire from heaven, took it to earth and “brought with it violence. And destructiveness. Not warmth. And not love.”

Then the third myth of Circe and her magic wand which if touched, would turn anyone into a pig. Sheen explained, “In other words, evil is lonely when it’s left by itself. It has to have company. It’s got to form a city, a corporation, a group.

“Circe was the basis of all evil communications whatever they’d be — press, radio, television, pornography. Anything. That which is wicked and base wants to make everyone else base, otherwise it’s not content and happy.”

As Ecclesiastes said long ago, “there’s nothing new” under the sun.

But Sheen added another example and focused on it in depth — straight from the Bible and with names recognizable to all. It was a semi-surprise. It was about Cain — “Andthat’sthe beginning of all of these legends and the despair of the contemporary civilization.”

How does he fit?

“First,” Sheen explained as he made the connections to the three sources of despair, “Cain was the one who said practically, ‘God is dead.’ Why? He refused to acknowledge guilt. ‘No guilt,’ he said. ‘No judge.’ And that was one of the reasons why Cain would offer no bloody sacrifice. He offered nature. He offered technology… He would not admit that he was responsible to anyone else! There was foulness on his soul that had to be washed away.” For him, “It was only the manipulation of things. That was all. That’s the reason the sacrifice was not pleasing.”

Sheen then made the connection of Cain to the second cause — violence. “He was a man with a club. Just as soon as God is dead, neighbor’s dead. It follows.”

How much clearer could Sheen get about society that kept escalating these problems — that healready sawat an earlier time.

Then Sheen put the spotlight on the rest of the story. After Cain killed his brother, he turned to being a wanderer. “He was frightened, and afraid. When God said to him, ‘Where’s your brother Abel?’ he said, Wherever I go men will kill me. He was afraid of vengeance… Interesting, isn’t it? What he dreaded was some kind of wrath that might be upon him.”

The Sheen asked the rhetorical question — why all this talk about despair in a talk about hope?

He answered — “Because we don’t want hope to be just a kind of an optimism” not admitting “the great realities of life. We’re going to take the worst, when evil is most potent, and show how there’s hope. And who will show us? Cain.”

He said to God that wherever he went men would look to kill him. “Anxiety. restlessness in the secular city. He went off to the Land of Nod… He became restless, like modern man. When he said to God, ‘I’m afraid,’ … God said, ‘I will set a mark upon you, that no one may take vengeance upon you.’” The mark “might have been the blood that was on his hands, Abel’s blood that he couldn’t wash off… he was given a sign… the sign was not vengeance. It was to protect him from vengeance. God was giving him a sign like that rainbow in the sky after the flood, a covenant of mercy. “In other words, ‘Cain you’ll not be revenged. Vengeance belongs to me, not to men.’ So…what God did was surround him with compassion, with mercy. and that mark was the sign, you’re God’s property. You don’t belong to men so that they can kill you, you’re mine.”

Then the saintly Sheen revealed the hope that still exists even in such a situation — and by extension, our society’s and our world’s situation. He explained, “There was another Cain — a race of Cains — you and I — and we slew another Abel, the just Abel. And he said, ‘Father, forgive them, for they know not what they do.’ Rumors began to fly about that he was seen in several places. That he actually was not dead. That he was alive and he’s seen walking on the wings of the morning.”

Here’s where our only hope to straighten out this mess continues. “If… that Abel is alive, then is not the hope of all of the modern Cains in this mark (Sheen pointed to his forehead) that was put upon him by a merciful God, is not their salvation, and the fact that they too are saved by the just Abel?

“In other words, one of the great hopes of the world is we’re just not optimists, we’re in a certain sense kind of pessimists. We start with the worst. We saw evil in its strongest moment defeated. We saw ourselves loved when we were most unlovable, when we slew innocence. And so we’ve come forth from under the modern Able ever conscious of the fact that we live by what we slay.”

Sheen left us to decide if we, as individuals and a society on the brink, will continue sliding down that three-part slope or instead grasp and hold on to that hope to change our direction and get on “Abel’s” side.