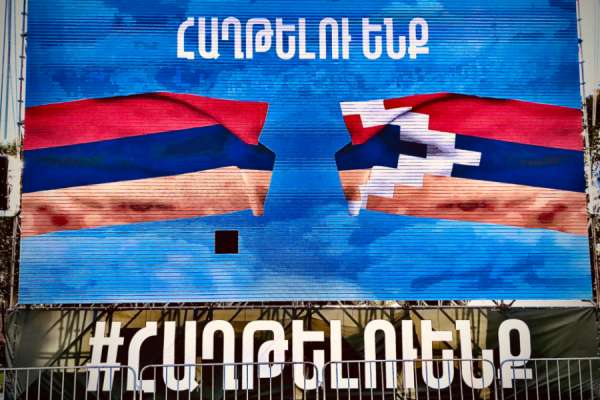 Rome, Italy, Nov 12, 2020 / 08:30 am (CNA).- The Armenian ambassador to the Holy See said Wednesday that the recruitment and deployment of Syrian Islamist extremists to the Nagorno-Karabakh conflict zone in the Caucasus Mountains is a serious threat to international security.

Ambassador Garen Nazarian of Armenia said at a virtual event Nov. 11: “For the past two months we have repeatedly voiced out about the recruitment of terrorists and jihadists by Turkey from various hot spots in the Middle East, particularly from Libya and areas under control in Syria, and their subsequent transfer, deployment, in our region with the purpose of committing atrocities against the Christian population of Artsakh.”

“The transfer of terrorists to the Nagorno-Karabakh conflict zone reveals the intentions of Turkey and Azerbaijan leadership to give the conflict an interreligious character, and this is truly very dangerous,” the ambassador to the Vatican said.

Turkey and Azerbaijan have both denied reports that they recruited militants from Syria to fight in Nagorno-Karabakh.

Artsakh is the ancient historical name of the Nagorno-Karabakh territory. The area is recognized by the United Nations as belonging to Azerbaijan, a predominately Muslim country, but is administered by ethnic Armenians, who mostly belong to the Armenian Apostolic Church, one of six autocephalous churches of the Oriental Orthodox communion.

Armenia prides itself on having been the first nation to adopt Christianity as a state religion, which it did in the year 301. The disputed territory has had an Armenian identity for millennia and with that a rich Christian history.

The largely Muslim composition of Azerbaijan and the history of Armenian Christianity is a factor in the conflict. The dispute over the territory has been ongoing since the collapse of the Soviet Union, with a war fought over the region in 1988-1994.

The Armenian ambassador spoke at a virtual event — “Terrorism against Christians in Europe: How to face the new challenge?” — organized by the ecumenical #StandTogether initiative, which seeks to give a voice to persecuted Christians.

Sally Axworthy, U.K Ambassador to the Holy See, provided the opening remarks, and Bishop Matthieu Rougé of Nanterre spoke about the French Catholic response to the recent terrorist attack on the Basilica of Notre-Dame in Nice.

Ambassador Nazarian, in his remarks, called for the international community to “undertake consistent steps in the fight against terrorism in Europe.”

“Today the presence of terrorists in our immediate neighborhood is not merely confirmed by the intelligence services of France, Germany, Russia, United States, a number of our partners in Europe, but also by the direct testimonies of terrorists themselves,” he said.

“Recently in their testimonies, the captured terrorists from Nagorno-Karabakh conflict zone provided detailed information about their recruitment process, expected monthly payment, for fighting against so-called kafirs — and this is the Arabic word for infidels — the extra payment for each per head of Christian Armenians, as well as their terrorist plans.”

Armenia’s Prime Minister Nikol Pashinyan called for an investigation into the presence of foreign fighters in the Nagorno-Karabakh conflict zone on Nov. 1 after Armenian forces captured two Syrian fighters. Official Armenian media published videos of captured Syrian mercenaries, saying that they were offered additional money per head for every Armenian killed.

Foreign Policy magazine has reported that an estimated 1,500 Syrian mercenaries affiliated with the Turkish-backed Free Syrian Army, also known as the Syrian National Army, had been deployed to the Nagorno-Karabakh region as of Oct. 5. The Syrian Observatory for Human Rights said Nov. 3 that the number of Turkish-backed Syrian fighters in the conflict zone had reached 2,350.

A United Nations report in September documented that the Syrian National Army had carried out war crimes, including kidnappings, rape, and extortion of Kurds, Christians, and other minorities during the fighting in Syria.

“This is a completely new manifestation of expansion of terrorism when foreign terrorist fighters and jihadists from the Middle East have been deployed to a conflict zone in Europe, in Europe’s Eastern Partnership area, and it is a serious threat for the international security and civility,” Nazarian said.

“This process entails a continued cooperation on multilateral, bilateral levels as the members of civil society, who have been very active and who have made a significant contribution toward the fight against terrorism, in order to effectively face the challenge before the Christians in Europe and other regions.”

Meanwhile, an ecumenical group of advocates for persecuted Christians have published a letter calling on the U.S. to condemn Turkey and Azerbaijan over the conflict, which has led to the deaths of more than a thousand Armenians in recent months.

“Turkey and Azerbaijan, with a combined population of 100 million, are working with terrorist mercenaries to target Armenia, population 3 million … in a continuation of a century-long attempt to destroy a blockaded, landlocked, and partitioned state filled with descendants of genocide survivors,” said the letter, written by Philos Project president Robert Nicholson.

The signatories urged the U.S. to suspend all arms sales to Turkey and Azerbaijan until the conflict ceases. They also asked the U.S. to send aid to Armenia and to initiate diplomatic efforts to resolve the region’s disputed status.

Nazarian also pointed to the acts of vandalism that have taken place against Armenia’s diplomatic missions in Europe, most recently against the Consulate General of Armenia in the city of Lyon, France, where vandals spraypainted  “1915 RTE” on the building.

“‘1915 RTE’ is more than vocal as it contains a threat of recurrence of the Armenian genocide and the glorification of current Turkish President Recep Tayyip Erdogan, RTE,” he explained.

In the Armenian genocide of 1894-1924, the Ottoman Empire killed an estimated 1.5 million Armenians.

“The world ignored Turkey’s genocide of Armenians and other Christians a century ago. It would be a tragic mistake to ignore it again,” Nicholson said.

More than 1,300 soldiers have died on the Armenian side of the conflict alone since September 27, when Azerbaijan launched an offensive to retake the territory of Nagorno-Karabakh, the New York Times reported.

Turkey is supporting Azerbaijan in what humanitarian and Christian aid organizations say is a campaign of violence against Armenian Christians in the territory. Turkey’s military exports to Azerbaijan — including drones, ammunition, and other weapons — have risen sixfold this year, Reuters reported last month.

Armenia and Azerbaijan announced early Nov. 10 the latest ceasefire agreement, brokered by Russia. The agreement has proven unpopular in Armenia, with thousands gathering in the capital Yerevan to protest. The ceasefire calls for territorial concessions in and around Nagorno-Karabakh no later than Dec. 1 and the deployment of nearly 2,000 Russian peacekeepers, the Associated Press reported.

Pope Francis met privately with the Armenian Catholic Archparch of Istanbul, Archbishop Boghos Lévon Zékiyan, at the Vatican on Nov. 12.

The pope has repeatedly appealed for peace in the Caucasus region, most recently in his Angelus address on Nov. 1.

“Let us not forget  what is happening in Nagorno-Karabakh, where armed clashes are interrupted intermittently by fragile truces,” Pope Francis said.

“I would like to renew my heartfelt appeal to the parties responsible in the conflict so that they intervene as soon as possible to stop the shedding of innocent blood,” he said.