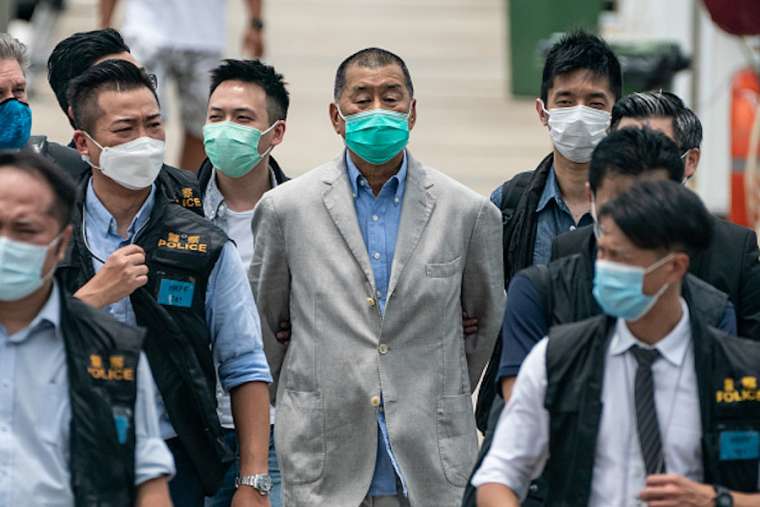 The godfather of an arrested Hong Kong Catholicentrepreneur and pro-democracy advocate says he hopes Jimmy Lai’s courageous example will inspire more calls for justice amid an ongoing crackdown on human rights in Hong Kong.

“[Jimmy’s] faith isn’t based on the idea that he won’t suffer, or there’ll be a happy solution,” said Bill McGurn, a longtime member of the Wall Street Journal editorial board, during an Aug. 18 interview with CNA.

“He’s moved from billionaire to dissident and he’s shown he’s willing to pay the price. It’s the most moving thing I’ve ever seen in my life. It’s just extraordinary to me.”

A band of nearly 200 police officers arrested Jimmy Lai on Aug. 10, along with at least nine others connected with theApple Daily newspaper, as part of an apparent crackdown on civil liberties in the island territory. They also raided the newspapers’ offices.

Those arrested are expected to be charged with colluding with foreign forces. Apple Daily, the newspaper that Lai founded in 1995 has distinguished itself over the years as a publication critical of the Chinese government in Beijing, and strongly pro-democracy.

On July 1, a controversial National Security Law went into effect in Hong Kong, having been imposed on the territory by Beijing, bypassing the Hong Kong legislature.

Under the new law, a person who is convicted of secession, subversion, terrorism or collusion with foreign forces will receive a minimum of 10 years in prison, with the possibility of a life sentence.

Lai, a Catholic, is currently out on bail. McGurn said he thinks it is very likely that Lai will ultimately go to prison, and he thinks China will want to make an example of Lai— a prominent figure being marched out in handcuffs— in order to frighten people into compliance.

Despite this, McGurn said Lai’s arrest may very well have the opposite effect— it may galvanize ordinary pro-democracy Hong Kongers, Catholic or otherwise, to remain courageous as Lai did in the face of his captors.

McGurn pointed out that Lai, 71, could easily have fled the country and saved himself, but he chose to stay and face the consequences of his actions.

“Here’s a millionaire, a billionaire, who doesn’t have to be there. He could have run away and saved himself. He chose those handcuffs. That’s my point. He chose the handcuffs, the way Christ accepted the cross,” McGurn said.

McGurnpenned an op-ed in the Wall Street Journalon Monday, in which he called Lai’s journalism “Hong Kong’s single most important counter to official propaganda” and compared his godson to St. Thomas More, who famously stuck to his principles in spite of tyrannical pressure from Henry VIII.

“In any just society, Jimmy Lai would not be threatened. But Hong Kong is no longer such a society,” McGurn wrote.

“In its place we are left with the powerful witness of a good man willing to give up everything except his principles, even if it means trading in the life of a billionaire for the prison cell of a Chinese dissident.”

Lai had come to Hong Kong at age 12 as a stowaway, penniless, from mainland China. McGurn said Lai saw a need for affordable, quality clothing for middle-class people, and thus founded a chain of clothing stores called Giordano’s— a venture which would make him rich.

McGurn’s work as a journalist for the Wall Street Journal brought him to Hong Kong for several years. When McGurn first met Lai in the 1980s, he said their families immediately bonded. Over the years, the McGurns and the Lais would become godparents to several of each others’ children. Lai’s wife, Teresa, came from a well-known Chinese Catholic family.

“He had always been kind of surrounded by Catholics. He liked them. He was comfortable with them,” McGurn said.

McGurn said the first time he invited Lai to convert to the faith in 1997, Lai refused. McGurn was disappointed, but did not press the issue.

“And then three weeks later, he took me aside and he said he wanted to have Christ in his life,” McGurn said. Lai asked him to be his godfather.

McGurn said that period in 1997, right before the handover of Hong Kong from Britain to China, was a gloomy period, both in mood and weather-wise. But when Cardinal Joseph Zen of Hong Kong baptised Lai at the cathedral, “it really was a shaft of light breaking through the gloom.”

McGurn stressed that Lai’s conversion did not “teach” him his pro-democracy values— he had been an advocate for freedom and democracy for some time already— but his conversion brought him “into communion” with his wife, and with his many Catholic friends.

McGurn said he also believes that Lai’s Catholic faith is bringing him peace and comfort during his present ordeal.

“He’s just accepted his destiny and I think he’s accepted it in a Christian way. And in their family, they’re talking about it in terms of love and repentance and love and forgiveness…he’s a man who’s facing this upheaval and is remarkably at peace with himself,” McGurn said .

“And maybe he would have been that if he hadn’t become a Catholic, but I have to believe it gives him some strength because he talks about it. He talks about the peace that comes from knowing you’re doing the right thing.”

In addition to McGurn, Lai counts among his friends Cardinal Joseph Zen, the archbishop emeritus of Hong Kong who has been a tireless voice against the Beijing government and in favor of religious freedom.

McGurn urged prayers for Lai and for all those arrested, and encouraged people not to forget Lai and the work he has done.

“The worst thing about prison in a Communist society is that you disappear and you’re just forgotten…keep people’s names out there, say you’re not forgotten, and pressure the government to say we’re not tolerating this. There’s very little we can do to free them directly. But with enough pressure, I think China may decide it’s not worth it,” he said.

Hong Kong is a “special administrative region” of China, meaning it has its own government but remains under Chinese control. It was a British colony until 1997, when it was returned to China under a “one country, two systems” principle, which allowed for its own legislature and economic system.

Hong Kong’s openness to the outside world, and transparency in business and banking regulation, in contrast to mainland China, has made it a center of global business, banking, and finance.

Pro-democracy protests in Hong Kong— in which many Christians and Catholics participated— successfully rebuffed the legislature’s efforts last year to pass a controversial bill that would have allowed mainland China to extradite alleged criminals from Hong Kong.

With the passage of the new security laws, the Communist Chinese government seized more power to suppress the protests in Hong Kong, which it sees as a direct challenge to its power.

Similar security rules have been proposed before; in 2003, the Communist government attempted to use Hong Kong’s own legislative and executive councils to pass the anti-sedition measures, but massive protests led lawmakers to abandon the proposal.

On May 27, the US Department of State announced that, in light of China’s actions, it no longer recognizes Hong Kong as politically autonomous from China— a designation the region has enjoyed under US law since 1992.

Agnes Chow, a 23-year-old Catholic with a history of student activism which she has credited to her education in Catholic social teaching, also was arrested and charged under the National Security Law. She too is currently free on bail.

Apple Daily has already filed legal suits with the Hong Kong High Court demanding the return of journalistic materials seized by police in the Aug. 10 raid.