10 Podcasts to Help You Grow in Faith 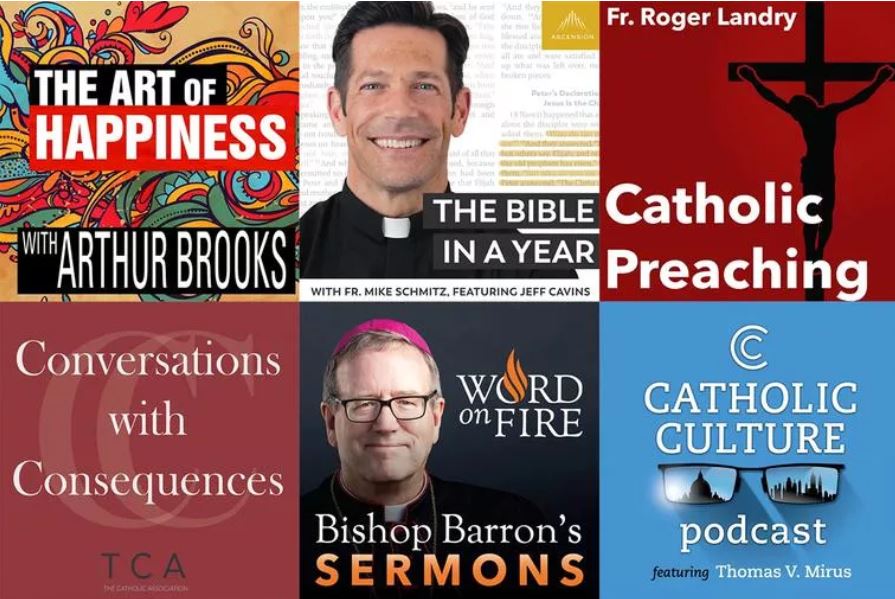 10 Podcasts to Help You Grow in Faith

COMMENTARY: At a time when Christians in general are feeling marginalized and the world is trying to pronounce the Church irrelevant, Catholics are still influencing the culture.

At the beginning of the year, there was the uplifting news that a new podcast, “Bible In A Year” (with Father Mike Schmitz), topped the Apple Podcast chart not just for religious or for Christian podcasts but for all podcasts.

It was noteworthy for a few reasons.

The first is because the Bible, and a Catholic priest, had made its debut at the top of the Apple Podcast charts, beating out formidable competition from The New York Times’ “The Daily,” “Dateline NBC,” “Crime Junkie” and many other popular, well-established popular offerings. At a time when Christians in general are feeling marginalized and the world is trying to pronounce the Church irrelevant, it was a helpful reminder of the influence Catholics still can and do have.

The second is because Catholics are listening to the Bible by the millions. For years I have been recommending, asking, encouraging, exhorting, and cajoling and calling Catholic faithful, young and old, as well as seminarians, religious and brother priests to take up the Bible and read it, reminding them that reading the Bible in a year takes only about 15 minutes a day. For Christmas I’ve purchased several dozen copies of the Augustine Institute’s Bible in a Year: Your Daily Encounter With God and distributed them as gifts to everyone to whom I give gifts, but lighting these spiritual matches unfortunately never ignited a bonfire. The “Bible in a Year” podcast has — as dozens of Catholics I know who previously had never read the whole Bible, including family members, have been faithfully listening to Father Schmitz’s daily editions.

That brings us to the third and I think most notable aspect. The success of Father Schmitz’s Bible in a Year shows the power of a podcast to foster growth in faith.

I have said often that for Catholics who want to grow in their knowledge of the faith, there has never been a greater time to be alive.

There are now several 24-hour Catholic television stations and hundreds of Catholic radio stations that are no longer restricted to particular geographical areas but can be streamed anywhere in the world. We have immediate access, in multiple formats, to the Bible in every spoken language as well as to so many great commentaries and websites that help us to understand and live it. There’s free digital access in most modern languages to the works of the Fathers and Doctors of the Church and almost every spiritual classic.

There are also so many great Catholic publishing houses printing inspiring works from authors old and new. There are Catholic newspapers and magazines that through the web have increased their scope to form and inform from an authentically Catholic perspective. There are the extraordinary apostolates of Bishop Robert Barron’s Word on Fire, the Augustine Institute’s Formed, Matthew Kelly’s Dynamic Catholic and Ascension Press’ array of scriptural and theological courses, which help people better understand the faith, live it and teach it to others.

There are, finally, millions of authentically Catholic websites and blogs, showing the beauty of the faith, carrying out the crucial work of apologetics, presenting Catholic commentary on every topic under the sun, and providing a digital narthex for millions.

But whenever I’ve mentioned those litanies in articles and homilies, I’ve never included podcasts — because, until recently, I had no exposure to them.

That changed last fall, when the podcast “Crisis: Clergy Abuse in the Catholic Church” by the Catholic Project at The Catholic University of America came out. I could find no way to listen to the series online. I had to subscribe to the podcast. So I did, and began to listen to its 10 episodes, conveniently at 2x speed, walking on the streets of Manhattan or driving to see my family in Massachusetts.

It didn’t take me long to recognize what I had been missing, both in terms of medium and message. Since then, I have been trying, methodically and joyously, to make up for lost time.

I began with a couple podcasts to which I’ve contributed but previously had never listened.

One is “Conversations With Consequences,” produced by the Catholic Association and run on EWTN radio, for which I have been recording short Sunday homilies for a couple of years. It is hosted by Dr. Grazie Christie, who interviews two to three guests each week discussing the most consequential issues of the day through a Catholic lens. My contribution finishes each episode, focusing on the consequential conversation Jesus wants to have with us each Sunday in the Gospel. I am now going back over the 105 previous episodes, learning a lot.

Another is “The Catholic Culture Podcast” by Thomas Mirus, who explores Catholic arts and culture with a variety of notable guests. He invited me on two of his early episodes (19 and 23) discussing the clergy sex abuse scandals and what must be done in response to them. Listening to those episodes two years after publication, I have also discovered Mirus’ treasure trove of episodes on music, literature, art, education and more.

From there I began to branch out.

After reading one of Arthur Brooks’ columns on “How to Build a Life” in The Atlantic, I saw in the bio-line that he was also the host of a podcast called “The Art of Happiness.” I decided to give it a try. It quickly became my favorite, as with the help of psychology, philosophy, theology, art, science, literature, humor, common sense, a variety of intriguing guests and Brooks’ extraordinary ability to interview and synthesize, he makes practical how to live a better and happier life, something that helps me as a human being as well as work as a priest.

At Brooks’ recommendation, I began to listen to “The American Story” podcast by Chris Flannery of the Claremont Institute. These six- or seven-minute podcasts focus on what has made America beautiful and worthy of love, featuring stories of figures and episodes from American history told with extraordinary eloquence by a raspy Flannery. They are a healthy, relentlessly uplifting antidote to the barrage of unpatriotic America bashing that has become popular, while at the same time not ignoring the problems that summon us collectively to improve.

One of my most moving listens each week is to “Bishop Robert Barron’s Sermons” podcast. These 15-minute gems, listened to at 2x in half the time, are a great preparation for my hearing the Word of God on Sunday and for preaching on it. That’s only one of several impressive offerings by Bishop Barron’s Word on Fire apostolate.

Right before Lent began, when I was talking to my friend, Stigmatine Father Joseph Henchey, he mentioned to me he had made, with Lisa Fortini-Campbell, two 50-episode podcasts, one on St. Peter (“Duc in Altum”) and the other on the wounds of Christ. I figured they would make great Lenten listening — and they did. Listening to Father Henchey is like listening to a Doctor of the Church. It made for one of my best Lents. Now that the Lord has called Father Henchey home on April 7, I am planning, with the help of these podcasts, to keep the conversation with him going in many Lents to come.

Finally, I, too, got into the action last fall.

Since 2004, I have had a website where I have uploaded the text and audio of homilies, articles, lectures, retreat talks and more. Over the years several have asked me to put the audio in podcasts to make it easier for them to listen to it each day without having to go to the website. I didn’t have the time, or the technical competence, to do so. During the pandemic, however, I was able to get a friend to help me upgrade the website and make podcasting the daily homilies, conferences, recollections and other recordings possible.

I’m happy that I did. But not as happy as my mother, who can now expertly say to her Amazon Echo, “Alexa, play Catholic Preaching” and then evaluate from the kitchen what her priest son preached that morning! And so podcasts apparently can help to keep the Fourth Commandment, too.

I’m still very much a beginner, scratching the surface, of podcasts and the possibilities they provide. I know that there are doubtless so many others that, as of now, I don’t even know exist.

But insofar as faith comes from hearing (Romans 10:17), I do know that podcasts are a particularly powerful medium to grow in faith and pass it one — one of which believers, the Church and her pastors should make increasing use.

Be Mindful of the Dangers of Mindf...

Pope Francis’ Advancement of the C...