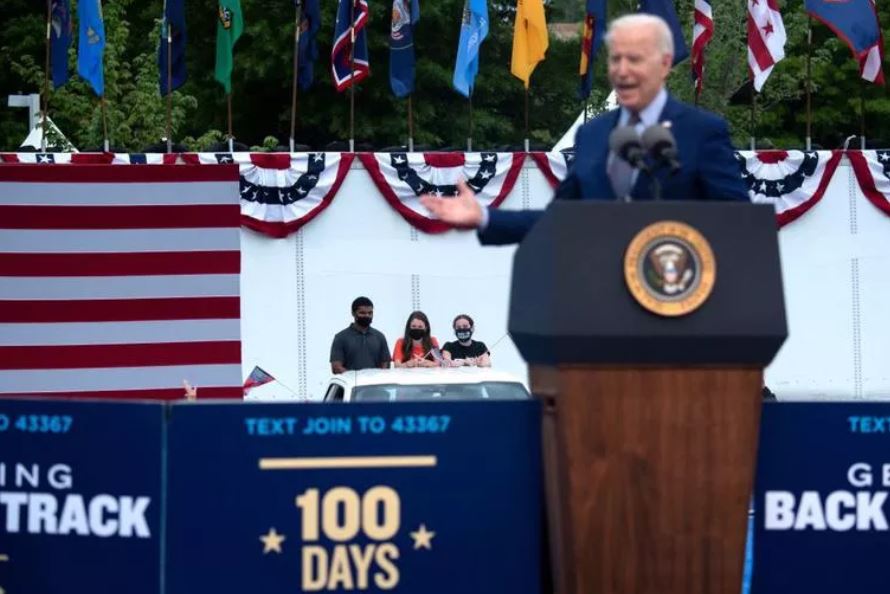 As Joe Biden passes his 100th-day mark in office today, the early returns show how, for faithful Catholics, this period couldn’t be more disappointing. There are also signs that the next 100 days and beyond will be even more disturbing.

Sadly, during the second Catholic president’s brief time in the Oval Office, Biden’s policies show he intends to govern in complete opposition to fundamental Church teachings regarding human life and sexuality, despite his spokeswoman’s continual professions of the centrality of the president’s Catholic faith.

Consider, for example, what President Biden has done already with respect to abortion.

In his first weeks in office, he issued an executive order to cancel the Mexico City Policy that prohibited U.S. taxpayer funding of abortion and advocacy for abortion abroad. The move flouted repeated reminders from the U.S. bishops about how his pro-abortion commitments conflict with the Church’s clear teaching about this preeminent moral issue of our time, as well as Pope Francis’ repeated warnings about “modern forms of ideological colonization,” including the exportation of a progressive agenda against the unborn.

With the stroke of a pen, our nation’s Catholic president forced his fellow Catholics, and other Americans who abhor abortion on the grounds of their faith-based belief in the sanctity of human life from conception to natural death, to violate their consciences by making them complicit in funding the international abortion lobby.

Biden’s executive action, undertaken with the deliberate intent to convey his complete conformity with the Democratic Party’s allegiances to Planned Parenthood and the abortion industry, was followed by the confirmation of a succession of stridently pro-abortion appointees to senior administration posts. Most notably, Biden installed Xavier Becerra as secretary of Health and Human Services. Becerra, a Catholic politician who dissents on abortion even more flagrantly than the president, began his campaign to integrate pro-abortion priorities into the framework of the federal government in April by overturning the HHS’ prohibition on Title X health-care funding being directed to organizations that are involved with abortion.

Planned Parenthood will be by far the biggest beneficiary of the Title X money that is now poised to flood into the abortion industry.

Also in April, the Biden administration dismantled the ethics committee that monitored federally funded fetal-tissue research. In effect, this move gives a green light to the evil trade in abortion-derived human body parts. Once again, Planned Parenthood — whose complicity in the trafficking of fetal organs was exposed in 2015 by the Center for Medical Progress’ undercover videos — will be a primary beneficiary of this federal action.

Alongside his promotion of abortion, Biden has gone all-in for promotion of “transgenderism” and other central elements of the “LGBT” agenda. As with abortion, Biden initiated his drive with an immediate executive order. It communicated that the federal government will now equate “gender identity” and “sexual orientation” with existing federal statutory prohibitions of sexual discrimination.

Along with facilitating destructive “gender-reassignment” medical procedures — including for minors — and compromising women’s sports by allowing competition by biological males who identify as female, legal scholars warn that Biden’s policies will inevitably transgress against the conscience rights of Catholics and others who reject gender ideology.

It should come as no surprise that President Biden is moving forward on these agendas, given his numerous pro-abortion and pro-LGBT campaign pledges. What is surprising is the new administration’s haste and intensity in pushing forward with these moves.

In general, the policies Biden is rolling out align closely with the wish list of the Democratic Party’s progressive wing, but they are opposed by a broad swath of Americans. And the intensity of Biden’s push has surprised even the progressives themselves. Reviewing his actions to date, New York Rep. Alexandra Ocasio-Cortez enthusiastically stated that they “exceeded expectations that progressives had.”

One major reason Biden has been able to enact an agenda that should be generating far more national controversy is the complicity of most major news outlets. In contrast to their reflexive opposition to almost everything the Trump administration undertook, the White House press corps has expressed little criticism of Biden’s actions to date.

No concrete answers have been given to Jensen’s questions about how Biden will reach out to those many Americans and his fellow Catholics who are concerned; instead, Psaki chalks up the worries to a “difference of opinions” and repeatedly points out that Biden “is a practicing Catholic and attends church nearly every week.”

While concerned Americans have been ignored, Democratic progressives and the mainstream secular media have been heaping praise upon Biden’s first 100 days. But the president’s aggressive and highly partisan mode of governance flagrantly contradicts the central promise he made in his inaugural address — to govern as a unifier, not a divider. His key early actions in office have secured virtually no bipartisan support from Republicans. In effect, both Biden and his Democratic collaborators in Congress are governing as if they won a landslide victory last November, even though the outcome actually was one of the closest in U.S. history. Unless that trend is checked, the Biden presidency is on track to be one of the most divisive ever, not a force for national unity.

Moving forward, it looks like Biden intends to continue with his initial “shock-and-awe” approach to national governance, rather than moderate it.

According to Axios, sources close to Biden say he is “brimming with confidence” after being able to advance so aggressively in his first three months, and therefore intends to push forward now even more aggressively on the economy, inequality and voting. Axios predicted the president will continue this push with “the unspoken Biden formula: Talk like a rosy bipartisan; act like a ruthless partisan.”

Such extreme partisanship bodes poorly for the nation’s common good. And, from a faithful Catholic perspective, there is an additional hazard associated with Joe Biden’s propensity for promoting radical agendas from behind a benign mask of genial faith. As Catholic commentator Fran Maier recently pointed out during a conference at Villanova University, “Biden’s rosary beads, his public nods to saints, and his attendance at Mass all serve to normalize his administration’s policies and actions that directly attack key Catholic beliefs on abortion, sex, family and marriage.”

In turn, this means that U.S. Catholics have a double responsibility at this political moment. We need to highlight how Biden’s policies and actions in these areas are harming all Americans. We also need to highlight how they are undermining the Church, by making it seem that it’s possible to remain authentically Catholic while dissenting so fundamentally on such key moral issues. This double challenge will not be easy, but faithfulness requires both prayer and action in defense of the truths upon which our Church and our country have been founded. Let us stay united in this effort.

Public Masses to resume in Ireland...