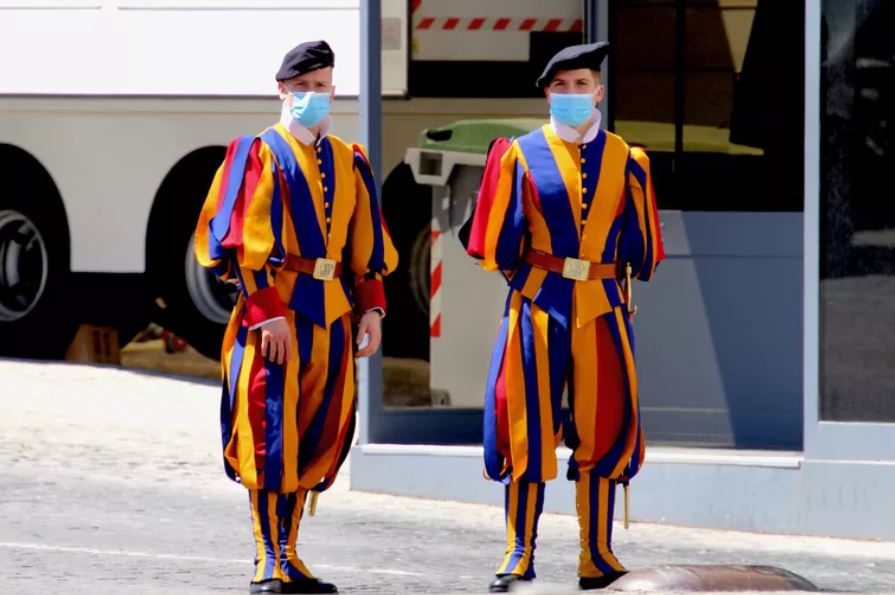 The Register has learned that since the Spring, the Vatican has been holding seminars to “indoctrinate” the guardsmen to take the anti-Covid vaccine.

VATICAN CITY — Three Swiss Guards have voluntarily left the Pope’s prestigious army corps and another three have been temporarily suspended after they refused to comply with compulsory anti-Covid vaccination being imposed by the Vatican.

Lieutenant Urs Breitenmoser, the spokesman for the Pontifical Swiss Guard, confirmed the resignations on Sunday to Swiss media, saying they had taken place “on a voluntary basis” and adding that three other unvaccinated guardsmen are now provisionally suspended from service until the vaccination cycle is complete.

The mandate, which Breitenmoser said is in line “with those adopted by other armed forces in the world,” follows announcements from other military leaders, including those of the United States, who have imposed mandatory vaccines on their armed forces.

The Register has learned that as many as 30 Swiss Guards had been resisting the mandatory jabs as recently as July, but most eventually complied, including the Guards’ commander, Colonel Christoph Graf. He reluctantly received the vaccine only a few days ago after being “threatened,” according to several sources within the corps. The Register has asked the Vatican whether it can confirm the allegation.

The guardsmen who resigned are young recruits and not career members of the corps serving as guardsmen over a longer period, a source told the Register.

Since Oct. 1, a green pass has required Vatican staff, residents, and visitors to show they have been vaccinated, had a negative test, or recently recovery from Covid. According to the Vatican, stricter rules apply to the Swiss Guard as they are in closer contact with the Pope.

The move also follows Pope Francis’ frequent promotion of the vaccines. He has called them “an ethical obligation,” and an “act of love;” on the papal flight back from Slovakia, he told reporters that “everyone in the Vatican is vaccinated except a small group that we are studying how to help.”

An informed Vatican source told the Register that since the Spring, the Vatican has been trying to “indoctrinate and convince” the young guardsmen to take the vaccine, holding special “seminars” in the barracks led by Dr. Tiziana Sansolini, a physician from the Vatican’s health and hygiene directorate.

But such pressure and compulsion appears to go against a doctrinal note issued last December by the Congregation for the Doctrine of the Faith which stated that “vaccination is not, as a rule, a moral obligation and that, therefore, it must be voluntary.”

Many Catholic faithful have resisted taking the vaccines for a variety of reasons including the fact that they are abortion-tainted, are experimental in nature, and have reportedly had harmful side effects in a minority of cases, particularly for young people who are at the least risk of contracting the virus.

Such pressure to take the vaccine in the Vatican has emerged despite the small state having been minimally affected by the virus. Since the crisis began, Vatican City State has reported zero deaths within its jurisdiction and just 27 reported cases, although most of them (11) were within the Swiss Guard. The Vatican’s last reported case was in October 2020.

Dr. Vito Del Deo, a physician who served as a medic in Italy’s Alpine Artillery Regiment Elite Corp, was disappointed by the mandate being imposed on the papal armed force.

“The Swiss Guards have sworn to serve and protect the Vatican and the Pope’s life from any threat for over one thousand years,” he told the Register. “It’s about time their care, respect and loyalty was reciprocated by the Pope and every member and citizen of the Vatican to the same degree.”

Lessons From the Head of the Holy...