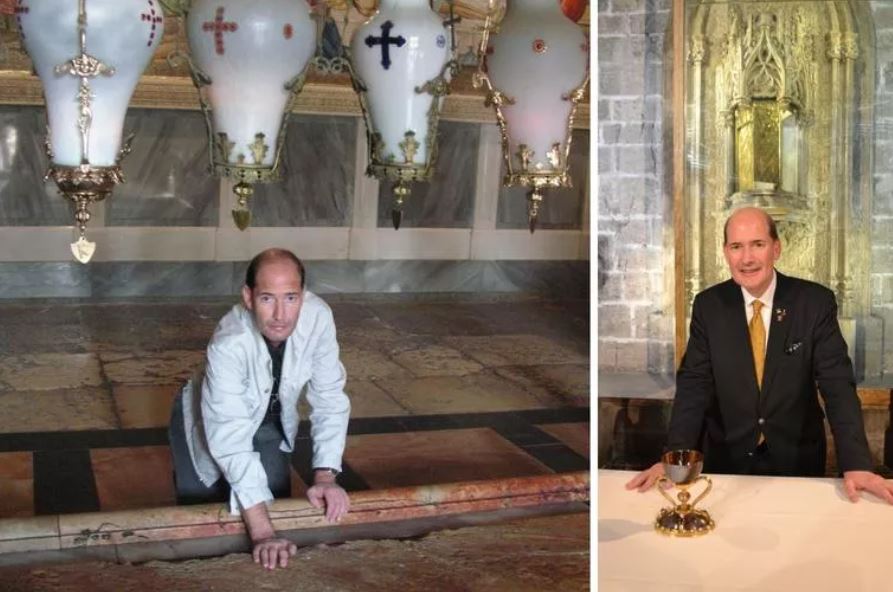 “We believe that St. Joseph was a carpenter. But that’s not exactly what the Gospels tell us. They tell us that he was a tekton, a house builder or construction worker. Keep in mind that timber is rather rare in the Holy Land, and was so in the time of Christ; thus, St. Joseph probably was using stone in most cases. It is through archaeology that we learn more about him.”

Michael Hesemann is an archaeologist specializing in Holy Land excavations and what they teach us. Ignatius Press has just published his latest book, Jesus of Nazareth: Archaeologists Retracing the Footsteps of Christ. He spoke to the Register March 29 from his home in Dusseldorf, Germany.

In this Year of St. Joseph, what archaeological evidence is there for the world in which the Holy Patriarch lived and worked? “First of all, a British archaeologist just rediscovered the house which, according to tradition, St. Joseph built for the Holy Family in Nazareth after they returned from Egypt,” said Hesemann. “It is proven to be from the time of Christ, and it is a masterpiece of construction.”

He then pointed out that archaeologists have discovered, only 4 miles away from Nazareth, the biggest construction site in all Galilee, namely, the city of Sepphoris, founded in 4 B.C. by Herod Antipas, who made it his capital. “This offered hundreds of tektons enough work for decades. We can be sure that St. Joseph and his stepson Jesus worked there. Keep in mind that, in Jewish society, a son always learned the craft of his father or foster father and that Jesus himself is called the tekton — ‘carpenter’ — in the Gospels.”

According to Hesemann, the city of Sepphoris was a modern Hellenistic polis. It had its own Greek theater where Greek drama was performed. As Hesemann observed, “The [Greek] word hypokritoi, used by Our Lord several times, has its origin there and means ‘actor.’ So Jesus did not grow up in a remote village, but in a very cosmopolitan environment and was perfectly prepared for his mission as the Messiah not just to the Jews, but to all mankind.”

What other insights do these discoveries show us about the economic situation of the place in the time of Christ? “Contrary to what Hollywood taught us, Judea was anything but a forgotten dirt hole at the end of the world at that time,” said Hesemann. “It was just the opposite, in fact. When Christ was born, under Herod the Great, Judea was a booming kingdom.

“Herod was a paranoid tyrant,” he added, “but he was a genius at moneymaking. He sold the asphalt from the Dead Sea to the Romans — which they needed for their fleet — rented the imperial copper mines of Cyprus, imported tin from Cornwall and produced bronze, the most luxurious material of the time. From this income he built not only the most splendid and opulent palaces of his time, but also an artificial harbor, Caesarea Maritima, which became his connecting point to the Roman global market.”

Hesemann says the Roman world was amazed at Herod’s achievements and in particular his magnificent temple in Jerusalem, “the most beautiful building of his age.” Furthermore, Hesemann suggests this amazement sparked an interest in Judaism that, in turn, “opened the way for Christianity” to spread across the Roman Empire through the streets and waterways of this globalized society.

“On the other hand,” he continued, “every globalization has its losers, so there also was a lot of poverty in Judaea, and there was slavery in the Roman Empire. The social differences were immense.”

Hesemann is convincing in his arguments rooted in the scientific facts assembled from archeological digs. So why, then, are there so many secular skeptics who say there is little hard historical evidence for the life of Christ, and how does he respond to such skepticism?

“First of all,” he states, “we have four biographies of Christ that were clearly based on eyewitness testimony; so many, even small details [of the Gospels], have been proven correct by archaeology.” Hesemann went on to say that the Gospels could not have been written much later, not least “because the world they describe so precisely was destroyed by the Romans between 66 and 70 A.D., when they crushed the Jewish revolt.”

Hesemann cites the first-century Jewish historian Flavius Josephus and Syrian Stoic philosopher Mara bar Serapion as well as Roman historians such as Tacitus, Suetonius and Cassius Dio, all of whom produced authoritative non-Christian texts as proof of the historical nature of what the Gospels report. “None of them ever doubted Jesus’ existence,” he adds. Then there is what Hesemann describes as “a rich local tradition,” such as the excavation of St. Peter’s house at Capernaum that revealed it had become a pilgrimage site as early as the first century.

Hesemann then speaks of an intriguing archaeological artifact: “We have half of what may be the original inscription fixed on Our Lord’s cross, giving his name and the reason for his condemnation: ‘Jesus of Nazareth, King of the Jews.’ The fragment is in Rome now, but it was dated by seven leading experts on Hebrew, Greek and Latin paleography in the Holy Land. They all dated it to the first century A.D.”

Born in 1964 in Dusseldorf, Michael Hesemann grew up near the site of an ancient Roman military camp. This, he says, fostered an interest in archaeology that persists to this day. However, he went on to study history and cultural anthropology at the University of Göttingen, Germany. Since then, he has published extensively, and his work has been translated into 16 languages. He has also participated in archaeological excavations in the Holy Land and helped date a number of discoveries and relics. In addition, he has advised and appeared on television programs for the Discovery Channel, the History Channel and EWTN. He is the author of Mary of Nazareth (2011) and co-author, with Msgr. Georg Ratzinger, of the international best-seller on Pope Benedict XVI, My Brother, the Pope (2012).

Jesus of Nazareth: Archaeologists Retracing the Footsteps of Christ was originally published in German in 2009. This latest English edition is, Hesemann says, “completely reworked and updated” and includes such recent discoveries as the findings in Magdala and Bethsaida and the 2019 discovery of a ring with the name of Pontius Pilate inscribed upon it, discovered at the Herodium near Bethlehem.

In particular, the recent archaeological finds at Magdala fascinate Hesemann. “We found the oldest synagogue in all Galilee with its original Torah stone on which they placed and read the sacred scrolls. Since, according to St. Mark, Our Lord proclaimed the Gospel in all synagogues around the lake, we can be sure he was there; his feet touched the floor, his hands touched the Torah stone, and it was there where he healed Mary Magdalene. In Nazareth we found several houses and a tomb from the time of Christ. Just the other month, the underground rooms of the Praetorium of Pilate were located beneath the former Ottoman police station in Jerusalem, next to the Citadel built over the Palace of Herod.”

Coming from Germany, Hesemann is familiar with the harm that the German higher criticism of the Bible did to the faith of many across the world by planting doubt and skepticism about the historicity of the Gospels. Speaking as a German, does he feel that modern archaeology is a way of countering the theories of the higher criticism with hard evidence?

“Absolutely, that’s why I wrote this book,” he said. “The followers of [Rudolf] Bultmann, an influential Protestant theologian of the Third Reich era, claim that the Gospels are semi-mythical and were written a generation after the events in faraway places such as Rome, Ephesus, Antioch and Alexandria and that the authors mixed up and falsified memories with elements of Greek mythology.”

“Unfortunately,” he added, “they still teach this nonsense, even in the U.S., where the ‘Jesus Seminary’ claims to decide what was really said by Christ and what was ‘invented’ [by the Evangelists]. The result is that they have invented a Christ according to their own image and concepts that have little to do with the historical Jesus of Nazareth. That’s theological relativism, and it tells you more about those who use it than about Christ.”

Hesemann explained further, “Indeed, the oldest fragment of the Gospel according to Mark, which was discovered in Cave 7 above Qumran at the Dead Sea, is dated 45-55 A.D. — so it was written and copied when the eyewitnesses [of Jesus’ life, death and resurrection] were still alive.”

As further evidence, he noted, “Mark even refers to the sons of Simon of Cyrene, Rufus and Alexander, who were members of the earliest Christian community; we found Alexander’s tomb in Jerusalem, inscribed: ‘Alexander of Cyrene, son of Simon’ and dated circa 60 A.D. Even the earliest Gospel, [ascribed to] St. John, was written before 80 A.D. — a copy having been found in Egypt and so dated. Once again: The Evangelists’ precision in so many details indicates that indeed all four Gospels were either written by eyewitnesses or are based on eyewitness testimony.”

Holy Week is when many Christians meditate in a particularly vivid way on the passion and resurrection of Our Lord. What archaeological sites would Hesemann highlight for believers so that they might better live this time in their prayer and meditation?

“My book has a whole chapter about the sites of the passion and resurrection of Our Lord,” he replied. “Of course, there is the Holy Sepulcher, which everybody knows. But what also touches me is a rather unknown site just next door, underneath the Russian convent where they excavated parts of the Herodian walls and the very gate where Our Lord passed on the way to Calvary. The original threshold remained in situ. To know that these stones were touched by his feet on the Way to Calvary makes them just an incredible site.”

He also suggested another place of note is St. Pietro in Gallicantu, built over the Palace of Caiaphas, the High Priest. “You can still see the prison cells and get an idea that in one of them Christ was held and mocked before they took him to Pilate in the early hours.”

Then there are the sites of Jesus’ resurrection appearances: “the Roman road to Motza, called Emmaus by the Romans; or the stairs of Tabgha, which St. Peter took after he jumped into the lake [following the miraculous haul of fishes] and was swimming to the shore where his beloved Lord waited for him to ask him the three most important questions in Church history and entrusted to him, once again, the universal Church,” said Hesemann. “When you go there, you get an idea that the apostles were not deluded but that Christ has truly risen!”

Hesemann feels that archaeology is not just about historical evidence, but is also an aid to understanding the Gospels in a more profound way. “God became man means that God became history,” he said. “He became man in a certain period of time and at a certain location. Divine Providence had a reason for that. Christ spoke to a certain audience and used images and parables from daily life. This was their world; it is not our world any longer. But archaeology helps us to rediscover this world and to understand Jesus’ images and parables much better.”

Hesemann suggests that the reason why St. Jerome called the topography of the Holy Land “the fifth gospel” also pertains to biblical archaeology: Archaeology “invites us to follow the footprints of Christ and to discover his world, so as to recognize that he is real, that he was really there before he died for our salvation and rose to write a new chapter in our history.”