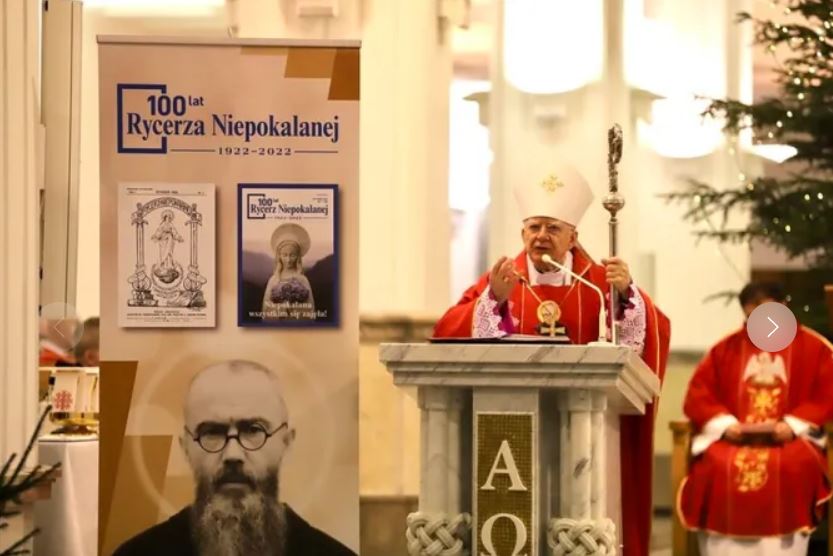 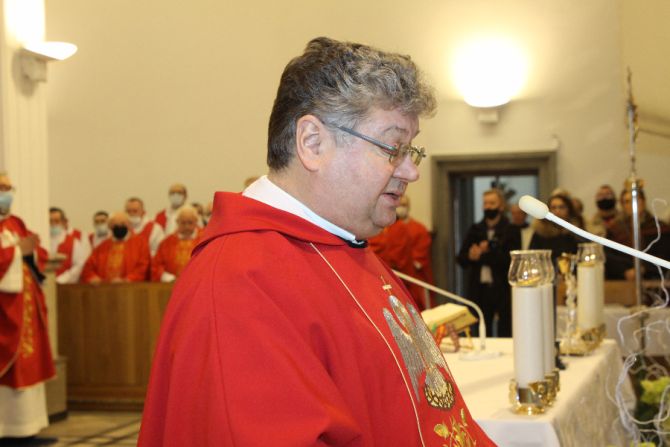 The Auschwitz martyr St. Maximilian Kolbe once said: “If we do not have Catholic media, our shrines will one day be empty.”

In January 1922, the Polish priest decided to do something about it. That month, he published 5,000 copies of the first issue of the monthly magazine Knight of the Immaculate in the city of Kraków.

The live-streamed Mass was offered at the Basilica of the Immaculate Mother of Grace in Niepokalanów, east-central Poland, where Kolbe established a monastery.

In a letter read out at the Mass, Pope Francis gave thanks for the magazine’s mission and encouraged its editors to be authentic witnesses of the faith.

In his homily, Jędraszewski described the magazine’s genesis. He recalled that Kolbe founded the evangelization movement Militia of the Immaculata in 1917. Members committed themselves to total consecration to the Blessed Virgin Mary and wearing the Miraculous Medal.

The archbishop said that the Conventual Franciscan was stirred into action by two events: a demonstration by freemasons on the streets of Rome in February of that year and the 75th anniversary of the apparition of Mary to Alphonse Ratisbonne, a French atheist who was wearing a Miraculous Medal at the time and later became a Catholic priest.

When people had to be turned away from a Militia of the Immaculata meeting in Kraków because it was too popular, Kolbe decided to link supporters through a magazine.

The problem was that he had no money. Years later, he recalled going out into the city intending to beg a few pennies from passersby to create a first edition.

“It was raining, and although I walked a few streets, I was ashamed to go anywhere and hold out my hand for alms,” he said.

“The next day, however, I had a thought: After all, it’s not for you, but for the cause of Mary Immaculate in souls. I dared then and went to the parish priest that I knew. He welcomed me warmly, made a donation for a new magazine, brought me to his vicar for the same purpose, and gave me several addresses.”

Jędraszewski recalled that the first issue set out the publication’s goals: the formation of believers and the conversion of non-Catholics.

The magazine, financed entirely by donations, took off, reaching a peak circulation of 1 million copies in 1938.

The archbishop noted that the magazine continues to have a sizable circulation, of around 45,000. Following the saint’s wishes, it does not have a cover price and is made available to people who cannot afford a subscription.

“It is very important to convert to the brilliant inspiration of Father Maximilian Maria Kolbe,” Jędraszewski said.

Kolbe was born in Zduńska Wola, central Poland, in 1894. As a child, he saw an apparition of the Virgin Mary holding two crowns. She offered him the crowns — one of which was white, symbolizing purity, and the other red, indicating martyrdom — and he accepted them.

Kolbe joined the Conventual Franciscans in 1910, taking the name Maximilian. Fascinated by the possibility of space travel, he designed a craft known as an “Etereoplan” in 1918.

In the early 1930s, he founded monasteries in Japan and India. He was appointed guardian of Niepokalanów monastery in 1936, founding the station Radio Niepokalanów two years later.

Following the German occupation of Poland, Kolbe was sent to Auschwitz concentration camp. At a roll-call on July 29, 1941, guards selected 10 men to be starved to death as punishment after a prisoner escaped from the camp.

When one of those chosen, Franciszek Gajowniczek, cried out in despair for his wife and children, Kolbe offered to take his place.

The 10 men were held in a bunker where they were deprived of food and water. According to witnesses, Kolbe led the condemned prisoners in prayer and singing hymns. After two weeks, he was the only man still alive. Kolbe was killed by an injection of phenol on Aug. 14, 1941.

Concluding his homily, Jędraszewski noted that the Church celebrated the Solemnity of the Epiphany on Jan. 6.

“It is necessary to have open eyes and fortitude of mind to be able, following the example of the Three Wise Men, to approach the Child Jesus, sent out of love by the Father, and to fall on one’s face before Him, with utmost reverence and bowing,” he said.

“In this work of the revelation of God to the world is also inscribed the current activity related to the editorial and publication of the monthly magazine Knight of the Immaculate.”

“It also has to reveal Christ to the world through a healthy anthropology, or vision of man, showing the full truth about the Church and pointing out that we are not alone in the midst of overwhelming evil.”

“May this mission of revealing the truth about God’s love to the world last as long and as effectively as possible.”

Catholic priest in India will face...