Abortion Survivor Claire Culwell: ‘I Can Trust God, and That Gives Me Hope’ 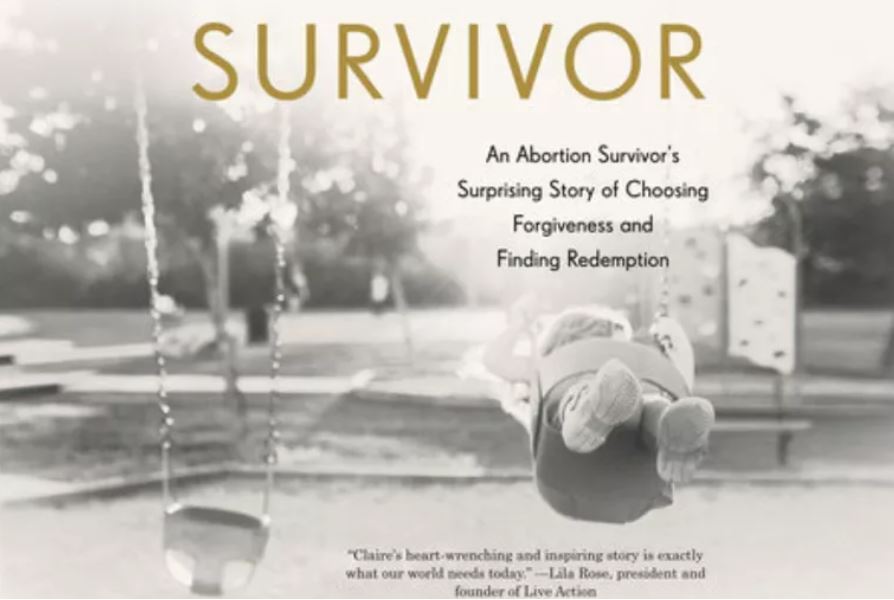 Abortion Survivor Claire Culwell: ‘I Can Trust God, and That Gives Me Hope’

In shedding light on the pain of being an abortion survivor, Culwell hopes readers will open their eyes to the ‘humanity of the unborn child.’

As a national and international speaker advocating for life as well as the host of the “Called to Be Bold” podcast, Claire Culwell has been sharing her amazing story of being an abortion survivor. Now, in Survivor: An Abortion Survivor’s Surprising Story of Choosing Forgiveness and Finding Redemption, Culwell brings to light her complete story from surviving an abortion that took the life of her sibling because the abortionist didn’t realize her mother was pregnant with twins, to growing up in a loving adoptive family, meeting her birth mother, and advocating for the lives of unborn babies as well as their mothers.

In a recent interview, Catherine Hadro, host of EWTN Pro-Life Weekly, said of the book, “Claire’s perspective as an abortion-attempt survivor not only tells her own powerful story but also shows how every family member’s journey is intricately woven together to reveal God’s great love and plan for us.”

Before Survivor’s official release, Culwell spoke with the Register about how and why she decided to write this book about her life’s journey.

“My birth mother and I met 12 years ago,” Culwell said. “About 10 months after, I was on a stage for the first time, telling my story across the country and the world. What I learned is that people don’t think about a baby surviving an abortion and what that baby will grow up to be. There were so many big God moments that got me to where I was,” including reaching out “to my birth mother with forgiveness and love.” To tell her full story, which can’t be done in the confines of a single talk or appearance, she decided to put it into a book “so people can humanize the human child and know how that child grows up to be a person with a plan designed by God.”

In the book, Culwell shares stories of what it was like growing up in a loving family with her dad and mom, Warren and Barbara Culwell, after she was adopted. Among her memories of loving times, there are also other remembrances, including how many of her peers would ask her and her sister Rachel, who is also adopted, many questions. Often, they would express sadness for the sisters’ adoptive situation.

Claire would reply, “What do you mean? Adoption is not terrible. Our parents have told us our entire lives we are wanted and loved, and God got our family together.” She continued, “We were always surprised by those questions. The way I was raised and my adoption are part of the reason I eventually met my birth mother and learned I was unwanted at the time and had my twin taken away from me. But I remember my parents always said I was wanted and loved and born for a purpose, and everything was knit together as it was supposed to be. So I’ve always known I was wanted and loved and chosen.”

Culwell’s survival story is unique, because the abortion took the life of her twin, whom she thinks about often. She told the Register, “We don’t know if it was a boy or a girl. I’ve always imagined a brother named Warren Culwell Jr., as part of my healing process, since that is the name my parents would have chosen if they had had a son. When I think about my twin, it is hard to think about what he or she would have experienced in the womb. I would have been next to him when his body was ripped apart. I’ll never know what his or her life would have been like, but at the end of the day, I can know that the God who created me and my twin — who created every single one of us — knew what he was doing. He writes our story perfectly. I believe he wrote our story the way he did for such a time as this, so the legacy of my twin through my life will tell the story and will expose the truth about abortion and what happened. Instead of focusing on what I’m missing because of the absence of my twin, I focus on the legacy of my twin’s life through sharing our story.”

Have Culwell’s unique experiences brought her closer to God? “Absolutely,” she answered. “My entire life points to a trustworthy God. My relationship with God as I learned I survived an abortion has grown. It hasn’t been the most comfortable thing, taking a stand and talking about the most controversial issue of our time, but God is trustworthy. And I trust him even in the moments I’m confused. Looking back on my life, I can see how God came through and made a way when I didn’t see one and created something beautiful and possible from something meant to harm me. I can trust God, and that gives me hope.”

In her book, Culwell suggests practices for advocating for life and supporting women in difficult situations. “When I learned I survived an abortion, it was the first time I’d really thought about abortion at all, or about what it does or how women often suffer from past abortion experiences,” she told the Register. “I grew up in a Protestant evangelical Bible church. I still attend a Bible church, but what I’ve noticed is that the Catholic Church understands and advocates for women and children while some Protestant churches are silent. I didn’t know where I could turn to, when I should have been able to turn to churches or other believers, but there was apathy, and there was silence. That is exactly what women facing abortion see; and they hear the message that there is no grace, there is no mercy, and there is no place they can come to with an unplanned pregnancy. But the abortion industry says, ‘We’re here for you, and we can solve your problem.’ In the same way, churches need to help make choosing life possible by walking alongside those who are struggling and by saying, ‘We’re here for you. God can turn this into beauty. We’re going to walk along with you and make the impossible possible for you.’ Churches can also partner with those that are already walking alongside women who need it. Imagine a culture that truly valued women. I don’t think we would have the problem we have with abortion if churches would just lead and offer grace and hope.”

In this new book, as well as in her speaking engagements, Culwell reminds audiences how others have been affected: “Looking at me, many people can see a personification of the millions of lives that could have been but instead never were.”

Culwell has described herself as an introvert and explains that she had to overcome personal fears before becoming an advocate the pro-life cause. But, she adds, that also has enables her to encourage others who might be struggling with what they believe God is calling them to do in their lives. From her experience, she offers firsthand guidance.

“We live in a culture which values comfort and doesn’t want to offend each other,” she said. “So a lot of time, people want to stay in their comfort zone and stay silent on things that matter. We just have to trust in God, who knows everything that is going to happen before it happens and brings good out of evil, and who is calling you to something greater than you can imagine. The journey I’ve been on is definitely greater than any I could have planned for myself. But you can trust God when he calls you out of your comfort zone and when he calls you to stand for truth and justice. When we allow God to take us out of our comfort zone, that’s when he works through us. Every one of us is being called to those things. Even when I feel scared, I want to be obedient and trust God is going to go before me.” People can do the same and “be part of a culture that stands for truth and justice.”

It is a lesson Culwell learned continuously while growing up. She explained, “I watched my parents every single day being obedient to God. When I was small, we lived in Mexico and Costa Rica. My parents were missionaries, sharing the Gospel with people across the world. I imagine that was uncomfortable. But they were obedient to God even when things were hard, and I wanted the fruits of that — being obedient to God.” If one finds him or herself asking, “Should I stay in my comfort zone or do what God wants me to do?” Culwell has the answer from her own experience. Say, “Yes, God, I trust you. You make a path every single time, and you use obedience to advance the Kingdom, truth and things that are good.”

Culwell wishes every reader recognizes key takeaways from her book: “I hope people who have never thought much about abortion will recognize that through the story of an abortion survivor, they can acknowledge the humanity of the unborn child. And the women like my birth mother, who experience pain and regret, can hear the story of hundreds of thousands of women who regret abortion. I pray, as a society, we will stand up for women and families and not take the lives of those like my twin.

“God has taken me out of my comfort zone to tell my story, and I hope people will be encouraged to come out of their comfort zones. I also hope people will see that God wants to meet us and walk alongside us through pain. He will if you allow him to. I hope you will be encouraged that, through Christ, there is forgiveness, hope and mercy, and there is a way even when you don’t see one.”

Scientist: ‘When We See the Shroud...