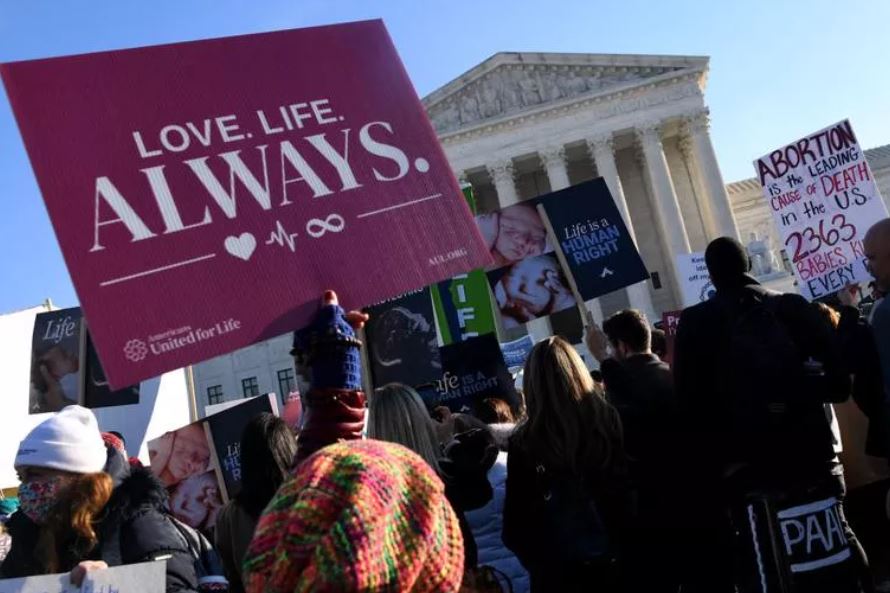 At least five of the U.S. Supreme Court’s nine justices appear to be inclined to strike down the framework for legal abortion that was established by the court’s ‘Roe v. Wade’ decision in 1973.

WASHINGTON — Pro-life and pro-abortion advocates both came away from oral arguments in Dobbs v. Jackson Women’s Health Wednesday believing that the days of adhering to the framework laid out in the 1973 Roe v. Wade case legalizing abortion are likely at an end.

At least five out of the nine Supreme Court justices expressed skepticism about the viability standard set forth in Roe and reaffirmed in the Court’s 1992 Casey v. Planned Parenthood decision. There were also tough questions regarding the constitutionality of the right to abortion put forth in Roe and Casey as well as advances in the past 50 years that call into question elements of the decision. Several legal experts told the Register that it is likely the court will overrule Roe v. Wade.

During oral arguments, the justices examined the question of whether “all pre-viability prohibitions on elective abortions are unconstitutional” in the case of Mississippi’s 15-week ban on abortion. The case is the most significant revisiting of Roe since the court’s Casey decision.

Sherif Girgis, associate professor of law at the University of Notre Dame and former clerk to Justice Samuel Alito, told the Register that “there were a lot of people who at 9:59 this morning would have told you there’s no chance they overturn Roe, but by the end of the argument said that’s the most likely outcome.”

“The reason is that Justice [Brett] Kavanaugh, who’s widely seen as the swing vote, made it fairly clear that he thinks the Constitution leaves abortion to the people,” Girgis said.

Kavanaugh characterized Mississippi’s position as “because the Constitution is neutral, that this court should be scrupulously neutral on the question of abortion, neither pro-choice nor pro-life, but, because, they say, the Constitution doesn’t give us the authority, we should leave it to the states and we should be scrupulously neutral on the question and that they are saying here, I think, that we should return to a position of neutrality on that contentious social issue rather than continuing to pick sides on that issue.”

Robert George, the McCormick professor of jurisprudence at Princeton, told the Register that in those remarks Kavanaugh was “both showing his hand and trying to do a bit of public education. He was letting the public know that if the Supreme Court reverses Roe, that does not mean that abortion would suddenly become illegal. It would mean that the decision about what regulations, if any, would be placed on abortion or restrictions or prohibitions would be in the hands of the people acting through their elected representatives. The court was simply getting out of the issue.”

Megan Wold, an attorney practicing in appellate and constitutional law who is also a former law clerk to Alito and a former deputy solicitor general in Ohio, told the Register following oral arguments that “the chances of the complete overruling of Roe and its progeny Casey is very likely.” She said “a majority of justices indicated some view that Roe was wrong when decided, that it was inconsistent with our history and tradition, that it has been outpaced by advances in medical science, but also changes in the law.”

The Limits of Precedent

Wold highlighted questioning from Kavanaugh where “he articulated a long list of important Supreme Court precedents that everyone recognizes as important moments in Supreme Court history, all of which were themselves overruling decisions that came before them. The idea that the court always adheres to its precedent or never revises what it’s done is simply not true.”

“If you think about some of the most important cases, the most consequential cases in this court’s history, there’s a string of them where the cases overruled precedent,” Kavanaugh said. “If we think that the prior precedents are seriously wrong, if that, why then doesn’t the history of this court’s practice with respect to those cases tell us that the right answer is actually a return to the position of neutrality and not stick with those precedents in the same way that all those other cases didn’t?”

Wold also mentioned Alito’s questioning regarding “whether you can overrule a precedent simply because it was wrong” referencing an exchange he had with the government’s attorney, Solicitor General Elizabeth Prelogar. Alito asked Prelogar about Plessy v. Ferguson, the 1896 case in which the Supreme Court found that segregation laws did not violate the Constitution. The case was overruled in the court’s 1954 Brown v. Board of Education decision.

“Suppose Plessy versus Ferguson was re-argued in 1897, so nothing had changed,” Alito posited. “Would it not be sufficient to say that was an egregiously wrong decision on the day it was handed down and now it should be overruled?”

He pressed on, “Can a decision be overruled simply because it was erroneously wrong, even if nothing has changed between the time of that decision and the time when the court is called upon to consider whether it should be overruled?” Prelogar responded that, “this court, no, has never overruled in that situation just based on a conclusion that the decision was wrong. It has always applied the stare decisis factors and likewise found that they warrant overruling in that instance.” (Stare decisis is the legal principle of relying on precedents, when deciding subsequent similar cases.)

Wold noted that “the government is in a very awkward position of arguing, I think, nonsensically, that no, you would have to let these stare decisis factors play out.” She said with exchanges like this, “the justices were indicating one, we think Roe was wrongly decided; and then two, that may be enough right there, but we also have these factors where we look at our precedents and we generally retain them unless certain factors are met. And there’s a lot of discussion of those factors being met here that our scientific and legal understanding has progressed [since Roe and Casey], that we know more about fetal life, that we know more about the interest on both sides.”

Katie Glenn, government affairs counsel at Americans United for Life, told the Register that “in a lot of ways the pro-life movement got what it’s been asking for,” saying the justices asked “many good, substantive questions” including a point raised by Chief Justice John Roberts ”that we’re one of just seven countries in the world that has abortion throughout pregnancy.”

Justice Sonia Sotomayor said the move to overturn Roe was “political” and asked Mississippi Solicitor General Scott Stewart, “will this institution survive the stench that this creates in the public perception that the Constitution and its reading are just political acts?”

He replied that “the concern about appearing political makes it absolutely imperative that the court reach a decision well-grounded in the Constitution, in text, structure, history and tradition, and that carefully goes through the stare decisis factors that we’ve laid out.” George commented of Sotomayor’s concern that “whatever the court does, the losing side will accuse the court of being political.”

Chief Justice Roberts asked “if you think that the issue is one of choice, that women should have a choice to terminate their pregnancy, that supposes that there is a point at which they’ve had the fair choice, opportunity to choice, and why would 15 weeks be an inappropriate line? Because viability, it seems to me, doesn’t have anything to do with choice. But, if it really is an issue about choice, why is 15 weeks not enough time?”

Julie Rikelman, the attorney for Jackson Women’s Health in the case, told Roberts that “without viability, there will be no stopping point. States will rush to ban abortion at virtually any point in pregnancy. Mississippi itself has a six-week ban that it’s defending with very similar arguments as it’s using to defend the 15-week ban.”

George said that the chief justice kept hearing “from both sides that if not viability there’s no other standard that you could claim that has any reasonable anchor in the Constitution. Of course, for those of us who were against Roe, that’s been one of our complaints all along — that the viability standard itself has no anchor in the Constitution. There’s no constitutional basis for believing that viability makes any difference to the moral status or the personhood of an unborn child or to the states’ interest in fetal life.”

Alito said in regards to viability, “What is the philosophical argument, the secular philosophical argument for saying this is the appropriate line? There are those who say that the rights of personhood should be considered to have taken hold at a point when the fetus acquires certain independent characteristics. But viability is dependent on medical technology and medical practice. It has changed. It may continue to change.”

Girgis said that it became clear during oral arguments that “while the chief justice asked about that several times, nobody thought there was a middle ground. The lawyers for the Biden administration, the lawyers for the abortion businesses all said that, ‘There is no principled middle ground, it’s all or nothing.’ Gorsuch got them clearly on the record on that.

“None of the other justices seemed interested in a middle ground,” he added. “Nobody else in the discussion offered one. So if they’re going to uphold the law, if there is no middle ground for doing so, if nobody but the chief is showing any interest in doing so and Justice Kavanaugh is clearly signaling that he thinks this issue belongs with the states —  it’s hard to see how they do anything but overturn Roe.”

Wold noted that “both sides are coming to the court saying if you uphold Mississippi’s ban and if you allow pre-viability restrictions on abortion, you are overruling Roe v. Wade and there really is no middle ground.” She said there was also “a lot of willingness among actually six members of the court not to retain that viability holding which both sides say is overruling Roe.” She added that it was “notable that no justice articulated some kind of standard that would supplant Roe. There was a lot of discussion of the viability line and does it stand or not, but nobody previewed some new way of balancing these interests on both sides … the justices themselves, they didn’t seem to articulate a middle ground position where somehow, we would reimagine the abortion right and it would still exist but be curtailed in some way. That’s heartening for pro-life advocates and it does likely spell the demise of Roe.”

Glenn said that both sides in the case have really said, ’there’s not a middle path here.’” One possibility she sees is ”a 5-1-3 type of breakdown with the opinion where you’ve got the chief standing alone in writing his own theory of what would be the best path forward,” saying, ”he’s trying to find that middle ground, but the parties themselves really didn’t leave space for one.”

According to George, “The most interesting question at this point is what will Chief Justice Roberts do? If five justices, as I suspect, are prepared to overturn Roe then will he join them, or will he write a concurring opinion, or would he join the dissent? He’s unlikely to join the dissent because he seemed to signal that he wanted to uphold the Mississippi law, but he’s not a sure thing to vote to overturn Roe.”

On the other hand, George continued, “If Roe is going to be overturned, he might reason that it would be better to do it 6-3 than by a narrow 5-4 majority — that it would be a more secure way to do it, one that would give the decision more standing than a narrow majority.”