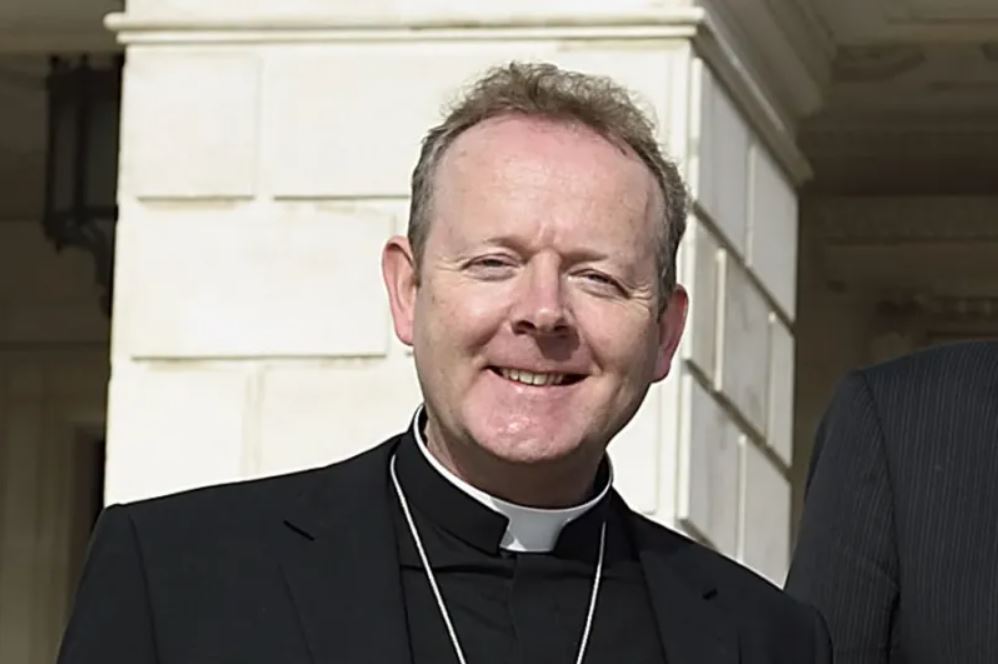 A senior Catholic archbishop has accused the Irish government of introducing “draconian” new regulations on public worship “in a clandestine manner.”

A senior Catholic archbishop has accused the Irish government of introducing “draconian” new regulations on public worship “in a clandestine manner.”

In an April 18 statement, Archbishop Eamon Martin called for an urgent meeting with the authorities and said that the Catholic Church was seeking legal advice on the new measures.

The regulations are contained in a six-page document known as statutory instrument 171 of 2021, approved by health minister Stephen Donnelly on April 12.

The text forbids large indoor gatherings due to the coronavirus pandemic, with a narrow list of exceptions, including for priests celebrating Mass via live stream, as well as wedding receptions and funerals.

Martin, the archbishop of Armagh and Primate of All Ireland, said that Ireland’s Catholic archbishops only became aware of the new restrictions on April 16, when they were published in the Irish government’s official gazette, days after they came into effect.

“The precise provisions are unclear and at first reading appear to be draconian, going further than the restrictions we have been cooperating with throughout the pandemic to date,” he said, speaking on behalf of the country’s four Catholic archbishops.

“We shall be seeking legal counsel to advise on several questions concerning the extent of the statutory instrument.” 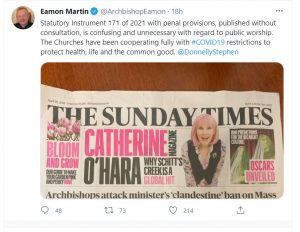 Martin was among Christian leaders who met with Taoiseach Micheál Martin on April 15.

A communiqué issued after the meeting said that the Irish prime minister and the church leaders looked forward “to the time when church services and other in-person activities can resume.”

Martin expressed disappointment that the new measures were introduced despite the Taoiseach’s assurance that he understood the importance of worship for the Irish people.

Under government health measures, public worship has been suspended in the country since Oct. 7, 2020 — among the longest restrictions in Europe.

The Irish government has signaled that, as its vaccination program advances, it will begin to relax restrictions cautiously in May. Catholic bishops have urged the authorities to prioritize the resumption of public worship.

Public Masses resumed over the border in Northern Ireland on Good Friday, April 2.

Writing on the Diocese of Elphin’s Facebook page, he suggested that the measures were incoherent.

“The statutory instrument makes it a crime to attend a ‘specified event’ and then goes on to list various exceptions. A minister of religion may attend Mass ‘to lead worship or services remotely through the use of information and communications technology.’ That raises the question as to whether it is the fact of being broadcast that makes Mass lawful.”

He continued: “The statutory instrument has also created an odd anomaly because, while it states that wedding receptions are not ‘specified events,’ the clause which allowed ministers of religion to actually celebrate a marriage, which was there in previous guidance, has been removed from this latest statutory instrument. The minister needs to revisit this.”

Irish broadcaster RTÉ reported that the health minister had indicated his willingness to meet the bishops to discuss the new regulation.

Croatia offers scholarships to you...