An Exorcist Encounters the Power of the Sacred Heart of Jesus 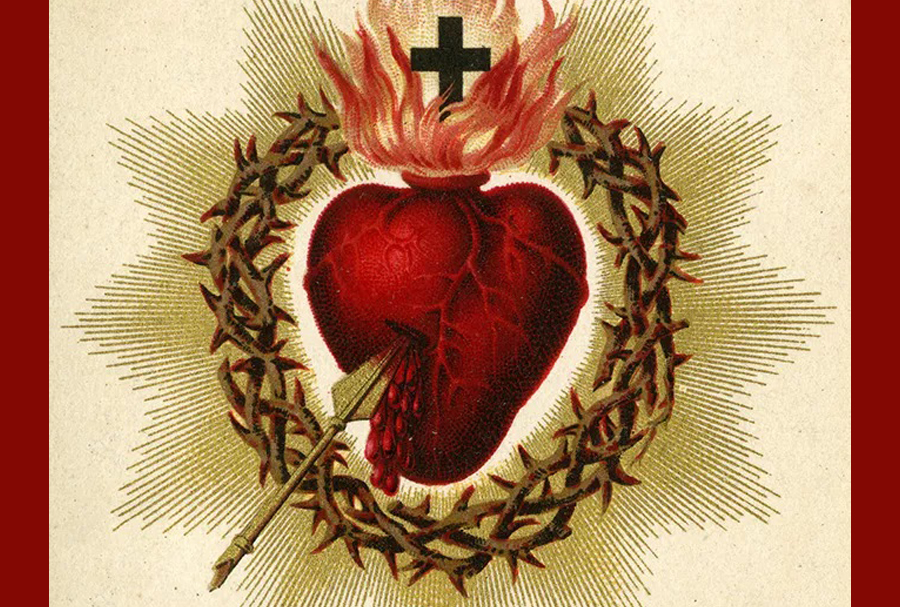 An Exorcist Encounters the Power of the Sacred Heart of Jesus

“The Sacred Heart builds a fire of love in every heart.”

Ultimately, civil authorities will not solve our spiritual problems. We should pray and fast for them and for strong leadership in our Church, but we can also create a fortress of spiritual protection by putting ourselves under the sovereignty of the Sacred Heart of Jesus.

Jesus revealed the extent of his burning love for us through visions to St. Margaret Mary Alacoque, a nun in Paray-le-Monial, France, during the 17th century. Devotion to the Sacred Heart has actually been a part of the Church throughout history. In 1956, Pius XII’s encyclical Caritate Christi Compulsi on the theology of the Sacred Heart, explained that devotion to the love of God goes all the way back to the Old Testament.

During apparitions to St. Margaret Mary in 1674, Jesus made Twelve Promises to those who honor and spread devotion to his Sacred Heart, one of which was, “I will bless every house in which an image of my heart shall be exposed and honored.” Inspired by that promise, Father Mateo Crawley-Boevey (1875-1960), born in Peru, began promoting enthronement of the Sacred Heart as our King on Aug. 24, 1907, “to conquer the whole world for the Heart of Jesus, home after home, family after family.” Each of the five popes who reigned during the life of Father Mateo endorsed and blessed his work — St. Pius X, Benedict XV, Pius XI, Pius XII and John XXIII.

This old devotion has taken hold again among many Catholic families. We can enthrone the Sacred Heart of Jesus over our homes and other places as has even been done in some Catholic dioceses, by proclaiming our allegiance to him and placing ourselves under his divine protection.

An Exorcist’s Mystical Encounter in Rome

Msgr. John Esseff, a priest in the diocese of Scranton, Pennsylvania, one of the oldest exorcists in the country at age 92, and a former spiritual director of St. Teresa of Calcutta, dedicated his priesthood to the Sacred Heart. He explained to me in a previous interview that his devotion to the Sacred Heart began during a visit to Rome in 1959, shortly after an enthronement ceremony in his rectory:

I decided to visit two major basilicas in Rome — St. Mary Major, and the most ancient of the four, St. John Lateran. When I entered the Blessed Sacrament chapel at St. John Lateran, I had the most overwhelming experience of prayer in my entire life. I was overwhelmed by the presence, the majesty, the awe and the power of God. It was so overwhelming that I was unable to stand. I felt myself forced to my knees and in an instant was prostrate on the floor in front of the Blessed Sacrament. The awesome presence of God seized me and I was trembling and crying. All I could say to God was, “What do you want, Lord?”

I heard the Lord answer: “Charity.” I was unable to move, even to stir. The state of ecstatic prayer lasted for a long time. When I got my bearings, I got up and walked closer to the Blessed Sacrament altar. I had the same experience of the presence of God and I knew that it was the Lord Jesus. I wept and cried out: “What do you want, Lord?”

“Love,” was the answer. I waited for the longest time to hear what more might come. The ecstasy lasted a long time. I walked before the Blessed Sacrament altar. A third similar experience began. I lay on the floor in prayer and the Lord said, “Teach the love of my Sacred Heart.” Sometime after that I heard: “Learn more about the pope buried in this chapel.”

When I got up from this experience, I knew I would do whatever God wanted me to do. I felt quite dazed. It had been early morning when I had entered St. John Lateran, but by the time I got ready to leave it was late afternoon. A tour passed by me and I heard the guide telling people that Pope Leo XIII was buried in this chapel. I looked around and saw a tomb elevated on the wall in the Blessed Sacrament chapel. I stayed and prayed before the tomb. I knew that Pope Leo had addressed many social issues concerning the poor and the laboring classes.

After my return home, I researched and learned that the last act of Pope Leo’s papacy was to enthrone the whole world to the Sacred Heart of Jesus. I understood now that devotion to the Sacred Heart was to be a significant part of my priesthood. It became both my personal devotion and one that I have promoted to others. I have come to see that Jesus desires to be king of the entire world and I must promote this devotion to everyone.

When we place the image of Jesus in a place of honor and publicly proclaim him Lord, it’s a symbol in which we show the whole world that this home is under the heart of Jesus. This recognition of the kingship of the heart of Christ over us is not reserved just for families, but is open to individuals, parishes, diocese, communities and institutions.  When we make a covenant with the Sacred Heart of Jesus to live under his kingship, we thereby accept his lordship over our families and over the world.

The Sacred Heart builds a fire of love in every heart. If they have Jesus, no matter the denomination, they have the fire and that fire is the Holy Spirit. Although there is a tangible ceremony to enthrone the Sacred Heart of Jesus, it is the commitment and the consecration of families, giving themselves over completely to the rule of Jesus that follows.

I have enthroned Jesus in prison and have seen amazing transformations. Every institution needs to be transformed; judicial, nursing homes, mental institutions, schools, the whole of society needs to experience the civilization of love. Nothing should be excluded because all of humanity longs for God’s love. Every human heart was made for Jesus and his civilization of love. We are all one with each other in Christ, and there is nowhere that he does not belong.

In 2009  Bishop Paul Zipfel enthroned the Sacred Heart of Jesus over my Diocese of Bismarck. The pastor of the Cathedral of the Holy Spirit at the time, Father John Guthrie, followed suit with the parish. Our current bishop, Bishop David Kagan, re-consecrated the diocese to the Sacred Heart of Jesus and consecrated western North Dakota to the Immaculate Heart of Mary for the first time to close the Year of Faith during Sunday Mass on Nov. 24, 2013, on the solemnity of Christ the King of the Universe. As quoted by the Dakota Catholic Action, Bishop Kagan said, “What better way for each of us to bring the joy of knowing Jesus as our friend than through his Sacred Heart from which we receive all graces for the salvation of every soul.”

The feast of the Sacred Heart is June 19. The Bismarck diocese has information here on doing an enthronement. You can also visit SacredHeartApostolate.com (bottom left of their homepage) for resources.