Andrea Bocelli Talks About His Catholic Faith: Don’t Believe in the Clock Without the Clockmaker 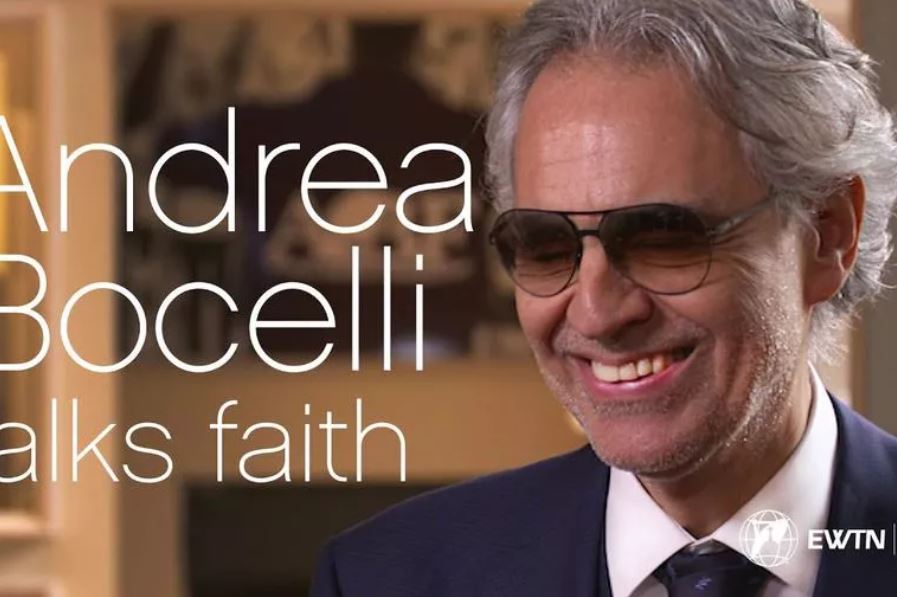 Andrea Bocelli Talks About His Catholic Faith: Don’t Believe in the Clock Without the Clockmaker

Andrea Bocelli and his wife discuss Andrea’s music and message to the world, their foundation, faith, and life together as they serve people most in need.

In an interview with Colm Flynn for EWTN News In Depth, Andrea Bocelli, Italian opera tenor and multi-instrumentalist & his wife Veronica Bocelli, share intimate details about the musician’s faith, his career, their foundation, and a special message for those in suffering amid the pandemic.

Andrea, Veronica Bocelli, thank you so much for your time and for inviting us here to Florence.

We’re sitting here in your new headquarters for your foundation and it is a beautiful facility. Andrea, just remind us, why did you start this foundation back in 2011?

“Well, it was a very difficult period at that time. The economic situation was becoming very very complicated and I thought now it’s time to do something because we are lucky. In my life, I’ve been very, very lucky and I must do something for the world.

“What was it, Andrea, when you looked around at the situation, what saddened your heart and made you want to help?”

If I had to fix a moment in which the need to do something for the world arose within me, that moment was the time when Veronica woke me up in tears because of what happened in Haiti with the earthquake and the tragedy that was happening in this country (which was) already stricken with an unjust fate. Then, the images that came in. Veronica, who had already been active, spoke with the First Lady to organize first aid, etc. In that moment, I understood that the moment had arrived to be active and do something.

And Veronica, among all the many other things you do, you’re heavily involved in the foundation. Give me an example of some of the projects that you work on.

When we started almost 10 years ago, I mean this year is going to be the 10 year celebration, which is a big number from a certain point of view and a very small one on the other, so I wanna believe that whatever we have been able to achieve in the past years is just a kickoff for what we can do in the future. So in the past ten years, we have also changed and moved and you know, reshaped our project depending what we were working at, what was really making the difference in somebody’s life. So at the beginning, we started far away in Haiti in a little island that seems to be forgotten by God, but I found God there more than anywhere else, so it’s interesting. A lot of people ask, “why you went there?” And we always answer this was not searching for that little island far away but the people calling us heart to heart. So we started with education, with school there and, of course, we developed thinking that if you really wanna take care of somebody you have to care of their education and the health, so each children have been followed in every need that it have. And from that moment, I sort have been a period in our life, we felt the necessity to be back in our country and also help maintaining that project by help also our country that was really in need after the earthquake.

You mentioned that you discovered so much God there. What did you mean by that?

In Italy, we say, sometimes people used to say it’s a place forgotten by God. But if you go there and you really see the amazing power of life and you can really witness how much you can change somebody[’s] life, not you, but what the foundation, what the people in general can be helpful in other’s lives, that’s God, that’s means that whenever there is one or more person praying together, pray in this case means just to be together to do something good for somebody else then God’s there.

Andrea, speaking of God with Veronica, I know that you are a man of strong faith. You have a strong Catholic faith. How important is your religion to you?

But for me, let’s say it is a reason for life, because life, even when it lasts 100 years, is an insignificant segment in relationship (comparing) to eternity. If life didn’t exist…an eternal life, life after life, then everything would lose all meaning. But as my faith comes from an extremely simple reasoning: I do not believe in the clock without the clockmaker. I do not believe that one can make something without someone who designed it being made. Therefore, I have faith, I have a lot of faith in the one who made the world.

And throughout your life, Andrea, how has your faith really helped you get through events and your career?

It is absolutely true that to whom much is given much is asked. I cannot imagine what will be asked of me when I find myself face to face with the one who made the world, because, objectively, much has been given to me. I have been given a unified family that has supported me, loved me, etc. I have been loved by friends that I have close to me, from my life partners, from children, and then from fans. I’ve had a life rich of possibilities, of experiences, so much received is so much I should try to give.

Did you ever imagine, Andrea, when you were a young boy growing up in Italy that one day that you would be this huge star all over the world, loved by so many, selling 45 million records and now having your own foundation? Did you ever imagine this in your wildest dreams?

No, no, absolutely. No one can imagine anything that will happen – but it happened. Success eh, is an accident on the road. IIt is something that happens because as Dante said, “It is so willed there, where is power to do. That which is willed; and farther question not”, things happen because there is a precise design upstream.

No, I have always loved to sing and singing has always been my true passion, but I didn’t like to sing when I was playing with the ball with my friends, I didn’t like being disturbed or distracted from my games, from my distractions. In every case, I would be called: “Come on, sing here, and do here!”, and then, they would calle me to sing in Church, at birthday parties, at school, everywhere. So it became like…meant to be.

The life of an artist is a gamble from the beginning; no one can be certain of succeeding in this career, so you have to have some alternatives for yourself that then can be useful for the career when you are lucky enough to succeed. So I studied a lot because this was what they wanted from me, my parents; it was the example they gave me. I had studied, and when I found myself in this career, this was undoubtedly very useful.

I heard you say once in an interview, Andrea, when you were telling people, ‘I want to be a singer’, somebody said to you, ‘Yeah, you’re good, you’re good, but nobody will pay a dollar to hear you sing.’ You remember that?

I remember, yes. My daddy told me: when people tell you good job, this means nothing; the day that they are willing to pay a ticket to come to hear you, then you can say that you are a singer.

When you look back at your amazing life so far, in your illustrious career, what are you most proud of?

The affection that I have been able to capture people’s hearts. This is surely the most important thing.

What are your hopes and your goals for the future of the foundation?

I am confident that the foundation will grow, in size, in projects, in quantity and quality of projects.

What are your, Veronica, what are your hopes and dreams for the future of the foundation?

I would say exactly the same. He stole whatever I had in my mind and, you know, I’d love to say a great many things I like, but  I can not be compared to him, so I will just say that being together, we will reach the same things. So I only will  add if it’s possible that I will continue to learn as much as I’m learning in life from this beautiful laboratory.

And you guys have a beautiful family. You’re busy all the time, heading off to the States. How’s life today during these COVID times?

Let’s say that we kept ourselves busy. Of course in the family’s been hard as with everybody else because we’ve been more lucky than others. We got the COVID but at the same time, it was not so, not bad at all.  You cannot just be, okay if the rest of the world is not. So  no matter what was happening inside the house, we tried to keep our spirit[s] up, tried to helpful with a lot of people, whoever was asking for any kind of help, with the foundation and just personally. But at the same time you cannot enjoy it, you know, if the rest of the world is not.

I read once a quote from you. You said, “Everyone has a destiny, but destiny is God.” What did you mean by that?

I do not know if I said exactly this [or] if I said exactly that. But, I think that there is some truth in this. In the sense that…whoever puts his life in the hands of the One who created it, who wanted it, that obviously desired and loved it, puts it in good hands.

Thank you, Veronica, Andrea. Thank you both so much.

Thank you very much.