Archbishop Aquila: The Eucharist can transform your life 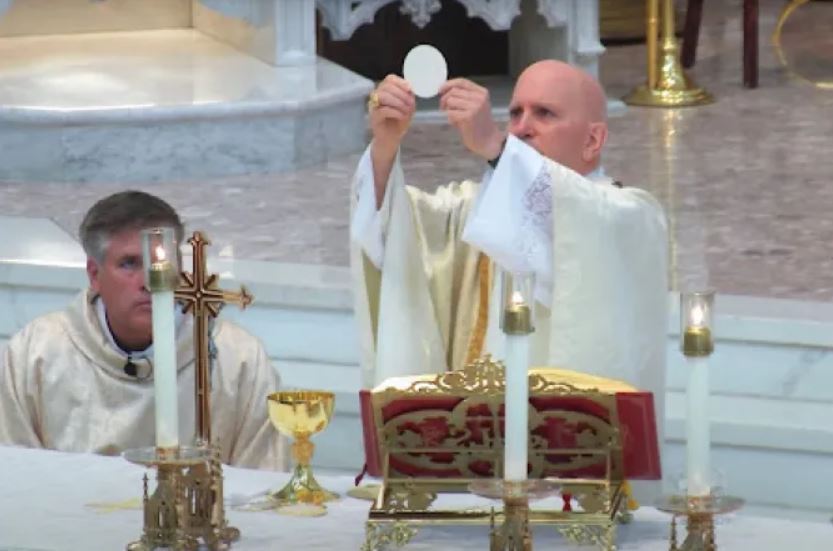 Archbishop Aquila: The Eucharist can transform your life

Archbishop Samuel Aquila celebrates Mass at the Cathedral Basilica of the Immaculate Conception in Denver, Colo., on May 24, 2020. / Screenshot from Archdiocese of Denver

The archbishop of Denver criticized media coverage that frames the bishops’ discussion on the Eucharist as a debate over whether or not President Joe Biden can receive Holy Communion.

The secular media, Archbishop Samuel Aquila told CNA during the U.S. bishops’ annual fall meeting in Baltimore on Tuesday, “are trying to make it a battle.”

The archbishop’s comments came in advance of Wednesday’s much-anticipated vote by the United States Conference of Catholic Bishops (USCCB) on a new document highlighting Church teaching on the Eucharist and its role in the life of the Church. Yet as the USCCB’s website explains, there will be “no national policy on withholding Communion from politicians.”

Instead, Aquila explained, the aim is “to present a clear understanding of the Church’s teachings to bring heightened awareness among the faithful of how the Eucharist can transform our lives and bring us closer to our creator and the life he wants for us.”

President Biden, the second Catholic president in U.S. history, positions himself as a “devout Catholic” while supporting the expansion of abortion, which is considered a grave evil by the Catholic Church.

“All of us understand that you have to be pastoral in dealing with these situations and that it is really important to have a dialogue with the person, for us as bishops,” Aquila said. “To speak with those who are in public life, no matter where they are in public life. That the positions they take influence those within the Catholic Church and can be a real scandal to those faithful who adhere to the teachings of the Church and the dignity of the human person.”

The Catechism of the Catholic Church, which summarizes Church teaching, recognizes the inherent dignity and worth of the unborn human person and considers abortion a “crime against human life.”

“Human life must be respected and protected absolutely from the moment of conception,” the catechism reads. “From the first moment of his existence, a human being must be recognized as having the rights of a person — among which is the inviolable right of every innocent being to life.”

According to Aquila, “the impact of one abortion is tremendous.”

“A unique human being is wiped out, as Pope Francis says, it’s murder,” he said. “And we have to help people to understand that and to see how it undermines all of society and also it changes the course of history.”

He shared a question he asks to demonstrate the consequences of one abortion.

“People don’t think of it in those terms, let alone just the uniqueness and the dignity of human life,” he concluded. “But it is a gift that we have to protect and have a responsibility to protect.”

Citing the Second Vatican Council, Aquila stressed that Catholics are called to “be the light of Christ in everything we do, no matter what profession we’re in.”

He shared one thing that he wished every Catholic knew about the Eucharist.

“That when we receive the Eucharist, that we’re truly receiving the second person of the Trinity,” he began. “We’re receiving Christ himself. And that we’re called into an intimate relationship with him. And that each one of us has a unique relationship.”

He revealed a message that he shares in his preaching on the Eucharist.

“I always ask the faithful, when you return to your pew after receiving the Eucharist, don’t listen to the distractions that may be there or thinking, ‘I gotta go do this, I gotta do that,’” he said. “Really take time to praise and adore Christ, talk to Christ to bring him your concerns and pray for others and for yourself and knowing that he’s there as your friend and is the one who knows you better than you know yourself.”

Aquila described this encounter through the Eucharist as a saintlike experience.

“It’s that personal, intimate relationship that all the saints have had, and all of us are called to be saints, whether we believe it or not,” he said. “We have to stop listening to the voice of the devil, who says, ‘No, you’re not called to be a saint,’ or ‘You’ll never be a saint.’”

Instead, he said, “open your hearts to the Lord.”