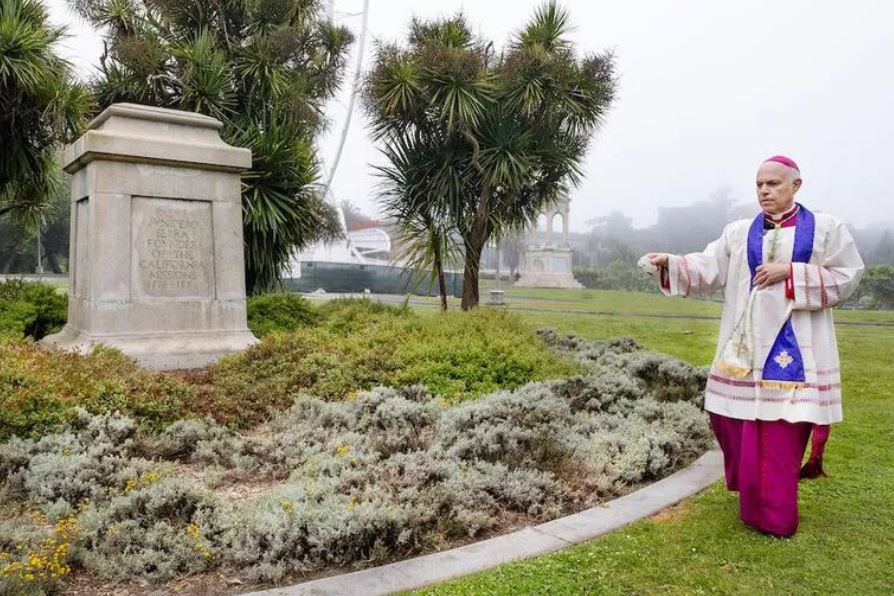 Archbishop Cordileone on Tuesday said that the Women’s Health Protection Act “is surely the type of legislation one would expect from a devout Satanist, not a devout Catholic.”

SAN FRANCISCO, Calif. — The Archbishop of San Francisco warned that an abortion bill to be voted on in Congress this week amounts to “child sacrifice.” He called on Catholics to pray and fast for the defeat of the bill.

“This proposed legislation is nothing short of child sacrifice,” Archbishop Salvatore Cordileone said in a Tuesday statement regarding the Women’s Health Protection Act (H.R. 3755).

The bill, introduced by Rep. Judy Chu, D-Calif., recognizes the “statutory right” of women to have abortions. It also states the “right” of doctors, certified nurse-midwives, nurse practitioners and doctor’s assistants to perform abortions. It prohibits many limitations on abortion, such as state pro-life laws requiring ultrasounds or waiting periods before abortions.

“Any reasonable person with a basic sense of morality and inkling of decency cannot but shudder in horror at such a heinous evil being codified in law,” Archbishop Cordileone said.

The bill overrides prohibitions on “pre-viability” abortions, and would also allow for late-term abortions without “meaningful” limits, the U.S. bishops’ conference has warned, calling it “the most radical abortion bill of all time.” The bill is scheduled to be considered by the House this week.

“This deceptively-named, extreme bill would impose abortion on demand nationwide at any stage of pregnancy through federal statute,” wrote Archbishop Joseph Naumann, chair of the U.S. bishops’ pro-life committee, in a Sept. 15 letter to members of Congress.

“It would force all Americans to support abortions here and abroad with their tax dollars,” he added, and “would also likely force health care providers and professionals to perform, assist in, and/or refer for abortion against their deeply-held beliefs, as well as force employers and insurers to cover or pay for abortion.”

Archbishop Cordileone on Tuesday said the bill “shows to what radical extremes the supposedly ‘Pro-Choice’ advocates in our country will go to protect what they hold most sacred: the right to kill innocent human beings in the womb.”

He expressed support for Archbishop Naumann’s warning about the bill, and advocated for members of Congress to instead pass legislation supporting both mothers and children.

Archbishop Cordileone called it “especially shameful that any self-professed Catholic would be implicated in such an evil, let alone advocate for it.”

House Speaker Nancy Pelosi, D-Calif., a Catholic who resides in the San Francisco archdiocese, announced the House vote on the bill earlier this month after a Texas pro-life law went into effect restricting most abortions after detection of a fetal heartbeat. She vowed to “enshrine into law reproductive health care for all women across America.”

Archbishop Cordileone on Tuesday said that the Women’s Health Protection Act “is surely the type of legislation one would expect from a devout Satanist, not a devout Catholic.”

He concluded with a call for “all Catholics in our country immediately to pray and fast for members of Congress to do the right thing and keep this atrocity from being enacted in the law.”

“A child is not an object to be thrown away, and neither is a mother’s heart,” he said. “I’ve said it before and I’ll say it again: the answer to a woman in a crisis pregnancy is not violence but love. This is America. We can do better.”

What Really Happened at the Euchar...

What I Saw When I Went to a Tradit...