Archbishop Gänswein to Catholic journalists: Be brave like Mother Angelica 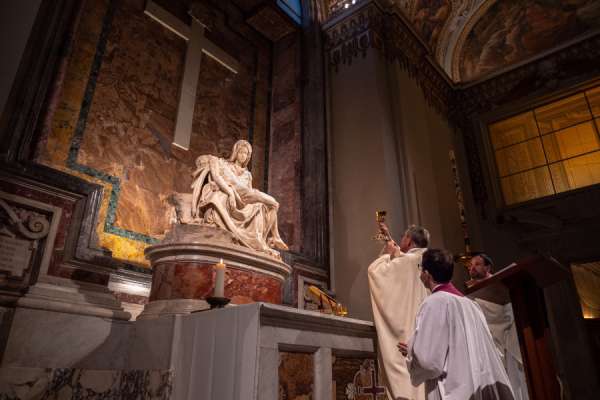 Archbishop Gänswein to Catholic journalists: Be brave like Mother Angelica

Preaching at a Mass in St. Peter’s Basilica Jan. 4, the personal secretary to Benedict XVI also encouraged those working in Catholic media to convey “the essence of the Christian message” in the spirit of Renaissance artist Michelangelo.

“In doing so, imitate Mother Angelica and Michelangelo. Be brave like Mother Angelica! And reach for the stars like Michelangelo,” Gänswein said, according to CNA Deutsch, CNA’s German-language news partner, which published the full text of the archbishop’s homily.

Mother Angelica began broadcasting from a converted garage in Birmingham, Alabama, in 1981. By the time of her death in 2016, EWTN had become the largest religious media network in the world.

The Mass, attended by EWTN employees, took place in the Chapel of the Pietà, which houses Michelangelo’s celebrated sculpture of Mary cradling Jesus Christ after the Crucifixion. The artist carved the image out of Carrara marble in 1498–1499, when he was 24 years old. It is the only artwork he ever signed.

Referring to the Pietà, Gänswein said: “The creative act of the sculptor is the removal of everything unnecessary, as we see here. In this respect, sculptors are particularly similar to God, who often only takes away the unnecessary in order to create something new.”

“Michelangelo also removed everything superfluous from the marble block from Carrara, in which this sculpture had been hidden for millions of years. In this sense, this marvel just had to be freed. It was, so to speak, the invisible essence in this raw marble block that Michelangelo recognized and exposed with his genius.”

“Finally, I can and will recommend this technique to you as Catholic media people.”

The 64-year-old archbishop told a German magazine last month that he was “grateful to God that 2020 was over.”

Gänswein, from the Black Forest region of Germany, is prefect of the Papal Household, but has been on leave from his duties as prefect since February in order to be able to dedicate his time exclusively to the former pope as Benedict XVI’s private secretary.

Following treatment for kidney problems in September, Gänswein told the magazine Bunte that he had had a “clarifying, very fortifying and encouraging meeting with Pope Francis” about his removal from active duty as prefect, which he stressed he knew was not a “punishment.”

Gänswein celebrated Christmas and the New Year with the Pope Emeritus at the Mater Ecclesiae Monastery in the Vatican Gardens, where the two men and four Italian nuns reside.

In his homily on Monday, the archbishop urged journalists to imitate Michelangelo’s approach to sculpture by omitting “everything unnecessary in your reporting that all media report on anyway.”

“Instead, keep getting to the essence of the Christian message and make it as free as the young Michelangelo, without any competition,” he said.

“Because in all news on Earth — about all tragedies, catastrophes, wars or pandemics — the most important essence is always the good news of the Incarnation of God in Jesus Christ.”

“It is precisely this message that we see here before us. Therefore, never cease to tell about it above all and to expose the beauty of this news to the best of your ability.”