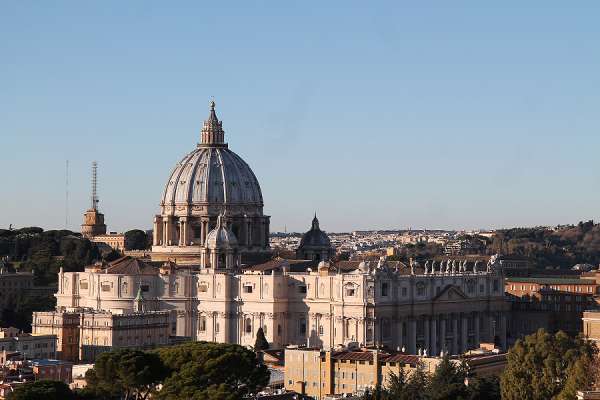 On Jan. 16, Paolo Ruffini, prefect of the Dicastery of Communications, held a private audience with Pope Francis. Although nothing transpired publicly from the meeting, the Italian newspaper La Verità and the political web portal Dagospia – a sort of Italian Drudge Report – reported that the pope was “unhappy” with the poor coverage the Vatican Dicastery of Communications gave to Pope Francis’ latest slate of interviews.

On Jan. 18, La Verità also published a leaked memo from a Vatican News official surprisingly instructing coworkers not to share on social media the pope’s interview with the Italian private television station Canale 5.

The unusual memo was signed by Alessandro de Carolis, a veteran journalist at Vatican Radio. De Carolis is not an editor nor a director in the Vatican media; thus the speculation that the decision to gag the interview could not have come from him, but from higher authorities at the dicastery.

According to La Verità, the Pope was unhappy with his interview on Canale 5 not being more widely promoted by the Vatican social media platforms. The Vatican has 4.3 million followers on Facebook, more than half a million on Instagram and some 800,000 on Twitter.

The interview with Canale 5 was reportedly organized directly by Pope Francis, without the intervention of any official from the Dicastery of Communications. And it was the last of three consecutive “pop” interviews by Pope Francis. The pope granted an interview to the famous Italian sports newspaper La Gazzetta Dello Sport on Jan. 2; penned a reflection for the Italian edition of Vanity Fair on Jan. 6; and finally sat down with the Canale 5 journalist Fabio Marchese Ragona on Jan. 10.

The piece in Vanity Fair was coordinated by the Dicastery of Communications. The issue of the magazine containing the pope’s text also presented an op-ed by Andrea Tornielli, editorial director of the dicastery.

But the other two were not coordinated by the dicastery. Fr. Marco Pozza, an Italian priest and journalist, arranged the interview with La Gazzetta Dello Sport. In a phone call to the Gazzetta office the day after the publication, Pope Francis thanked him for setting it up.

Fr. Pozza is a rising star in Italian media, and his name is the one that pops up frequently as the possible new head of the dicastery.

Pozza, 41, is the chaplain of the Padua Correctional Facility. The prisoners he ministers to are the ones that wrote the meditations for the Easter 2020 Way of the Cross at the Colosseum.

Pozza has been involved in three television series with Pope Francis, on the Our Father, the Hail Mary, and the Creed respectively. The series were aired by TV 2000, the television station of the Italian Bishops Conference, and all of them were turned into books. In addition, he has prepared a series of interviews with Pope Francis about “Vices and Virtues” that will be aired on a commercial TV station.

Early in his priesthood, Fr. Pozza became well-known for going to bars to have discussions with young people over drinks, which won him the nickname of “Fr. Spritz,” after a popular Italian aperitif cocktail. He later appeared on a popular Italian TV show, becoming a media personality.

The priest landed on Pope Francis’ radar in 2016, the Sunday of the Jubilee of Prisoners during the Special Holy Year of Mercy, when the pontiff received him and the inmates for a private meeting at Domus Sanctae Marthae.

Observers think that replacing Ruffini, if it happens, will not be easy. Ruffini took the helm of the Vatican Dicastery for Communication in July 2018, becoming the first layperson to head a crucial Vatican dicastery. He took the job in a challenging moment, following the so-called Lettergate scandal – in which a letter of Benedict XVI was doctored and blurred before being sent to media, so as to change the implications of its contents. The scandal led to the resignation of Mons. Dario Edoardo Viganò, the former prefect.

Ruffini was able to normalize the Vatican communication dicastery situation and carry forward communication reform. As the prefect, he also managed communications for the 2018 Synod on Young People and the 2019 Special Synod for the Pan-Amazonian region.

Ruffini also handled a significant transition following the December 2018 resignations of Greg Burke and Paloma Garcia Ovejero, director and deputy director of the Holy See Press Office. For some six months, Alessandro Gisotti became the interim director. He was later appointed deputy editorial director of the Dicastery for Communication, and Matteo Bruni was appointed at the helm of the Holy See Press office in July 2019.

The Jan. 16 audience with Ruffini, which happened right after the Pope’s interview with Canale 5, fueled the speculations regarding Ruffini’s future. Ruffini is viewed as a good administrator, but Pope Francis seems to be looking more for a spokesperson. Pozza, who now enjoys the papal trust and confidence, might be the one.