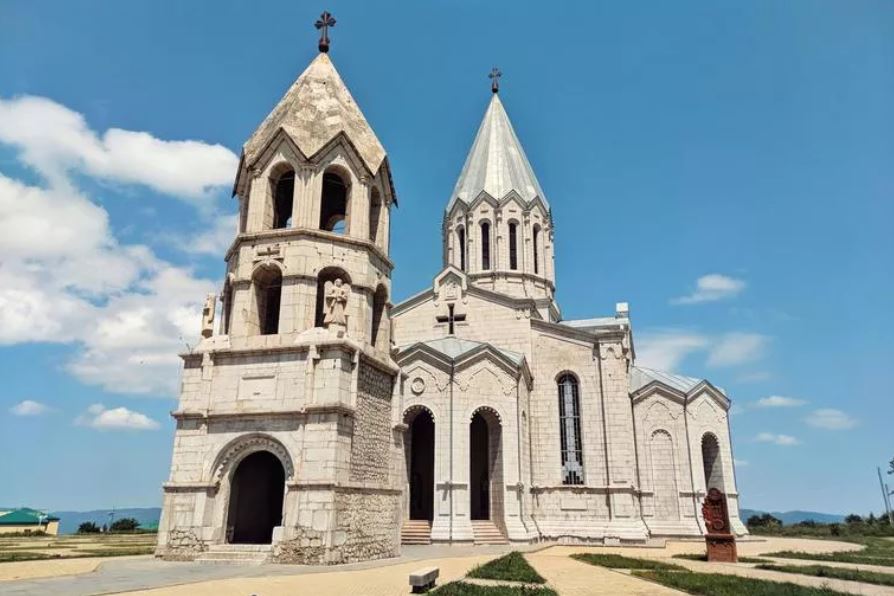 Exclusive testimony of Father Andreas Taadyan, rector of the Armenian Apostolic Cathedral of Shusha, who was forced to leave his church and hometown in the midst of the recent conflict between his country and Azerbaijan.

STEPANAKERT, Armenia  — By virtue of the Nov. 9 cease-fire deal, signed after six weeks of deadly clashes, Azerbaijan has taken back control from Armenia of a very large part of the long-disputed territory of Nagorno-Karabakh.

This agreement, negotiated under the direction of Russia and very unfavorable to Armenia, was reached after Azerbaijan recaptured several territories of the region, including the strategically important city of Shusha, located 10 miles away from the capital of Nagorno-Karabakh, Stepanakert. Shusha, a cultural center of the region, houses one of the largest Armenian Orthodox churches of the world, the Holy Savior Cathedral — which was heavily damaged by a rocket on Oct. 8 — as well as three other churches and a monastic convent.

While ethnicity and regional geopolitical factors are central to the Azerbaijan-Armenia conflict, it also has an inescapable religious dimension, as Azerbaijan’s residents are almost exclusively Muslim, whereas Armenia’s citizens are overwhelmingly Christian, with more than 90% of them belonging to the Armenian Apostolic Church.

At the end of a tormented 2020 and with the approach of Orthodox Christmas on Jan. 7, the Register interviewed the rector of the iconic Cathedral of Shusha, Father Andreas Taadyan, who had to flee his church and hometown together with tens of thousands of his Armenian compatriots living in the territories ceded to Azerbaijan. The interview was conducted in collaboration with the humanitarian association SOS Chrétiens d’Orient (which recently opened a mission in Nagorno-Karabakh to help displaced Christian populations), whose volunteers in Stepanakert provided a translation of Father Andreas’ answers from Armenian to French.

Currently a refugee in Stepanakert,  which is still under Armenian control, Father Andreas is providing support to the numerous displaced families and helping reorganize the life of the different communities in this new context.

What is the situation in Shusha, in the aftermath of the Nov. 9 cease-fire? Do you fear for the city and its religious and cultural monuments?

Shusha is still in the hands of the Azerbaijanis. According to our correspondents, the situation there is deteriorating every day. In particular, I am told they are destroying houses, Armenian shrines and our cultural heritage. I believe that if the situation continues like this, there will be no traces of Armenians left there. They will find something to destroy every day. I don’t think they are going to preserve or renovate Christian monuments, like we did when we renovated the city’s mosque. Indeed, if they decided to destroy the Armenian nation, they would destroy the monuments for good.

The Azerbaijani authorities committed themselves not to damage the historic monastery of Dadivank, located in the Shahumyan region and currently under Russian protection, nor its artistic heritage.

We have been trying, indeed, to preserve the Monastery of Dadivank. We managed to protect it thanks to the negotiations that His Holiness [Editor’s note: Karekin II, the Catholicos of all Armenians] conducted. The Monastery of Dadivank is the only monument to be guarded by Russian peace forces. A few days ago, we visited it with armored vehicles, as the place is surrounded by Azerbaijanis. I am afraid that, unfortunately, the terrorists will sooner or later destroy all other monuments on that territory, like the church of Tsitsernavank or that of the Hadrut province.

What about your church in Shusha, which was partly destroyed by the Azerbaijani bombing?

We actually saw the explosion of the Church of St. John the Baptist, the other church of the city, after the capture of Shusha. I don’t think the cathedral will remain intact. I think it will be destroyed over the years.

Why is Shusha called Nagorno-Karabakh’s Jerusalem?

In the past, and until 1920, there used to be many churches in Shusha. It was called the city of culture, especially because 12 newspapers were created there. People lived a full and prosperous life there. There were three or four priests for each church. The city was like Jerusalem for the number of churches and priests.

When Azerbaijan took over, in March 1920, almost all of them were destroyed and burned down. During the Soviet years, two churches remained, and they were partially destroyed. We renovated them afterwards, and the nickname of Jerusalem remained associated with the city, because as long as there were no churches open in Stepanakert [the capital of the Republic of Artsakh], the bells of our churches rang for the neighboring cities, as well. We also call Shusha “Mount Tabor,” the Mountain of the Transfiguration of Christ, because, there, our white church is intensely illuminated.

Can there still be a future for Christians in Artsakh?

The people of Artsakh are always optimistic about their future. We all hope that tomorrow will be better than today. So, we go on with our lives, hoping for better days. I think that God will not leave us alone; everything will be fine, eventually. At the moment we are surrounded by Azerbaijanis, so there is a physical danger for all of us, but everything is in God’s hands.

Are you still waiting for an intervention from the international community, which remained most of the time neutral during the war? What are your expectations?

All Armenians have come forward to demand the recognition of the Artsakh Republic. Today, there are glimmers of hope coming from the French Republic, as the Parliament recently approved a resolution for recognition. At least, we have not lost hope that Artsakh will be liberated one day. We would be very grateful to the world, but for the moment, I couldn’t say more.

How is your new daily life in Stepanakert?

We left the church and all our properties, houses, everything in Shusha, and we are in Stepanakert with our clothes only. Our daily life is going quite well: We continue to serve the people, we continue to celebrate Mass in the city’s church, and we are organizing the life of churches in the rest of Artsakh. We are trying to help our brothers because almost all the towns and shrines are on the border of the territory controlled by Azerbaijan. We are trying to help our compatriots who fled Nagorno Karabakh to Yerevan [the capital of Armenia] during the war, so that they can come back, especially those who have financial, economic and social issues. We try to be helpful, at least through our advice and services here.

What are the main difficulties you and your people are facing?

We have lost large areas, villages, cities — and most of the population is homeless today. They don’t have a place to live, and many of them are trying to go to Yerevan, which is quieter than Stepanakert, because there is no peace in the border towns and villages. People are in permanent danger; the Azerbaijanis often enter the border villages, trying to steal animals to terrorize people. Our government and army must secure these places so that our people can be truly safe.

We know that many families chose to return home despite the danger, but many of them don’t want to bring their children along because the place is not safe yet. So, now, we are registering the homeless at the municipality, working with them so that we can do our best to help them, first of all families with many children. That’s what is planned at the moment.

What are your plans for the future?

I will stay in Artsakh to serve wherever I am sent. But I hope to return to Shusha one day.

Would you like to say something to the Armenian faithful in these challenging times, especially at the approach of Orthodox Christmas (Jan. 7), as many of them will celebrate it far away from their home?

This Nagorno Karabakh issue is not over yet; there are still events to come. Life goes on, and we will have to keep fighting the good fight. We will have to face this situation, but with the hope that tomorrow will be ours again and that we will live in peace and freedom. I advise people not to panic, to keep praying, not to ever lose hope, to be optimistic, and to continue to live on this small land. We can still live here and prosper.

Is Islam a Religion of Peace, or o...