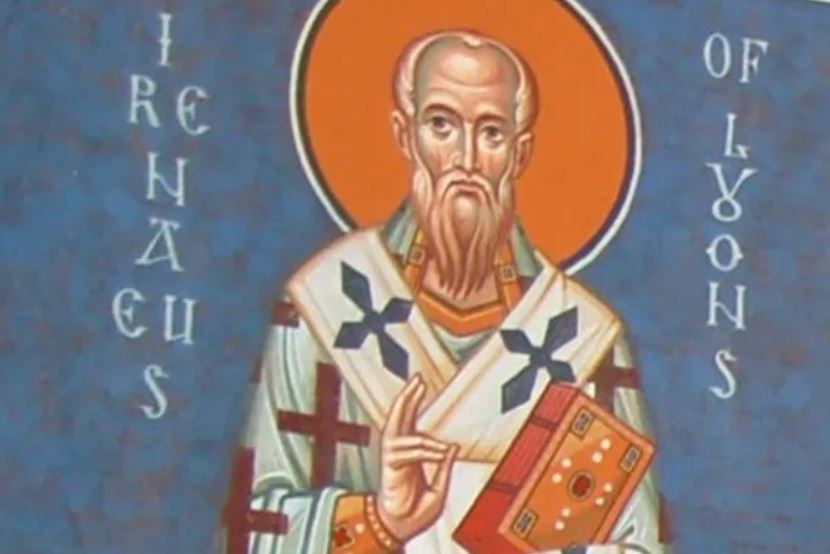 St. Irenaeus once helped to save the 2nd-century Church from schism. Today, the newly declared “Doctor of Unity” is the patron saint of a group of theologians working on current problems in Orthodox-Catholic dialogue.

According to the St. Irenaeus Joint Orthodox-Catholic Working Group, the newest Doctor of the Church understood that “diversity in practice does not imply disunity of faith.”

During the “Paschal Controversy” in the 2nd century, Irenaeus played a decisive role in mediating the dispute over the date of Easter.

Two principal traditions existed in the early Church at the time. In much of Asia Minor, Easter was celebrated on the 14th Nisan (the Jewish Passover), an observance known as Quartodecimanism. But in Rome and much of the East, the feast fell on a given Sunday — a divergence that also had implications for fasting practices.

When Irenaeus was serving as a presbyter in Lyons, in modern-day France, he was sent to Rome in 177 to mediate a resolution to the controversy.

The saint “successfully intervened with Pope Victor to lift the excommunication of the Quartodecimans and thus avert a schism,” the Irenaeus group told CNA on Jan. 23.

The 26 Catholic and Orthodox theologians who make up the St. Irenaeus Joint Orthodox-Catholic Working Group discussed Irenaeus’ role in the Paschal Controversy during its most recent meeting in Rome.

It was during this meeting that Pope Francis first revealed that he planned to name Irenaeus the 37th Doctor of the Church with the title “Doctor of Unity.”

The pope made this official on Jan. 21 with a decree signed during the Week of Prayer for Christian Unity.

Following the decree’s promulgation, the St. Irenaeus Joint Orthodox-Catholic Working Group told CNA why Irenaeus was an apt choice for the title “Doctor of Unity.”

“As a native of Asia Minor who eventually became a bishop in the West, Irenaeus in his person reflects the close interconnection between East and West in the early Church,” the group told CNA.

“His writings address critical issues such as the ‘rule of faith,’ apostolic succession, the canon of scripture, all of which are key elements of the faith held in common by Catholics and Orthodox.”

The group has met annually since 2004, alternating between Catholic and Orthodox majority countries, including Italy, Russia, France, Romania, Austria, and Greece.

In line with the joint working group’s style, its responses to CNA’s questions were co-written by a Catholic and an Orthodox representative of the group and then approved by both of its co-secretaries: Assaad Elias Kattan, chair for Orthodox Theology at the University of Münster, and Johannes Oeldemann, the Catholic director of the Johann Adam Möhler Institute for Ecumenism.

“Irenaeus has left us a magnificent theological legacy written in a way particularly dear to the Orthodox, because it integrates intellectual and spiritual motifs, and at the same time so cherished in the West that his main writings have been preserved in Latin,” the group said.

With the new papal decree, Irenaeus became the first saint to hold both the titles of martyr and Doctor of the Church.

In the wake of the decree, some have raised the question of whether there is historical proof that Irenaeus was truly a martyr.

The St. Irenaeus Joint Orthodox-Catholic Working Group, however, explained why it holds that Irenaeus should have both titles.

“Though he is venerated as a martyr by both Catholics and Orthodox, there is little information about the actual manner of his death,” it said.

“However, martyrdom is not only measured by factual suffering, but also by a love expressing that eagerness to go through whatever God allows to happen. Irenaeus, in this sense, was at least a martyr of desire.”

“Moreover, in his influential writings, he was a powerful witness (‘mártys’ in Greek) to Christian faith, certainly deserving the title of martyr and ‘Doctor of Unity.’”

Cardinal Kurt Koch, the president of the Pontifical Council for Promoting Christian Unity, has welcomed the St. Irenaeus Joint Orthodox-Catholic Working Group’s work over the past 18 years as a valuable support for the international Roman Catholic-Orthodox dialogue.

The group’s next meeting will be held in Romania in October 2022.

“The teaching of this saintly pastor and teacher is like a bridge between East and West: this is why we call him a Doctor of Unity, Doctor Unitatis,” Pope Francis said in his Angelus address on Jan. 23.

“May the Lord grant us, through his intercession, to work together for the full unity of Christians.”