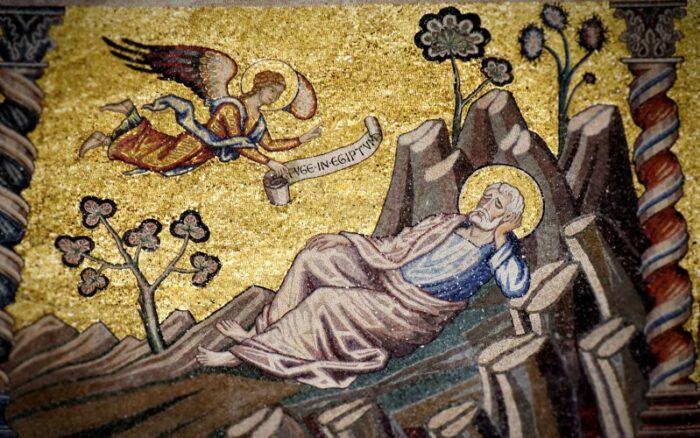 The little-known ‘Sleeping St. Joseph’ devotion that was previously prevalent amongst South American and Filipino Catholics has suddenly been propagated worldwide.

Hundreds in many countries all over the world are now obtaining statues of a sleeping St Joseph and placing their personal intentions under the statue.

They trust that St. Joseph will present their requests to the Lord in his dreams.

The Sleeping St. Joseph Devotion and its Origins

Just as God communicated to St Joseph in his dreams over 2,000 years ago, this devotion allows us to ask St. Joseph to ‘sleep’ on our petitions–to dream of them and offer them up to Christ.

In turn, we pray for discernment in following God’s will as St. Joseph once did.

For St. Joseph, to whom God entrusted the paramount role of earthly guardian of the Holy Family of Nazareth, his dreams allowed him to discern God’s will and act accordingly.

It was a special form of prayer that allowed St. Joseph to turn to God in times of peril, and surrender wholeheartedly to God’s Divine Plan.

This first occurred when the Angel of the Lord appeared to St Joseph in a dream after he discovered that Mary was pregnant. The angel told St. Joseph not to be afraid to take the Virgin Mary as his wife, for the child conceived in her was from the Holy Spirit (Mat. 1:20).

The Angel of the Lord also appeared to St. Joseph in a dream, warning him to take Jesus and the Virgin Mary to Egypt to escape King Herod (Matt. 2:13), and again telling him to take the Holy Family back to Nazareth (Matt. 2:19-23).

St. Joseph obeyed the Word of God on all occasions in silence and through prompt action. Like St. Joseph, how can we hear God’s voice in our own lives? How can we awaken to, accept, and act on God’s Will for us?

Pope Francis has always promoted the Sleeping St Joseph devotion. On January 16, 2015 during his Philippines visit, he said:

“Joseph’s rest revealed God’s will to him. In this moment of rest in the Lord, as we pause from our many daily obligations and activities, God is also speaking to us.”

“I would like to tell you something very personal. I like St. Joseph very much. He is a strong man of silence. On my desk I have a statue of St Joseph sleeping.

“While sleeping, he looks after the Church.  Yes, he can do it!  We know that. When I have a problem or a difficulty, I write on a piece of paper and I put it under his statue so he can dream about it. This means please pray to St Joseph for this problem.”

The Time of St Joseph

Many devout Catholics now seek our spiritual father’s powerful intercession, not only in the Year of St. Joseph, but also in today’s spiritual battle, given his role as protector and defender of the Church.

“Without exaggeration, the Church has done more to promote St. Joseph in the last 150 years than in the previous 1800 years of Christianity! But why now? Why St. Joseph?” (p. 4)

As we witness vicious assaults on the Church and morality, it comes as no surprise that St Joseph, the Sleeping Giant and Patron of the Universal Church, has been awakened.

Fr. Calloway explains that we need the spiritual fatherhood of St. Joseph to protect marriage and the family unit, which have been heavily undermined. The mass scale of attacks on the meaning of marriage, masculinity, femininity, the unborn, and the sacredness of human life have never been witnessed in human history.

It is now time to call upon St. Joseph, Terror of Demons, to come to our refuge and help us fight against the forces of evil.

It is also time to identify the dangers threatening our Church, so that like St. Joseph, who took the Virgin Mary and Jesus to Egypt to protect them from King Herod’s wrath, we too can defend the Church and her teachings from malicious attacks.

Just like St. Joseph was met with closed doors while searching Bethlehem’s streets for Christ’s birthplace, many today close their hearts to the fullness of truth and God’s will.

It is time to call upon St Joseph to open the hearts of individuals; that Christ may be embraced and born in our hearts.  As Fr. Calloway states, “Saint Joseph was the first missionary. Today, he desires again to bring Jesus to the nations.” (p. 4)

Other devotions include the 30-Day Holy Cloak of St. Joseph Novena, the 33-Day Consecration to St Joseph, the Litany of St Joseph and the Chaplet of St. Joseph.

As St. Teresa of Jesus of Avila wrote in her autobiography:

“There are many saints to whom God has given the power to assist us in the necessities of life, but the power given to St. Joseph is unlimited: It extends to all our needs, and all those who invoke him with confidence are sure to be heard.”

In times of tribulation, confusion, or when simply trying to hear God’s voice, let us call upon St. Joseph, the silent but strong defender of the Universal Church. The man of heavenly dreams.

The powerful saint has awoken from his slumber to shake our faithless world and open hearts to the truth.

St. Joseph, pray for us!