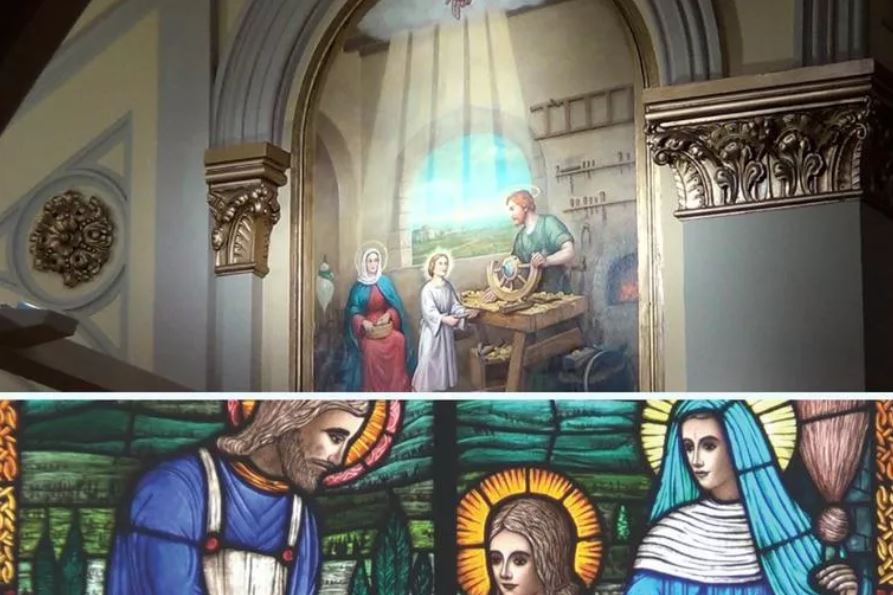 A half-century after the Battles of Lexington and Concord, and 17 miles from these first military battles of the American Revolution, Lowell, Massachusetts, became the birthplace of the American Industrial Revolution. Situated at the confluence of the Concord and Merrimack Rivers, Lowell was actually designed and built to be the first industrial town once the water power of these two rivers was harnessed and channeled through more than 5 miles of canals to power the brand-new textile mills swiftly springing up.

Laborers poured into the burgeoning city to work in the largest concentration of mills in the United States, which by 1888 typically rolled out more than four million yards of cloth weekly. Soon, more than 21,000 men, women and children toiled to keep the mills humming. Cascades of immigrants filled these ranks in Lowell. And they found spiritual refuge at St. Joseph the Worker Church.

In a sense, St. Joseph’s had already been a shrine in pectore from the 19th century, when it was originally St. Joseph Church, a parish specifically founded in May 1868 to serve the Franco-Americans recruited in their native Quebec to work in the mills. The devout immigrants needed French-speaking priests. By invitation, the Oblates of Mary Immaculate in Montreal came to form this parish for the workers. Within two weeks of their arrival, the new pastor purchased an existing stone Gothic church that had been constructed in 1850 and was for sale. He dedicated it to St. Joseph, the model and patron of all workers, at the first Mass celebrated on May 3, 1868.

By 1881, as Canadians continued to stream into “The Spindle City” to staff the mills, the church needed two additions to hold the ever-growing congregation. After the turn of the century, the mills started to be phased out into the 1920s and then began to close, yet remaining workers still attended St. Joseph’s. By the mid-20th century, most parishioner-workers, along with the mills, were gone.

Despite and through all the changes, the Oblates of Mary Immaculate remained a strong presence. When the church was revitalized as a shrine, the Oblates continued as guardians, remaining to this day. This move to turn the church into a shrine came after Venerable Pope Pius XII instituted St. Joseph the Worker as a liturgical feast for May 1 in 1955. The church, which had already existed to serve the workers for so many decades, was dedicated as a shrine on May 10, 1956, the feast of the Ascension, by Archbishop Richard Cushing of Boston. He would be created a cardinal two years later.

At the shrine’s dedication, Archbishop Cushing urged “the working people of Lowell to send … petitions to St. Joseph. A greater saint you couldn’t have. We don’t know a word he ever spoke or wrote, yet, next to Mary, Mother of God, he is the greatest saint.” Reminders of St. Joseph’s unique relationship with Jesus and Mary as the head of the Holy Family and as the model of working people can be found everywhere in the shrine’s beautiful interior. Even from outside, high in a niche above the main entrance, a larger-than-life statue of St. Joseph greets those who enter. The head of the Holy Family continues as a strong presence in the shrine’s interior, too.

Major renovations were carried out before the turn of the millennium, but preceding them in the early 1960s were the installations of 11 tall windows of bright, antique-colored stained glass designed to present the saint’s life and attributes. The shrine’s first director, Oblate Father Andre Garin, developed the theme.

The windows begin with the Marriage of Joseph and Mary, then continue to unfold in story-like fashion in biblical chronological order, from the Nativity through the Finding of Jesus in the Temple. One subject rarely seen is the angel’s annunciation to St. Joseph, who is shown in a window peacefully asleep. Medallions at the bottom of the window show a carpenter’s square and slide rule. A medallion at the top represents the Trinity, predominate with the Holy Spirit, who chose Joseph to be Mary’s husband and earthly father of Jesus.

Most all these windows show a young, strong Joseph, ready to care for his family and then carrying that care out, such as in the Flight to Egypt and working in the shop in Nazareth. There, the Child Jesus is pictured wearing a red tunic and watching intently as Joseph, depicted as dressed in a blue shirt and white worker’s apron, shows him the fine points of using a carpenter’s tool, while Mary, shown in blue and white garments, is portrayed as closely watching and admiring her husband teaching her son. This series of windows also includes one of Jesus blessing the dying Joseph with Mary by his side. One window brings the events into the 20th century, commemorating the Holy Family’s appearance during the “Miracle of the Sun” at Fatima.

Another window presents the glorified St. Joseph as the Protector of the Universal Church. Rays from the Holy Spirit go to the depicted image of Joseph, as rays from his hands extend to four churches — St. Peter’s Basilica, his shrine, a local Greek Orthodox church, and a Protestant church. This window was done when the Second Vatican Council was formulating the document on ecumenism. “Work was the daily expression of love in the life of the Holy Family of Nazareth,” wrote Pope St. John Paul II in his apostolic exhortation Redemptoris Custos (Guardian of the Redeemer). “If the Family of Nazareth is an example and model for human families, in the order of salvation and holiness, so too, by analogy, is Jesus’ work at the side of Joseph the carpenter.” To bring this “sanctification of daily life” close to St. Joseph, the stained-glass windows also have pairs of medallions at the bottom symbolizing trades and professions found in Lowell. Several original stained-glass windows date to 1881 as reminders of the shrine’s origins as a parish. From high in the apse, they picture St. Joseph with the Child Jesus in the center, flanked by windows honoring Our Lady of Lourdes, St. Anne, St. John the Baptist and a guardian angel.

These five windows also reflect the strong devotions held in the 19th-century parish, from St. Joseph to Our Lady of Lourdes, revealing parishioners’ devotion to Mary in this title after she appeared in 1858, only 23 years earlier than this window. The continuity between new and old — spiritual and artistic — can be seen in the large paintings framed by arches and seen above the side altars. There is the Marriage of Joseph and Mary, a copy of the famous one painted by Raphael in 1504. This reproduction from the 1880s appears above the St. Joseph altar. On the opposite side altar, the painting dates to 1960 and presents St. Joseph the Worker as young and strong. He is shown working on crafting a cart wheel as Jesus hands him a spoke while Mary sits by a spinning wheel and lovingly watches them. Above them, the hand of God the Father comes out of a cloud with rays of blessings on the family and their work. Elsewhere, a similar styled painting pictures the Resurrected Lord outside the tomb.

The St. Joseph side altar presents the Carpenter of Nazareth wearing a workman’s apron and holding a saw in one hand and plane in the other, ready for work.

Along both sides of the nave, like an honor guard, restored life-size statues of many saints join the Sacred Heart and Our Lady of Lourdes — including Patrick, Lucy, Anthony, Michael, Thérèse of Lisieux and Peregrine. The glass eyes of these statues add a “real” appearance.

While during this time the shrine is not open its usual amount of hours, Oblate Father Michael Amesse, the shrine director, explained that three Masses continue daily, as do confessions three hours a day, six days a week. This May 1, the feast of St. Joseph the Worker, is a banner day for the shrine. Father Amesse said that Boston’s Cardinal Seán O’Malley will lead a procession with St. Joseph’s statue around the local streets, stopping to bless those workers in the area, such as police and firefighters.

The connection of past to present at this shrine-church is the honor given to the greatest of saints after Our Lady, St. Joseph.