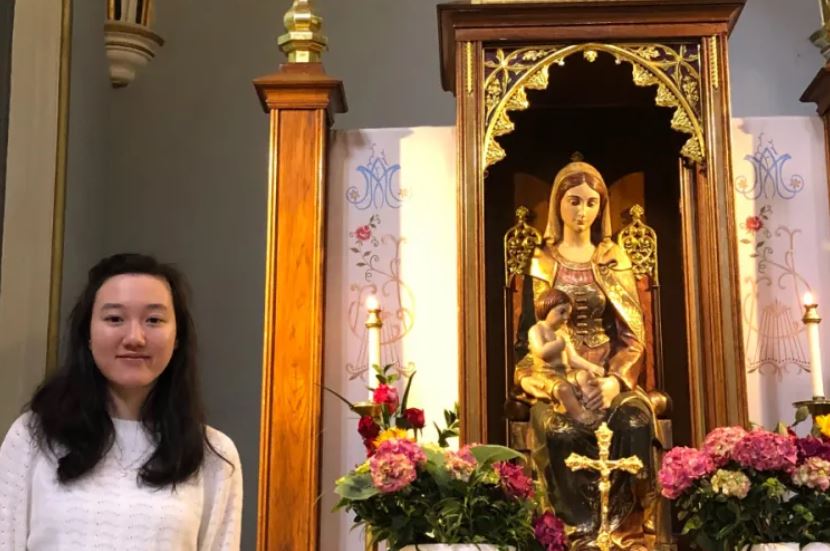 Emma Larson, who became Catholic after hearing a perfomance of the Ave Maria, at Holy Rosary Cathedral in Vancouver. Credit: The B.C. Catholic.

Though she could not comprehend the Latin, something about a powerful, building song the Chor Leoni Men’s Choir performed at a Christmas concert two years ago captured Emma Larson’s full attention.

Even after the show was long over and Larson had left the Orpheum theatre in Vancouver, that single composition continued playing in her mind. It was the Ave Maria.

“I had no idea what that meant, but in that moment, ever since I heard it, it stuck in my head.”

A day later she did an internet search for “Ave Maria.” She learned it meant “Hail Mary.”

Having grown up in a music-loving but non-religious home, Larson had no idea what the Hail Mary was and knew little about Catholicism. But the stirring in her heart made her want to hear the song again, and she was soon looking up various versions online.

She discovered a second Catholic hymn: Ave Maris Stella. “That’s when I just couldn’t get enough. It was just so beautiful. After hearing that one, I started looking more into Catholicism. What was this about? Why was this music so beautiful?”

The COVID-19 pandemic set in not long after that remarkable concert, and Larson found herself with plenty of spare time to read about Catholicism. She started with the Rosary and soon learned there was a Catholic cathedral named for the Holy Rosary in Vancouver.

Around the same time Larson was also facing a personal crisis. She had ended a relationship she’d been in for some time during college, and as a young woman in her early twenties, was seeking solace and new beginnings.

She happened to hear about a popular Anglican church in downtown Vancouver and gave that community a try. When their worship services moved online, she continued watching them and others, while also researching Catholicism and teaching herself to pray the Rosary.

One day, she discovered Holy Rosary Cathedral’s YouTube channel and watched Mass for the first time.

“I didn’t understand the Mass or anything, but it immediately drew me in.”

She started reading about the history of Christianity and the various denominations and realized some elements of Mass she enjoyed, like the structure, choral tradition, and mentions of Mary, were missing in other traditions.

It took her a while to gather the courage, but after much time, prayer, and thought, she reached out to Holy Rosary Cathedral directly. “Asking God gave me the courage to take the first step in becoming Catholic,” she said.

Reflecting on Mary’s “yes” to carry Jesus in her womb also gave Larson the strength. “That always stuck out to me, how she was scared and uncertain of what the angel was telling her, and the way she just said, ‘let it be done to me according to your word,’ gave me so much courage, how she just said yes to God without knowing how it was going to work out.”

Larson emailed a cathedral priest to say she enjoyed praying the Rosary and thought she would like to become a Catholic.

In September 2020, she entered the Rite of Christian Initiation program at Holy Rosary Cathedral. Led by Deacon Richard Chau, the program was run entirely online and introduced Larson to some of the first Catholics she had ever personally met.

“I don’t have anyone who’s Catholic in my family and I felt kind of overwhelmed. I remember thinking it was such a big change in my life, to go from not being brought up religious at all to actively living as a Catholic,” said Larson.

“Every time I thought it was going to be too hard – I am going to change my life too much, I don’t know if I can do this, the thought of being the only Catholic in my family – every time I had those doubts, I would discover something else about Mary and it would bring me back.”

This April, in a small, private ceremony at Holy Rosary Cathedral, Larson was baptized a Catholic.

“Mary was drawing her into the Church and pointing her to Christ, and she responded to that. It’s wonderful,” said Deacon Chau.

Five others from Larson’s RCIA class have also been baptized, and two have been confirmed.

Larson said since her conversion many family members have become curious about various elements of Catholicism and start conversations with her about them. Her mother, who attended a Christian church in her youth, was especially moved.

“Ever since I became Catholic it has deepened my relationship with my mom. Talk about God with my family is more than I could have hoped for.”

She looks forward to the day she can attend Mass in person, gather with other young Catholics, and become a volunteer at one of the Catholic parishes in her neighbourhood. In the meantime, she participates in livestreamed Masses, watches informational Catholic content online, reads prayer books, and, no surprise, prays the Rosary on a set of pink beads every day.

“I don’t know what I would do without it,” she said.

“During these times, we’re distant from the Church. Something like that, that you can physically hold, is really grounding. You feel connected to the rest of the Church.”

This article was first published by The B.C. Catholic and is reprinted with permission.

Meet the Mother Challenging the UK...