Binding Beads for Our Lady of the Rosary 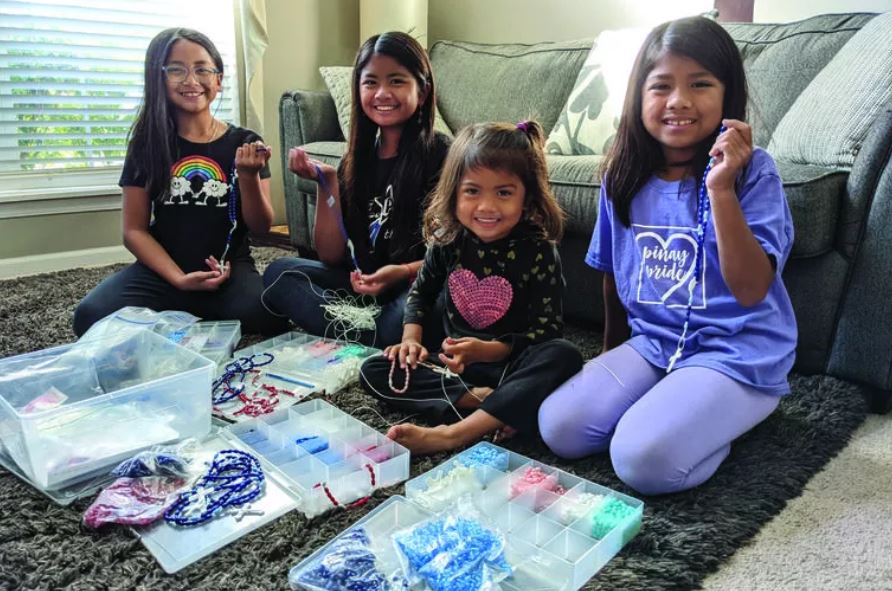 Binding Beads for Our Lady of the Rosary

Rosary makers are blessed by their efforts.

“Up to the week before she died, she was still making rosaries for Uganda,” Father Rob Jack said of his great-aunt, Betty McGuire, who died two years ago at the age of 94 in Middletown, Ohio. “That’s dedication.”

In Huntley, Illinois, James and Rachel Quicho and their four daughters, ages 4 to 11, know such dedication, as part of their parish’s rosary-making group.

And, in El Paso, Texas, Tom and Ronda Scrivner have made and donated rosaries to colleges’ Newman Centers and to an orphanage in neighboring Juarez, Mexico.

Our Lady’s Rosary Makers in Louisville, Kentucky, knows the dedication and blessings that come from rosary-making, too. The apostolate was launched in 1949 by a Xaverian brother. “Seventy-plus years later, people have made 250 million rosaries,” explained Michael Ford, who, for 23 years, has served as the president and general manager of Our Lady’s Rosary Makers.

“Amazing is the word.”

Even before becoming president, he has seen the apostolate grow. “From 1992 to 2019, we averaged a steady 6.7 million rosaries a year,” he said of the numbers being made. “There are still plenty of rosary-making groups.”

Ford said that in the 1970s cord rosaries began to appear, “which contributed in large part to the high numbers. It was much easier to make a cord rosary and make it much more quickly than a wire rosary.” Today, plastic parts make the process even simpler.

The Scrivners started in 2014 when they wanted to do something in memory of their daughter Tommy Lynn, a teacher, who died. Because she graduated from Texas Tech in Lubbock, they made 100 rosaries in the school’s colors of red and black, brought them to a Catholic church there, and were edified by the response — all the rosaries were taken by willing pray-ers. Ronda said to Tom, “Let’s do this for a ministry.”

“That was our incentive: to make rosaries in school colors for the Catholic campus centers and Newman Centers around the country,” Tom added.

At present, the Scrivners have made and donated more than 94,810 rosaries — that totals 5.5 million beads.

“It’s our ministry, and we feel very strongly about it,” Tom said.

“We’re blessed to be able to do this. My mother-in-law Clodine Norris will be 99 in October and still does a few rosaries. We’ve been so blessed. We have such a special relation with our Mother Mary, the Holy Spirit, Jesus Christ and the Holy Father.”

In 2017, James and Rachel Quicho joined the Holy Family Rosary Ministry at St. Mary Catholic Church. This July, Rachel, who considers this a calling, became head of the ministry.

While the parish group meets bimonthly, the family works at home with their children — Abigail, Marigrace, Patricia and Josephine — happily beading, too. Abigail, the oldest, makes rosaries from start to finish, even knotting the medallion and crucifix at the end, while the other three sisters focus on the beading. Even 4-year-old Josephine does the 10-bead decades and spacers. “She’s learning how to count that way, too,” explained Rachel. During one recent summer the girls themselves made 560 rosaries.

Rachel and James teach religious education — reconciliation to upcoming first communicants — and have all the second graders, around 200, make their own rosaries before they make their first Communion. Members of the Rosary group teach each class.

Whether as a family or with the parish ministry, the Quichos are connected to Our Lady’s Rosary Makers. It is also an extended family effort, as two aunts are part of the parish’s ministry, which completed 4,275 rosaries from July 1 until the end of September. Before the pandemic, “our ministry has made as much as 20,000 rosaries a year,” Rachel reported.

Rachel said that among the many recipients are rosaries for their parish’s pro-life ministry, various charitable organizations, such as Our Lady of the Angels Mission in Chicago, missions around the world, prison chaplains, the military, nursing homes and hospitals. A Filipino priest brings them to the Philippines, and 1,500 rosaries went this September to the local chapter of St. Paul Street Evangelization.

Sometimes the blessings are unexpected. “When I gave birth in the hospital to my youngest, there was a Eucharistic minister giving out our rosaries,” Rachel explained.

Our Lady’s Rosary Makers models the Parable of the Mustard Seed. In May 1949, Xaverian Brother Sylvan Mattingly determined to do something “extra” for the Blessed Mother in response to fulfill her urgent requests at Fatima. He began teaching children how to make rosaries for the world’s mission fields.

Once Brother Sylvan sent out a few rosaries, letters poured in from missions over the world asking for free rosaries. From a tiny office in the basement at St. Xavier High School in Louisville, Kentucky, he named his club “Our Lady of Fatima Rosary Making Club.” Word spread. People in town made him 6,000 rosaries. Groups in Denver and Detroit asked him to teach them rosary-making.

Shortly before he died in 1951, Brother Sylvan asked newly ordained Father Bertrand Rapp to take over as the club’s chaplain. Father Rapp worked vigorously, setting up groups to keep rosary-making clubs growing in parishes and schools. Now, it’s the world’s leading mission-rosary apostolate, with thousands of members in all 50 states and 23 foreign countries.

By 1968, the apostolate had to build a new International Rosary Center in Louisville to fill the orders of supplies that rosary-makers required. This lay-run, nonprofit apostolate also sends out a bimonthly newsletter connecting members and groups with missionaries and missions here and abroad needing free rosaries.

In a recent newsletter, a sample of requests came from priests in Tanzania, Uganda, Ghana, among other African countries, India and the Philippines. Stateside, requests came from such entities as Operation Support Our Troops in Naperville, Illinois; a New York man sending rosaries to Papua New Guinea; a Florida woman and a Georgia deacon with requests for rosaries for Venezuela; a woman wishing to send them to schoolchildren in Missouri; and a Pennsylvania man wanting to ship them to U.S. prisons.

The rosaries are also connected to vocations, as many of the countries that receive the rosaries — and the children who receive them — later see vocations flourish.

“Rosaries were for the missions,” Father Jack explained. “Now priests from those countries are arriving here.”

Father Jack, host of Driving Home the Faith on Sacred Heart Radio in Cincinnati, has made at least 15,000 rosaries over the 25 years he has been using materials from Our Lady’s Rosary Makers.

He began in 1996 while he was serving as a hospital chaplain. “I wanted to give something to the sick at my hospital and other hospitals in the Cincinnati area,” he said. Later, while teaching in 2002, he found time to make cord rosaries for all the kids in the school “in the colors of the school.”

Father Jack encourages rosary-making with the goal to get people to pray the Rosary more.

Father Jack remembers a gentleman coming up to him with tears in his eyes a week after he received a rosary. “That rosary you gave me was the first rosary anybody has given me in 40 years,” the man said. “I’ve been saying it every day. I want to get back in the Church.”

“The Christian faith is always about meeting people face-to-face and putting something in their hand — a rosary, medal, especially trying to revive old faith and light up a new fire,” Father Jack said. “My motto is, ‘if you want somebody to do something, you put it in their hands — I want to share my faith with you.’”

The backbone of these efforts, of course, are the 600,000-plus bags of beads each year — enough for 6 million and more rosaries — packaged at Our Lady’s Rosary Makers and then sent out. The plastic beads, crucifixes and centers are molded locally in Louisville.

Our Lady’s Rosary Makers employees gather each morning in the beautiful chapel at the apostolate’s International Rosary Center and pray the Rosary every morning before the Blessed Sacrament. Visitors are always welcome to join in prayer, too.

And the prayerful legacy endures.

“Seventy years ago, Brother Sylvan prayed for rosary-makers who were to come,” Ford explained. “Recently, a girl wrote: ‘I learned about rosary-making from my grandmother, who was making rosaries until her last weeks. I’m new to this process.’ This 25-year-old granddaughter wants to learn to make rosaries to continue what her grandmother did.”