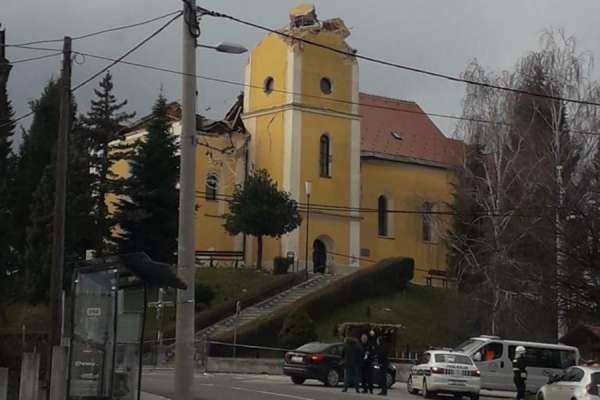 Bishop Vlado Košić of Sisak issued the appeal to Catholics in his diocese and throughout the country after a magnitude 6.4 earthquake on Dec. 29 that killed at least seven people and injured 26 others.

His diocese includes the town of Petrinja, located close to the epicenter of the quake, which was felt in the neighboring countries of Slovenia, Bosnia and Herzegovina, Serbia, and Hungary, as well as Austria and Italy.

In a statement reported Dec. 30 by Croatia’s Catholic Information Agency, the bishop called for prayer and fasting Dec. 30-31 that residents would be spared further suffering.

He said that many people had been left homeless and feared aftershocks.

“We lost the cathedral and about a dozen other churches, not counting the chapels, which were destroyed by the earthquake, and many were severely damaged,” he said.

“We pray for the strength to endure all this faithfully and that in this tragedy we all remain brave and in solidarity.”

Among those killed in the earthquake was a 12-year-old girl. Another victim was discovered in the rubble at a church in the village of Žažina. Local media reported that the man was the church’s organist.

An estimated 86% of Croatia’s four million-strong population is Catholic.

Yesterday, an earthquake in Croatia caused victims and caused serious damage. I express my closeness to the wounded and to those who have been affected by the quake and I pray in particular for those who have lost their lives and for their families.

At Wednesday’s general audience, Pope Francis prayed for the victims of the earthquake.

He said: “Yesterday an earthquake caused casualties and extensive damage in Croatia. I express my closeness to the injured and to those affected by the earthquake, and I pray in particular for those who have lost their lives and for their families.”

“I hope that the authorities of the country, with the help of the international community, will soon be able to alleviate the suffering of the dear Croatian people.”

The Pastoral Directorate for Croats Abroad has urged members of the Croatian diaspora to send aid via Caritas Croatia.