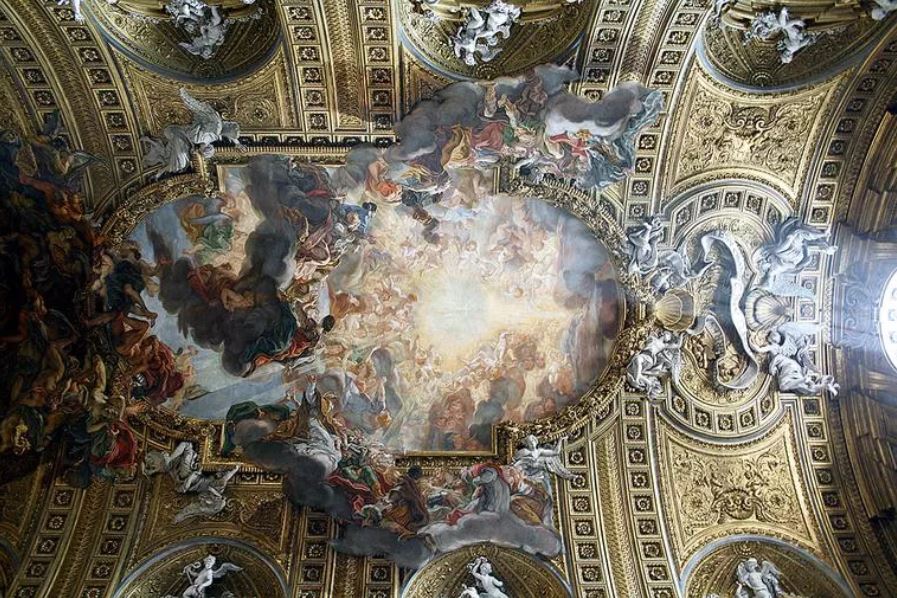 Here’s how to use ‘evangelistic jujitsu’ to joyfully counter irreverence toward the Holy Name of Jesus.

In our increasingly secularized society, we can all give witness to our Lord Jesus Christ by simply — and serenely — affirming his holy name when it’s irreverently used (see John 14:27).

“Praised be his name,” I responded, when a Catholic friend misused the name of Jesus during a football game we were watching with others.

He paused and looked at me, and I smiled amiably in response.

Later, during the same game, he made a similar expression, which, while sadly common at — and in viewing otherwise — sports events, provides us an opportunity to give witness to the Gospel.

“Praised be his name” I responded again with a smile. At this point, my friend — who was raised Catholic — apologized for his misuse of the name of Jesus and didn’t repeat his actions.

When we joyfully affirm our Lord’s name after others misuse it — whether out of contempt for Christ and/or ingrained habit — we can humbly disarm them. Indeed, we’re more likely to be effective than with a harsh rebuke. I compare such efforts to jujitsu, a martial art in which you “use an attacker’s energy against him, rather than directly opposing it.”

However, whereas conventional jujitsu is used to subdue or even kill an opponent, “evangelistic jujitsu” employs the strength of Jesus’ name for the good of those who misuse it, hopefully reawaking them — and others present — to the power and person of the divine Christ.

A couple of years ago, a friend was talking with a physician at the University [of Michigan] Hospital, with a group of young medical residents looking on. At one point, the doctor shouted the name of Jesus irreverently in response to a question.

“Blessed be his name,” my friend peacefully replied, reducing the stunned doctor to a silent stare. My friend also grabbed the attention of the wide-eyed residents, who were astonished that someone would pay homage to the name of Jesus in today’s culture.

“All hail the power of Jesus’ name,” the popular hymn proclaims, and we Catholics used to do that a lot better in centuries past, and even in recent decades. While pious Protestants are often more associated with respecting the name of Jesus today, the Catholic Church Jesus founded blazed the trail.

As St. Paul teaches, because Jesus “humbled himself and became obedient unto death, even death on a cross,” his Heavenly Father “highly exalted him and bestowed on him the name which is above every name, that at the name of Jesus every knee should bow, in heaven and on earth and under the earth, and every tongue confess that Jesus Christ is Lord, to the glory of God the Father” (Philippians 2:8–11).

In addition, at the Temple one day, the first Pope demonstrated the power of Jesus’ name when he healed a man lame from birth:

“Peter said, ‘I have no silver and gold, but I give you what I have; in the name of Jesus Christ of Nazareth, walk.’ And he took him by the right hand and raised him up; and immediately his feet and ankles were made strong. And leaping up he stood and walked and entered the temple with them, walking and leaping and praising God“ (Acts 3:6–8).

Conversely, Satan and his demonic minions recoil at the name of Jesus.

In the 13th century, at the direction of Pope Nicholas IV, Blessed John of Vercelli spread renewed devotion to Holy Name of Jesus. In contrast to the Federal Communications Commission (FCC) today, Blessed John and the supreme pontiff understood that a profanity is worse than a vulgarity, even though both should be avoided. Thus, while broadcasting certain bad words can yield fines for conventional radio and television hosts and their stations, misusing the name of Jesus is not numbered among those offenses, nor is disrespectful use of God’s name in general.

In the mid-1500s, the Confraternity of the Most Holy Name of God and Jesus — more commonly known as the Holy Name Society — became canonically recognized by the Holy See, and grew to become a prominent apostolate throughout the Church. Around the same time, the Church began to celebrate the Feast of the Holy Name of Jesus that, prior to the Second Vatican Council, was commemorated on the Sunday between the Feast of the Circumcision of Jesus (then Jan. 1) and the Solemnity of the Epiphany of the Lord (then Jan. 6); and on Jan. 2 if there was no Sunday between those two feasts. In the revision of the Church’s liturgical calendar in 1969, the Feast of the Holy Name was removed, although Pope St. John Paul II later restored it as an optional memorial for Jan. 3.

Because of its lower liturgical status, we didn’t celebrate the memorial this year, because it fell on the Sunday we celebrated the Epiphany. May Pope Francis or his successor restore it soon to the level of a feast.

Even in the late 1980s, when I served as a young reporter for The Catholic Observer in the Diocese of Springfield, Massachusetts, a chapter of the Holy Name Society was active, although most of its leaders were older.

We need to change that. In recent liturgical reforms, the Church has sought to foster greater reverence for the name of Jesus, but the faithful can miss these subtle reminders unless priests commit to cultivating good habits among their congregants. As the General Instruction of the Roman Missal (GIRM) provides regarding the Sacrifice of the Mass:

“A bow signifies reverence and honor shown to the persons themselves or to the signs that represent them. … A bow of the head is made when the three Divine Persons are named together and at the names of Jesus, of the Blessed Virgin Mary, and of the Saint in whose honor Mass is being celebrated” (275).

Because the faithful can easily overlook a priest’s head bows when he invokes the name of Jesus during Mass, bishops should direct priests to urge parishioners to join them in these acts of reverence. Such repeated formation is fundamental in restoring reverence for the name of Jesus.

Still, with Sunday Mass participation rates at under 25% in America, irrespective of COVID-19 restrictions, we need to take reverence for Christ’s name to the streets, whether strolling downtown in the summer, interacting at the water cooler at work, or simply gathering wherever with friends. This will more likely take place if pastors galvanize and mobilize the spiritual troops at Mass.

In addition, as part of the U.S. Bishops’ Eucharistic Revival, which is set to begin next year, I encourage the bishops to issue a brief proclamation on how reverence for the holy name of Jesus goes hand-in-hand with devotion to his Eucharistic Real Presence, and so clergy and laity alike can renew their commitment to foster such reverence.

Also, given heightened sensitivity about diversity and inclusion in the workplace, let’s encourage corporations and bosses to ask employees to respect the name of Jesus, especially in the presence of Christian co-workers.

And if that doesn’t work, we can always return to our default position in which we briefly and joyfully praise his holy name — whether at work, home, or various types of social gatherings. And such a witness can lead to apologetical discussions in which we explain the Faith and dispel errors. Even a nonverbal — yet visible — head bow can help raise awareness re: the holy name of Jesus, and thus help plants seeds for cultivating reverence toward — and an encounter with — Jesus himself.

Society’s Impact on Men: How the C...