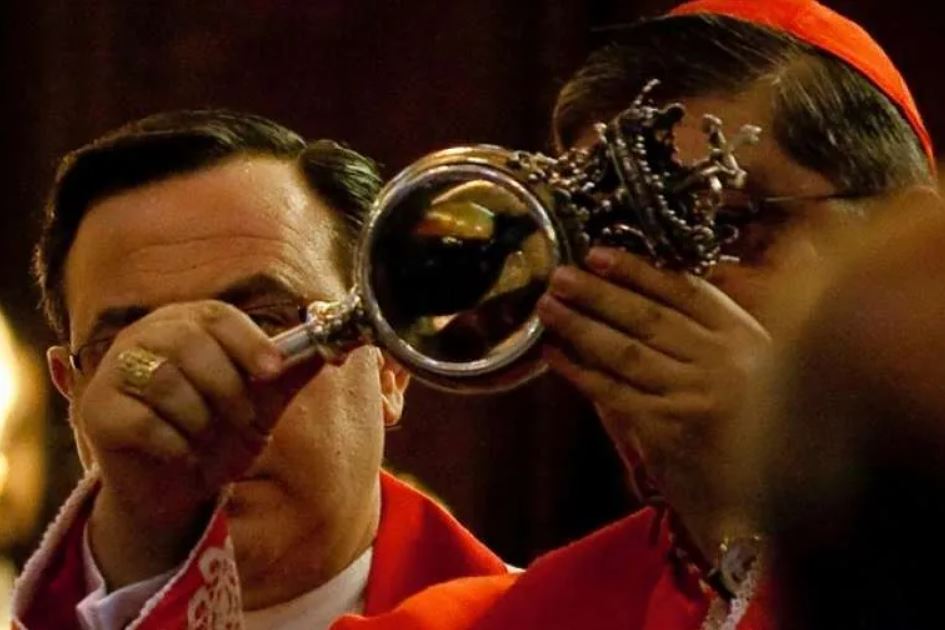 Cardinal Crescenzio Sepe views the reliquary with the blood of St. Januarius in 2009. / Paola Migni via Flickr (CC BY 2.0)

The blood of St. Januarius, patron of the southern Italian city of Naples, liquefied on Sunday.

Naples archdiocese announced that the miraculous event took place at 5:18 p.m. local time on May 2.

A video posted to YouTube on May 3 showed a monsignor displaying the reliquary and turning it to demonstrate that the blood inside a spherical ampoule had turned from a solid to a liquid state.

During the miracle, the dried, red-colored mass confined to one side of the reliquary becomes blood that covers the entire glass. In local lore, the failure of the blood to liquefy signals war, famine, disease, or other disaster.

The liquefaction usually occurs annually on the afternoon of the first Saturday in May. But this year, it happened on the second day of prayer in honor of the third-century bishop of Naples.

The bones and blood of St. Januarius — San Gennaro in Italian — are preserved as relics in Naples Cathedral. The bishop is believed to have been martyred during the Diocletian persecution.

The reputed miracle is locally known and accepted, though it is yet to receive official Church recognition. The liquefaction traditionally happens at least three times a year: Sept. 19, the saint’s feast day; the first Saturday of May; and Dec. 16, the anniversary of the 1631 eruption of the nearby Mount Vesuvius.

The saint’s blood remained solid in December 2020, having liquefied both in May and September that year.

Preaching at Mass in Naples Cathedral on May 1, Archbishop Domenico Battaglia noted that the procession traditionally held on the first Saturday in May was canceled this year due to the coronavirus pandemic.

The procession begins at the cathedral and ends at the Church of Santa Chiara. The reliquary containing the blood and an ornate bust of St. Januarius are carried in the procession, along with statues of other saints.

Battaglia, who was installed as archbishop of Naples on Feb. 2, 2021, succeeding Cardinal Crescenzio Sepe, celebrated the Mass in the presence of 200 people due to COVID-19 restrictions.

In his homily, he encouraged people not to be overly “intrigued by the miracle” and “seized by the yearning to read in it good omens or ominous omens for our future.”

Regardless of whether the blood liquefies, he said, the relic should remind Catholics of the blood of Christ “in whose Paschal Mystery we still find ourselves and who is the only one who gives meaning to the great and intense icon of the liquefying blood.”

The 58-year-old archbishop continued: “What in fact is this ampoule? What treasure is it part of? These questions must delve into our hearts every time the martyr Januarius comes to meet us with the sign of his blood.”

“The blood of the martyrs is not a museum piece or a simple relic to be devoutly kept, but a living sign for the today that is given to us, a clear indication for this time that we are called to inhabit, a prophecy of the way in which we must live and a clear reference to what is worth dying for.”

The archbishop, described as a “street priest” before his elevation, recalled by name recent victims of the Camorra mafia and domestic violence, as well as lonely elderly people and the unemployed.

He said: “There is no social sore or communal wound that does not have the right of citizenship in this precious reliquary, the marvelous apex of the entire treasure of St. Januarius.”

“But don’t misunderstand me, I’m not talking about the precious stones, nor the gems set among golden miters, nor the silver busts of the saints. The real treasure of St. Januarius is his people and, within them, those who sit on the margins of life, the last ones, the most fragile.”

“It is this treasure that, as the Church, together with the institutions and all men and women of goodwill, we are called to guard with fidelity and courage, drawing on the immense patrimony hidden among the shadows and lights that compose it: I am speaking of the patrimony of humanity of this city, of the desire for redemption of its people, of the solidarity of its people. It is from this treasure that St. Januarius asks us to begin again together.”

Catholic sister: Pro-lifers must b...