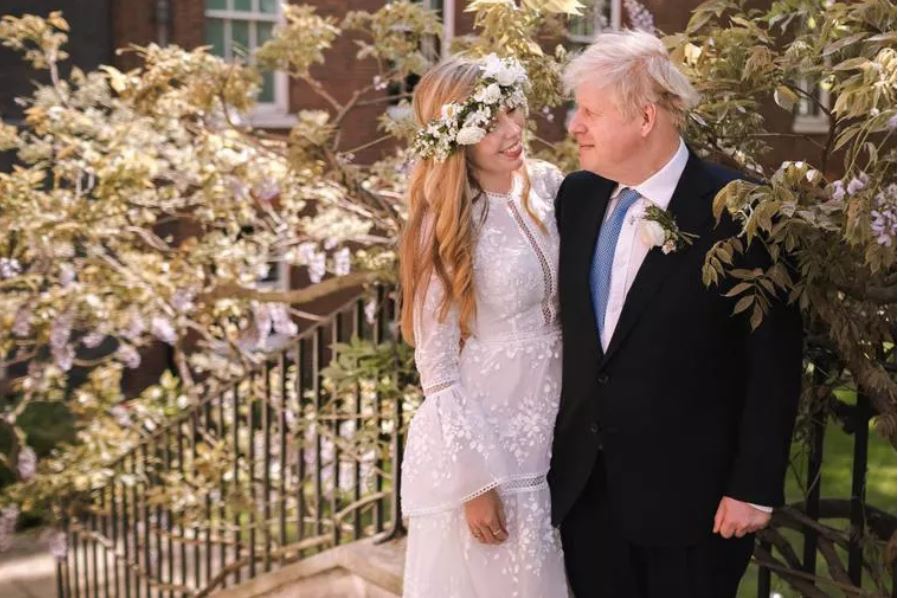 In this handout image released by 10 Downing Street, Prime Minister Boris Johnson poses with his wife Carrie Johnson in the garden of 10 Downing Street following their wedding at Westminster Cathedral, May 29, 2021 in London, England. (photo: Rebecca Fulton/Downing Street / Getty)

By all accounts, Mr. Johnson was treated in the same way as any other Catholic would have been in his situation.

There has been a great deal of controversy in the news and on social media surrounding the recent marriage of Boris Johnson, the prime minister of the United Kingdom, in the Cathedral Church of the Diocese of Westminster in London. The focus of the acrimony has been an accusation by some that Johnson received special treatment because of his office and wealth. These accusations, however, have largely been fueled by some rather severe misunderstanding of the Church’s theology and law of marriage as well as her ecclesiology.

By all accounts, Johnson was treated in the same way as any other Catholic would have been in his situation. To help provide some clarity, below is a very brief primer on the Church’s teaching and discipline on marriage and membership in the Church.

Before addressing these issues, I should state that I have no special information regarding Johnson’s marriage, but am informed by the accounts in the media and especially by the public statement issued by the Diocese of Westminster. Also, I would add one note of caution: In the reflexively suspicious and polarized environment we live in today, I urge Catholics to approach these sorts of controversy with a spirit of charity and guard themselves against getting sucked into needless acrimony or division, which in many cases are based on inadequate understanding of Church teaching and history. And to that point I take up Johnson’s third wedding.

The Church defines marriage as a “matrimonial covenant, by which a man and a woman establish between themselves a partnership of the whole of life and which is ordered by its nature to the good of the spouses and the procreation and education of offspring” (Canon 1055 §1). To create this matrimonial covenant or bond, the man and woman must be free to marry. It is the coming into existence of that marriage bond that makes for a valid marriage.

As discussed further below, while it is their subjective consent that gives rise to the bond, there are objective conditions that affect whether the bond in fact arises. In natural law, that means they must be of sufficient age, not be married to someone else, be physically able to consummate the marriage, and have sufficient use of reason. What makes marriage a sacrament is the fact that there exists a valid marriage between two baptized persons.

A “natural” marriage is one in which one or both are non-baptized, i.e., it is a non-sacrament. Thus, a baptized Catholic who marries a non-baptized person may be validly married “in the Church,” but it would not be considered a sacrament.

In the Church’s long tradition, it is consent alone that creates a valid marriage, and that has been the clear teaching for most of the history of the Latin Church. (There is a slightly different approach in the Eastern Churches.) As consent is an act of the will and the intellect, it means the couple must sufficiently know what they are doing and that their choice is sufficiently free.

In addition to these basic requirements of the natural law, the Church has always asserted for itself the right to regulate marriage further. This was established definitively by the Church’s magisterium during the Council of Trent. Thus, for example, the Church has instituted several “impediments,” the existence of which in an attempted marriage serve to invalidate it.

For example, in current Church law, a person who kills his spouse (conjugicide) to marry another is impeded from marrying that person. Unless that impediment were dispensed (and only the Holy See may dispense the impediment of conjugicide), the attempted marriage would be invalid.

Another important way the Church has regulated marriage has been to discourage so-called clandestine marriages. In the past, the private exchange of consent of the parties alone was sufficient to establish marriage. However, issues of the lack of proof (and lying, faithless men) caused many problems. Therefore, the Church established as a discipline what is known as “canonical form,” which was added as necessary for the validity of the marriage.

In brief, canonical form, unless otherwise dispensed, requires parties to be married before two witnesses and by an official representative of the Church (usually the local pastor) who is authorized to receive their vows. The Church also requires certain other Christians to observe their own legal form.

Thus, while for non-Catholics a “valid” marriage is created by free consent of those capable of marriage, Catholics have additional requirements and conditions. A valid marriage for Catholics also requires canonical form and the lack of any impediment imposed by the Church, unless these are dispensed.

Could Johnson’s Third Attempt at Marriage be a Valid Catholic Marriage?

It seems to be commonly known that Johnson was baptized in the Catholic Church. As a result, the Church considers him bound to Church law. This strikes some as unfair, especially as Johnson seems to have rejected the Church by his decision to be “confirmed” in a non-Catholic ecclesial communion.

However, membership in the Church is not solely a subjective determination. By the very fact of baptism, one is incorporated into the one Church of Christ which, as the Second Vatican Council taught, subsists in the Catholic Church. Furthermore, the Church understands herself as an objective society, whose reality is more than simply the subjective consent of the members. In much the same way, those who live in the United Kingdom are subject to its laws, even if they disagree with its authority over them.

Part of the difficulty here has been what one means by saying someone is a “Catholic.” We must be aware that we use words equivocally, giving them a wide variety in meaning. One can say “I love pizza” and “I love my mother,” but the divergence in meaning of those two “loves” is greater than their similarity — i.e., “love” doesn’t always mean “love.” In common speaking, we call someone a “Catholic” who personally identifies with the faith, who has subjectively chosen to adhere to the tenets and practice of the Catholic Church.

In the Church, we use the term differently. From the perspective of the law, the most basic definition of being Catholic means one who has baptized or received into the Church. However, the law also speaks of being “Catholic” as being one in full communion with the Church, namely the communion of faith, of governance, and of sacraments.

From a legal perspective, a person who was baptized in the Catholic Church but now rejects the faith is still “Catholic” in the basic legal sense, even if not “Catholic” in the sense of being fully in communion with the Church.

Putting these two threads of law together, it means that for Johnson to marry validly in the Church he was required to observe canonical form (in short, before two witnesses and by an official representative of the Church). His baptism in the Catholic Church made him a Catholic, and therefore bound to its laws, which did not cease with his membership in another ecclesial communion. While he may have abandoned the Church, the Church did not abandon him. He may have attempted marriage twice in the past, but the lack of canonical form rendered those attempts invalid.

In other words, until his most recent exchange of vows, Johnson was never validly married, but was only in what the Church calls a “putative” marriage, i.e., having the appearance of marriage but in reality null. As such, an exercise of the Church’s authority to determine the invalidity of those marriages would have been required. However, the invalidity of marriages due to the lack of canonical form are relatively easy to prove, and usually done rather quickly.

Likewise, Johnson’s divorces had no effect on the Church’s understanding of his marriage. From the Church’s point of view, civil divorce only affects civil rights and duties. No decision by a secular authority has any effect on the reality of the marriage bond.

The Church firmly upholds the indissolubility of marriage. The civil divorces did not serve to dissolve his previous marriages because, from the Church’s perspective, there were no marriage bonds to be dissolved. The lack of canonical form served to prevent the creation of the marriage bond, despite the words and intentions of the couple and the civil understanding that they were married.

Was the Westminster Wedding A Privilege?

It has also been alleged that Johnson received special treatment in where he was married, namely Westminster Cathedral. In general, the law assumes Catholics receive their sacraments from their proper pastor, especially baptism and marriage. That is not determined by the parish in which they are “registered”, but in the parish in whose boundaries they live. It seems that Johnson and his wife live in the territory of Westminster Cathedral. Therefore, the law expects them to be married there, and having that as the location of the marriage was not some special benefit given to them. In fact, they would have had to receive special permission to marry somewhere else.

One of the most alarming responses to Johnson’s wedding is those who believe the Church should have denied them the opportunity to marry. In the Church’s law, the faithful have a certain right to the sacraments. It is not an absolute right, and in fact may have to be denied at times. This right is in some ways even stronger in the case of marriage, to which one also has a right in natural law. It is not the role of pastors to invent impediments for marriage.

All the sacraments, including marriage, are an opportunity for grace and an invitation to conversion. Johnson’s previous attempts at marriage should give a pastor pause both about his understanding of the indissolubility of marriage and his willingness to accept it. However, assuming he has, one should welcome this marriage with the joy of knowing the grace that is given in the reception of this sacrament.

Moreover, all Catholics and those of good will should pray for the newly married couple that, despite their previous sins, in their new marriage they may come to reflect the love that Christ has for his bride, the Church.