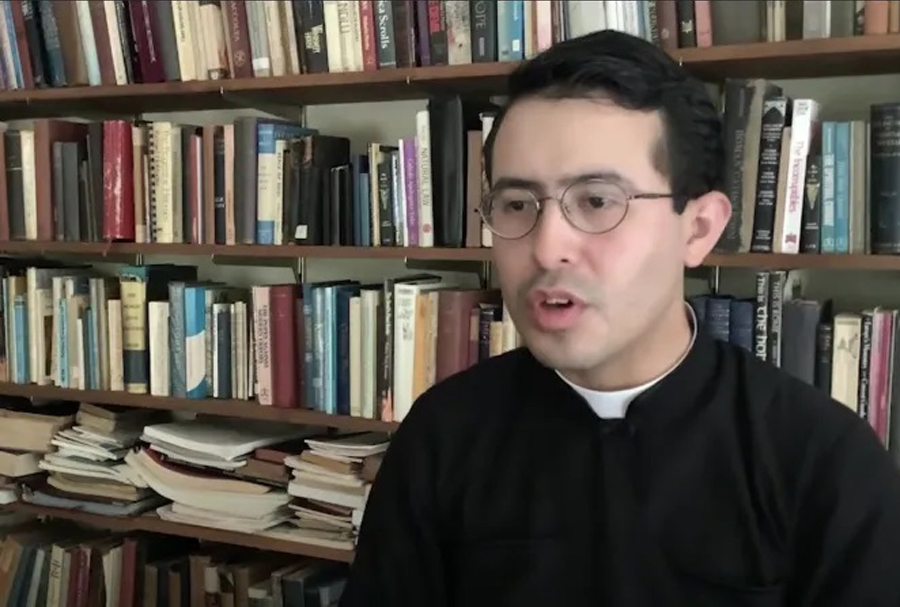 Martin Navarro, a layman and founder of the group the Oblates of St. Augustine, is refusing to obey his bishop’s demands that he no longer fundraise, identify himself as “brother,” dress in a habit, and construct a chapel in the Diocese of Kansas City-St. Joseph. / Screenshot from YouTube video

A social media-savvy layman, who uses the title “Brother” and wears a habit, will not obey his bishop’s orders to cease presenting himself as a religious brother or member of a religious community.

Nor will Martin Navarro  — whose “Br. Martin” Twitter account has more than 11,000 followers — acquiesce to Bishop James Johnston’s demands to stop fundraising in the Diocese of Kansas City-St. Joseph and cease building an unauthorized chapel.

As to his practice of wearing a habit, he said, “it’s a free country, so to speak; you can wear whatever you want.”

Johnston denied the request. He also ordered the group to cease operating in the diocese.

The bishop issued the demands in a letter dated May 6 addressed to Navarro. Navarro made the letter public in the same YouTube video from May 17.

“I have not given nor will give approval or permission to explore, found, or establish the community about which you have previously inquired,” Johnston stated in the letter.

“I further direct that you do not use the religious title of ‘Brother Martin’ at any time nor dress in a religious habit, since in justice and truth, your canonical status is not one of membership within a religious community, such continued usage is both disingenuous and dishonest,” he added. Johnston reiterated his demands “in order to emphasize the seriousness of my warning and prohibitions” at the end of the letter.

“Your request of me regarding your proposed formation of Oblates of Saint Augustine is, therefore, denied.”

Navarro told CNA on May 18 that he will not comply with Johnston’s orders.

The Oblates of St. Augustine community he leads is based in Weston, Missouri, a small town about a 40-minute drive north of Kansas City. It’s unclear how many men are in the group. Speaking to CNA, Navarro would only say that since founding the Oblates in 2020, “I’ve never been alone.”

Navarro said the group is currently living on property leased to them by Mike Parrott, the host of a YouTube channel called Restoring the Faith Media. The group’s chapel in a converted garage already is under construction on the property, and nearing completion. Navarro told CNA the group has raised more than $161,000 for the monastery project. A separate funding drive accepts donations for the group members’ living expenses.

In his letter, Johnston cited several canons, as well as Pope Francis’ 2020 motu proprio Authenticum charismatis, to support his authority over the group’s activities in his diocese.

Johnston warned that “failure to observe these provisions … could result in further disciplinary actions. Accordingly, this letter itself stands as due canonical warning of the same.”

Navarro, for his part, says Johnston is misinterpreting church law, and using it “to intimidate us from praying.”

“Bishop Johnston has communicated appropriate guidance and next steps with Mr. Navarro regarding his request to establish the Oblates of St. Augustine in the Diocese of Kansas City-St. Joseph,” Hand said. “Bishop Johnston intends any further communication to be private.”

‘Doctor Strange in the Multiverse...