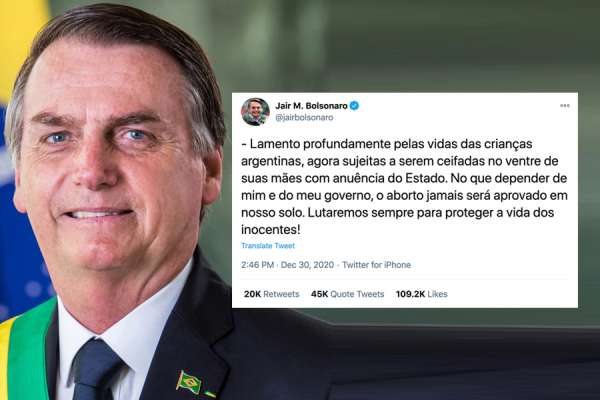 CNA Staff, Dec 31, 2020 / 12:49 pm (CNA).- In a short message published on his Twitter account, Brazilian President Jair Bolsonaro criticized the decision of the Argentinian Senate to legalize abortion and vowed that abortion will never become legal in Brazil – the largest Latin American country – under his presidency.

“I deeply lament for the lives of Argentinian children, now subject to being cut in their mothers’ wombs with the consent of the State. As far as it depends on me and my government, abortion will never be approved on our land. We will always fight to protect the lives of the innocent!,” tweeted Bolsonaro.

A new abortion law was approved by the Argentinian Senate on Wednesday, December 30. The new law, in practice, will allow abortions at any time until birth and has no provisions for protecting the baby if he or she survives a late-term abortion.