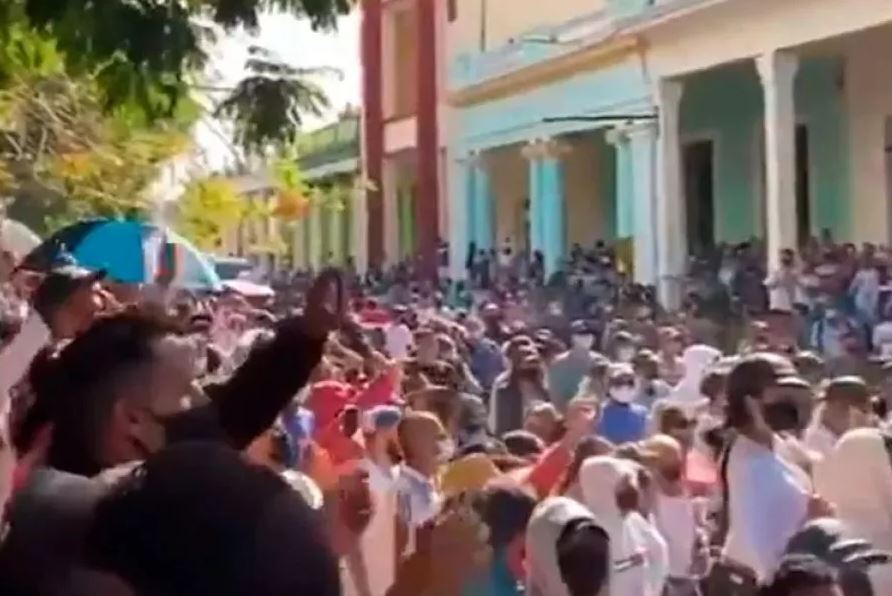 On Sunday, July 11th, the Christian Liberation Movement (MCL) called on Cubans to continue to pressure Cuban communist authorities to open general elections after thousands of people took the streets of major local cities to protest the unprecedented scarcity of essentials and the death rate produced by COVID-19.

After months of food and medicine shortages and the collapse of hospitals due to the pandemic, thousands of Cubans took to the streets shouting “Down with the dictatorship!”, “Homeland and life!”, “We want vaccines!”, and “we are not afraid!”, in the largest demonstrations that ever occurred in more than 60 years of Communist rule. Protesters in some regions marched with the image of Our Lady of Charity, the national Marian advocate of Cuba.

Eduardo Cardet Concepción, National Coordinator of the MCL, released a statement received by our sister news agency in Spanish, ACI Prensa, saying that “thousands of Cubans are in the streets today peacefully demonstrating, demanding freedom and an end to repression and misery.” They are doing so, said MCL, “in order for the tyranny to end.”

“The MCL, as part of this people tired of oppression and injustice, is fully identified with their desires. We support our brothers and sisters of the Christian Liberation Movement and all Cubans who demonstrate peacefully, making use of this legitimate right,” the statement said.

The statement demands “the release of political prisoners, the annulment of the repressive laws against freedom, recognition of economic rights of free enterprise for Cubans, recognition of each Cuban’s–inside and outside the island–right to vote and to be elected.”

The statement concluded with the demands “[t]o hold elections with all these guarantees” and “Freedom Now!”

The MCL was founded by Catholic dissident Oswaldo Payá Sardiñas in 1988 to achieve a peaceful democratic reform in Cuba, explicitly inspired by the social doctrine of the Church. Taking advantage of a loophole in the Communist constitution, Payá organized a collection of signatures to introduce democracy in Cuba. As a consequence, the movement was persecuted nationwide and 42 of its leaders ended up in prison during the 2003 wave of repression known as the “Cuban Spring.”

On July 22, 2012, Payá and another MCL leader, Harold Cepero, were killed in a car accident in suspicious circumstances.

The Sunday wave of protests started in the western town of San Antonio de los Baños and promptly spread across the island to Havana and the eastern city of Santiago de Cuba.

In addition to more severe food and medicine shortages, the health situation in Cuba has dramatically worsened since the start of the pandemic. According to official figures, Cuba has more than 218,000 cases and 1,431 dead in a country of 11 million people. But many claim that these figures do not reflect the true gravity of the crisis.

“When the people is forced to protest in the middle of the pandemic, is because the tyranny is worst than the virus” #SOSCuba pic.twitter.com/NuvwTOnbvu

The government has admitted that July has seen a “serious rebound” of COVID-19 with more than six thousand cases daily.

Cuba has developed its own three-shot vaccine, but its efficacy has not been confirmed independently and vaccination rates are under 10% of the adult population. The low rate is attributed to both a lack of trust about the Cuban vaccine and the Government’s inability to step up production and distribution.

In a message on radio and television, the president of Cuba, Miguel Díaz Canel, blamed most of the unrest on the US and called upon “all the revolutionaries in the country, all communists, to take to the streets and go to the places where these provocations are going to occur” to counteract protests, thus sparking fear of a civil confrontation.

In a follow-up statement the MCL condemned violence “from any side” and criticized Díaz Canel’s call for violence and confrontation among Cubans.

“May there not be one more day, not one more minute of tyranny subduing the Cubans. Not one more second of submission and lack of hope. No more sorrowful cries; it is time to react and tell the tyrants that their reign of terror and misery has come to an end. Only the people save the people,” the statement said.
Share With:
Previous Article

Why Faith and Religion Are Essenti...