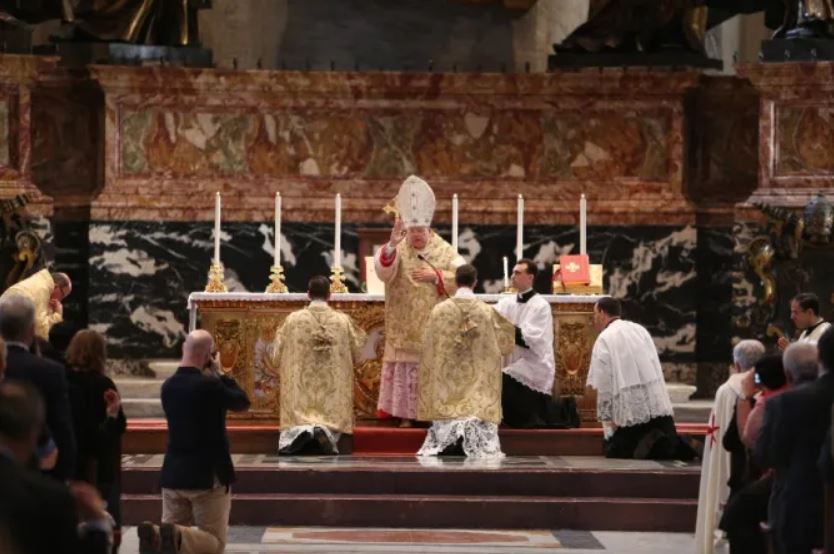 Pope Francis issued a motu proprio on Friday restricting Masses celebrated in the extraordinary form of the Roman Rite.

In the motu proprio, issued July 16, the pope made sweeping changes to his predecessor Benedict XVI’s 2007 apostolic letter Summorum Pontificum, which acknowledged the right of all priests to say Mass using the Roman Missal of 1962.

In an accompanying letter to bishops explaining his decision, Pope Francis wrote: “In defense of the unity of the Body of Christ, I am constrained to revoke the faculty granted by my Predecessors. The distorted use that has been made of this faculty is contrary to the intentions that led to granting the freedom to celebrate the Mass with the Missale Romanum [Roman Missal] of 1962.”

The motu proprio, known as Traditionis custodes (“Guardians of the tradition”) and dedicated to “the use of the Roman Liturgy prior to the reform of 1970,” contains eight articles.

The first describes liturgical books issued by Paul VI and John Paul II after the Second Vatican Council as “the unique expression of the lex orandi [the law of prayer] of the Roman Rite.”

The second states that it is a bishop’s “exclusive competence” to authorize the use of the 1962 Roman Missal in his diocese.

The third sets out the responsibilities of bishops whose dioceses already have one or more groups that offer Mass in the extraordinary form.

It requires bishops to determine that these groups do not deny the validity of Vatican II and the Magisterium.

Bishops are instructed to “designate one or more locations where the faithful adherents of these groups may gather for the eucharistic celebration (not however in the parochial churches and without the erection of new personal parishes).”

The third article also asks the local bishop “to establish at the designated locations the days on which eucharistic celebrations are permitted using the Roman Missal promulgated by St. John XXIII in 1962.”

The motu proprio says that Masses offered according to the 1962 Roman Missal are to use readings “proclaimed in the vernacular language, using translations of the Sacred Scripture approved for liturgical use by the respective episcopal conferences.”

It also calls for the establishment of a diocesan delegate selected by the bishop to oversee the pastoral care for these groups.

“This priest should have at heart not only the correct celebration of the liturgy, but also the pastoral and spiritual care of the faithful,” it states.

Bishops are also told to verify that the already established parishes “are effective for their spiritual growth and to determine whether or not to retain them,” as well as “to take care not to authorize the establishment of new groups.”

The fourth article says that priests ordained after July 16, 2021, who wish to offer the extraordinary form of the Mass will need to submit a formal request to the diocesan bishop who will then consult with the Apostolic See before granting authorization.

The fifth says that priests who already offer the traditional Mass should request authorization from their diocesan bishop to “continue to enjoy this faculty.”

Articles six and seven establish that the Congregation for Divine Worship and the Discipline of the Sacraments and the Congregation for Institutes of Consecrated Life and Societies for Apostolic Life exercise the authority of the Holy See in overseeing these provisions.

The eighth and final article of the motu proprio declares that “previous norms, instructions, permissions, and customs that do not conform to the provisions of the present motu proprio are abrogated.”

In his letter to bishops, Pope Francis explained the reasons behind his decision to limit access to the extraordinary form of the Roman Rite.

He said that the responses to a survey of bishops conducted by the Congregation for the Doctrine of the Faith in 2020 “reveal a situation that preoccupies and saddens me, and persuades me of the need to intervene.”

Francis said that when his predecessors allowed the celebration of the Mass according to the form used before the reforms of Vatican II, they wanted to encourage unity within the Church.

“An opportunity offered by St. John Paul II and, with even greater magnanimity, by Benedict XVI, intended to recover the unity of an ecclesial body with diverse liturgical sensibilities, was exploited to widen the gaps, reinforce the divergences, and encourage disagreements that injure the Church, block her path, and expose her to the peril of division,” he wrote.

The pope said he was saddened that the celebration of the extraordinary form of the Roman rite has become characterized by a rejection of the Second Vatican Council and its liturgical reforms. To doubt the Council, he said, is “to doubt the Holy Spirit himself who guides the Church.”

Pope Francis added that a final reason for his decision was a growing attitude of “rejection of the Church and her institutions in the name of what is called the ‘true Church.’”

He instructed bishops to be guided by two principles when implementing the new norms: “on the one hand, to provide for the good of those who are rooted in the previous form of celebration and need to return in due time to the Roman Rite promulgated by Sts. Paul VI and John Paul II, and, on the other hand, to discontinue the erection of new personal parishes tied more to the desire and wishes of individual priests than to the real need of the ‘holy People of God.’”

In a 2007 letter to the world’s bishops, Benedict XVI explained that Summorum Pontificum enabled priests to offer Mass according to the 1962 Missal as a “Forma extraordinaria,” or extraordinary form, of the Roman Rite.

He noted that the Missal published by Paul VI would remain the “Forma ordinaria,” or ordinary form, of the Rite.

Benedict XVI, who resigned as pope in 2013, insisted that the motu proprio did not detract from the liturgical reforms requested by the Second Vatican Council.

He also rejected suggestions that it would cause divisions within parish communities.

“This fear also strikes me as quite unfounded,” he wrote. “The use of the old Missal presupposes a certain degree of liturgical formation and some knowledge of the Latin language; neither of these is found very often.”

“Already from these concrete presuppositions, it is clearly seen that the new Missal will certainly remain the ordinary Form of the Roman Rite, not only on account of the juridical norms, but also because of the actual situation of the communities of the faithful.”

Rumors about possible restrictions on Summorum Pontificum spread at the end of May after Pope Francis held a closed-door question-and-answer session with the members of the Italian bishops’ conference gathered in Rome for their annual plenary assembly.

Speaking with the bishops, Francis hinted at new regulations, although he did not provide details, according to two bishops who attended the conference.

He insisted that the extraordinary form was not divisive.

“On the contrary, it unites us to our brothers and sisters of all ages, to the saints and martyrs of all times, to those who have fought for their faith and who have found in it an inexhaustible spiritual nourishment,” he wrote in a blog post.

Cardinal Robert Sarah, who retired as prefect of the Vatican Congregation for Divine Worship in February, posted a series of comments on his Twitter account on July 8 defending Summorum Pontificum.

He wrote: “Following the motu proprio Summorum Pontificum, despite difficulties and resistance, the Church embarked on a path of liturgical and spiritual reform, which, though slow, is irreversible.”

“Despite intransigent clerical attitudes in opposition to the venerable Latin-Gregorian liturgy, attitudes typical of the clericalism that Pope Francis has repeatedly denounced, a new generation of young people has emerged in the heart of the Church.”

“This generation is one of young families, who demonstrate that this liturgy has a future because it has a past, a history of holiness and beauty that cannot be erased or abolished overnight.”

The Vatican’s doctrinal congregation asked the world’s bishops last year to report on how Summorum Pontificum was being applied in their dioceses.

Cardinal Luis Ladaria, the prefect of the Congregation for the Doctrine of the Faith (CDF), wrote to the presidents of bishops’ conferences on March 7, 2020, asking them to distribute a nine-point questionnaire.

The CDF survey included questions such as “In your opinion, are there positive or negative aspects of the use of the extraordinary form?” and “How has the motu proprio Summorum Pontificum had an influence on the life of seminaries (the seminary of the diocese) and other formation houses?”

The questionnaire also asked whether the extraordinary form responds “to a true pastoral need” or was “promoted by a single priest.”

Bishops were asked to say whether they personally used the 1962 Missal and what advice they would offer about the extraordinary form.

In his cover letter, Cardinal Ladaria wrote: “Thirteen years after the publication of the motu proprio Summorum Pontificum issued by Pope Benedict XVI, His Holiness Pope Francis wishes to be informed about the current application of the aforementioned document.”

Ladaria asked bishops to send their responses by July 31, 2020.

In his 2007 letter, Benedict XVI asked the world’s bishops “to send to the Holy See an account of your experiences, three years after this motu proprio has taken effect,” in 2010.

In March 2020, the CDF announced that it had issued two decrees giving new Eucharistic prefaces and provision for the optional celebration of more recently named saints in the extraordinary form.

The decree Quo magis provided seven new Eucharistic prefaces for the extraordinary form of the Mass, which may be used for particular occasions, such as votive Masses or the feast days of saints.

How Meriam Ibrahim, Sentenced to D...