Burma’s Catholic bishops call for prayer and fasting after coup 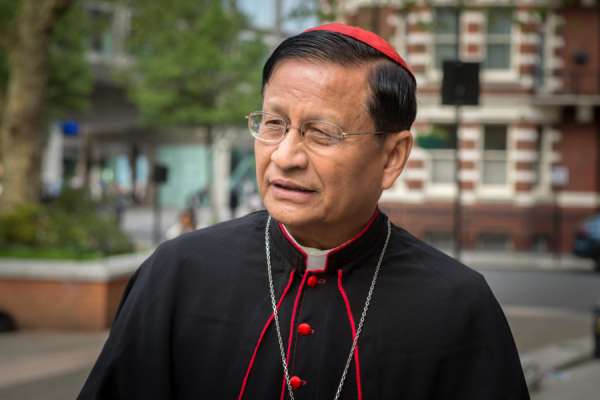 Burma’s Catholic bishops call for prayer and fasting after coup

Rome Newsroom, Feb 5, 2021 / 12:00 pm (CNA).- Catholic bishops in Burma have announced that Feb. 7 will be a day of prayer and fasting for peace in their country following Monday’s military coup.

The Catholic Bishops’ Conference of Myanmar, the country’s official name, released a statement on Feb. 4 asking clergy to offer Mass this Sunday for the intention of “peace in the country” and calling on all Catholics to participate in an hour of adoration, while praying and fasting.

She was detained along with Burma’s President Win Myint and other members of the National League for Democracy (NLD) party when the military seized power on Feb. 1, alleging fraud during last November’s elections, which the NLD won by a landslide.

“I urge you, respect their rights and release them at the earliest. They are not prisoners of war; they are prisoners of a democratic process. You promise democracy; start with releasing them,” Bo wrote on Feb. 3.

The United Nations Security Council has called for the immediate release of those detained and respect for human rights.

U.S. President Joe Biden said on Feb. 1: “The military’s seizure of power in Burma, the detention of Aung San Suu Kyi and other civilian officials, and the declaration of a national state of emergency are a direct assault on the country’s transition to democracy and the rule of law.”

In his message on Feb. 3, Cardinal Bo said that “many leaders of the world have condemned and will condemn this shocking move,” noting that any concern over “allegations of voting irregularities could have been solved by dialogue.”

“How will you gain the trust of our people? They will trust only when words are matched by sincere actions,” the cardinal wrote to Burma’s new military rulers, known as the Tatmadaw.

Following the publication of his message, Burma’s state television showed representatives of the military paying a courtesy visit to the cardinal at his residence in the former capital, Yangon.

Cardinal Vincent Nichols, the president of the bishops’ conference of England and Wales, expressed support for Bo’s message. Burma gained independence from Britain in 1948.

“We support Cardinal Bo in his call for nonviolence, democracy and dialogue. At this critical moment we join in prayer for peace, for the release of all political prisoners and for genuine reconciliation, recognizing the right of Myanmar’s people to determine their own future,” Nichols said on Feb. 4.

Bo, a 72-year-old Salesian, is the first cardinal in the history of Burma, a country with a population of 54 million people bordering China, Laos, Thailand, Bangladesh, and India. Pope Francis made Bo a cardinal in 2015.

Since Bo’s appointment as Archbishop of Yangon in 2003, he has emerged as a leading advocate for democracy in the country.

“We are journeying through most challenging times of our history,” he said this week. “I write with love towards all, seeking a durable solution, praying for an end forever to the periodic darkness that envelops our dear nation.”

Learning to ‘Love in the Ruins’...